21 Oct 2019 – My mother says I should have worn long sleeves for the Palestinian olive trees sometimes do not want to part with their fruits without a bit of resistance.  But somehow I feel the few minor scratches are a badge of honor and the least I owe our beloved trees. The whole year, we look forward to these days. My sister, wife, mother, and I harvested the olive trees sometimes silently, sometimes talking about mundane things, and rarely speaking of things of consequence.  But thoughts are another story.

My thoughts wonder to the Palestinians who lost their olive groves to the colonial settlement activity (over 1 million trees have been uprooted).  The picture of the old women hugging her tree that was being cut by the Israeli occupiers flashes through my mind (see photo below*).  I am reminded of my deceased father during such time. I feel at peace with the sorrow and anger overwhelmed by emotions of gratitude and serenity under the old olive trees. The olive harvest is after all a ritual that borders on an act of worship (and maybe it is).  The stimulation of our senses during the harvest is hard to describe.  It is not just the invigorating smells of the olive leaves and whiffs of olive oil but the shape and feel of each olive as our hands comb the tree like a mother combing her daughter’s hair, the sight of beloved ones tending the same tree before moving to the next.

We smile and greet neighbors who stop by to say hello or comment on the production this year (it is actually a poor year since last year was really good and these things alternate).  The mechanics of the harvest and the post-harvest work become routine for anyone who has done it once.  Old carpets or sheets are spread under the tree.  Olives are dropped onto those (never by hitting the tree!). The gathered olives are separated from leaves and any remaining stems removed (on a “sidr”/tray that is inclined).  They are kept aired out on mats in a dry place while big healthy olives are picked for pickling.

The pickling involves cracking the olives and submerging them in water containing salt, lemon juice, pieces f lemons, and some lemon leaves.  The remaining olives are taken to the press where olive oil is produced.  In the old days, we had a stone press with an animal (donkey or mule) rotating two large circular stones placed in a hollowed stone shaped like a cake pan.  Now the modern presses (made in Turkey) do the operation in no time at all. 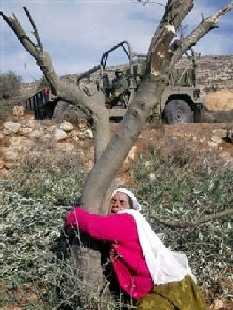 Mahfoutha Shtaya, 65 year old who “inspired us when she stood up to Israeli soldiers and settlers in 2004 when they were uprooting hundreds of olive trees in her village-the source of her community’s livelihood. Alone and defenseless, she clung to one of the few trees left standing. Her action spoke out powerfully against the wanton destruction and its disastrous effects for an already suffering people” http://www.opendemocracy.net/blog/5050?page=7

It is hard to describe to non-Palestinians what the olive tree means to us.  We could tell of the practical things but that would be like saying our spouses mean a lot to us because of … (and then list all the things they do).  Of course these things are important but not the whole picture and we could never do justice that way to people or other living things we love.  But just like listing what people do help others visualize their character, so it is with the beloved olive tree.  Palestinians over the past 5000 years have cultivated olive trees and derived great benefit from these wonderful hardy trees:

Here are a few pictures taken by my wife of our harvest, pickling and squeezing of olives to get our yearly supply of these trees:

Olive production is always high in one year low in the next**. Last year was high, this year was low and next year (Inshallah) it will be higher barring further destruction by Israel as happened in Gaza recently. In the meantime, we still enjoy our olives and hope that you will come visit us in Palestine so that we can serve you some of the fantastic dishes that include olives or their products and we can do it under the olive trees.  I also noted this interesting story of a Palestinian in China proving again that you can take Palestinians outside of Palestine but you cannot take Palestine outside of Palestinians:

The Olive tree: a folkloric briefing from Bethlehem University