30 Sep 2019 – The United Nations General Assembly meets every year in September in New York City. All countries of the world are members of the UNGA in contrast to the UN Security Council, which has only five permanent members: USA, England, France, Russia and China.

The leaders of all countries — Presidents, Prime Ministers, Kings or their Foreign Ministers come to New York and address the UN. Narendra Modi the Indian Prime Minister also made a wholesome, brilliant speech of about 25 minutes on 27 September. As usual, he spoke in Hindi.

But before this address Modi had been invited to an unusual event named Howdi Modi on 22 September in Houston, Texas. He addressed the large crowd of fifty thousand, mostly Indian Diaspora. But the unique part of this event was the presence of the US President Donald Trump who also made some positive remarks about Modi and how he was leading India to prosperity and peace. But more than the words he spoke, his presence at the event itself was a strong signal about his appreciation of the Indian Prime Minister.

This was reinforced by the rather strange remark in his unique style that Modi was like a father figure of India. This remark was quickly captured by the Indian politicians who are politically opposed to Modi back home in India to say that Gandhi was the Father of the Nation (India); by making the remark about Modi, Donald Trump had insulted Gandhi and India.

As is common, the UNGA is a platform not only to make speeches by leaders of different countries, it also provides an opportunity for the leaders to meet each other on the sidelines. Most leaders avail of this opportunity and Modi is no exception. But what was remarkable was the fact that those leaders or presidents who met Modi would start the meeting by saying Howdi Modi as a means of saying Hello, how are you?

The United Nations provided a platform for another important issue that is of great concern to the world at large. This is the issue of global warming and climate change that has serious consequences if not addressed sincerely and vigorously by all countries. The session called Climate Action Summit was chaired by the UN Secretary General Antonio Guterres — Portuguese diplomat and former UN High Commissioner for Refugees. He spoke about the important issues facing the world including the problem of environmental pollution and climate change. He also urged leaders to act together to meet the challenge.

Other leaders also addressed this issue. Mr. Modi pointed out that although the Indian per capita production of toxic gases of pollution were much less than those of the rich western countries especially USA, because India’s population was large, it was a critical problem in India also. He informed that among the positive actions already initiated by India was the institution of International Solar Alliance (ISA) with France for production of solar energy.  Another step in this direction was to ban single use plastics from 2nd October, the 150th birth anniversary of Mahatma Gandhi. As is well known there are thousands of tonnes of plastics that are polluting the lands and oceans of our planet. He also talked of steps being taken to stop desertification of soil and farms in India. He stressed that Gandhi himself was aware of the issue of keeping nature clean by not over exploiting the resources of Mother Earth.

Perhaps the most genuine and impassioned speech made at the Climate Summit regarding pollution, climate change and loss of wildlife  was by the young brilliant 16-year-old student Greta Thunberg of Sweden. How she was allowed to speak at the UNGA is an interesting story in itself but what she said electrified the delegates, who applauded her. She made some brilliant points in her simple English.

“I want you to act as if the house was on fire. Many politicians have told me that it is not a good idea to panic. But when your house is on fire then it requires some level of panic to prevent your house from burning to the ground. We are in the midst of sixth mass extinction and the extinction rate is ten thousand times faster than what is considered normal. With up to 200 species becoming extinct every day, erosion of fertile top soil, deforestation of our great forests due to toxic air, loss of insects and wildlife, the acidification of our oceans …”

And here she almost broke down with emotion. But she continued, 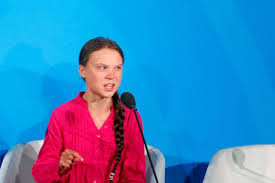 Greta Thunberg at the UNGA

Greta received a thunderous applause for her sincerity and asking the world leaders to act now. She is possibly in line for the Nobel Peace Prize.

As indicated earlier, other speakers including the Indian Prime Minister made significant speeches regarding climate change, rising sea levels, importance of renewable sources of energy, avoidance of plastics etc. But undoubtedly the address of the sixteen year old Greta Thunberg was unique and received universal acclaim. Hopefully the world leaders will sit down and take suitable steps to prevent the situation from becoming worse.

But several scholars including Robert Burrowes (The Global Climate Movement Is Failing: Why?) have pointed out that we must try to understand the political, economic, social factors leading to the environmental catastrophe. He has also urged people to make a pledge of living simply and not aggravating the earth’s resources.

Yes, we know that Gandhi had also urged people to live simply and not to over exploit the Earth’s resources. He had simply said,

‘There is enough for peoples’ needs but not for their greed.’

Unfortunately the economic political system that prevails globally does not allow people and countries to lead simple lives that are non-polluting.

We must try to change this paradigm to live in peace and harmony with other peoples, other countries and with our ecosystem.

Anticopyright: Editorials and articles originated on TMS may be freely reprinted, disseminated, translated and used as background material, provided an acknowledgement and link to the source, TMS: UNGA — Meeting Ground for Discussion, Debate and Decisions, is included. Thank you.