There are dozens of varieties of bananas in India and abroad. Some are long, some short, some rather thin or a little fat. Their colours also vary from being yellowish or greenish etc. Obviously the colour or size depends on the region and the soil where the banana trees grow. Weather also plays an important role — they generally grow in temperate climates — neither too cold nor too hot. Kerala in South India produces a large number of different varieties of the fruit. The tree’s leaves are green and large in size — large enough to act as natural plates for people to even have their rice and dhal served on these leaves. Banana chips are also very popular.

Not only most people like the fruit for its taste and nutritional value, even monkeys love bananas. Wherever bananas are made available, one will find hordes of monkeys relishing the fruit. In many parts of India including its capital Delhi, one sees large number of monkeys near forested lands usually called ridge where many trees of different varieties are found. 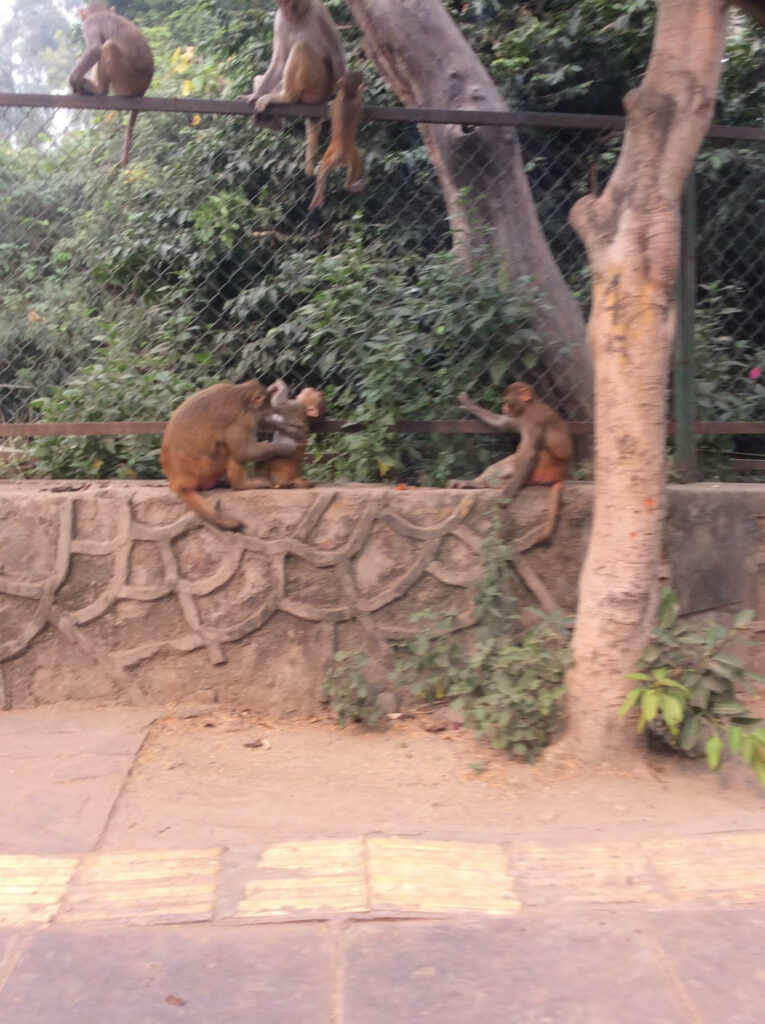 In the region where I live near the Delhi University Campus, large forested lands are found despite the construction of roads and buildings. These forests are ideal places for monkeys to live and their numbers to grow. It is estimated that there are tens of thousands of monkeys that have made these forests their homes. One can see older and baby monkeys in these areas. A baby monkey clinging to its mother while she jumps from one tree to another is a beautiful sight. These animals can perform many other acrobatics.

As I have indicated, these trees are located next to several roads or by lanes near the University. Any one passing by on foot or on their vehicles will observe large number of people serving bananas to these animals. In fact several fruit sellers have their carts located next to the forests so that people can easily buy bananas for these creatures. The fruit sellers make good business.

Why do people buy and serve bananas to monkeys? In the Hindu faith, Hanuman, the legendary follower of Lord Ram, looks like a monkey and can even jump over mountains and hills in the service of Ram Bhagwan. It is no surprise that many people who serve bananas to the hordes of monkeys feel that they are serving the brave Hanuman.  Their faith fortifies them and serves the fruit in large numbers. 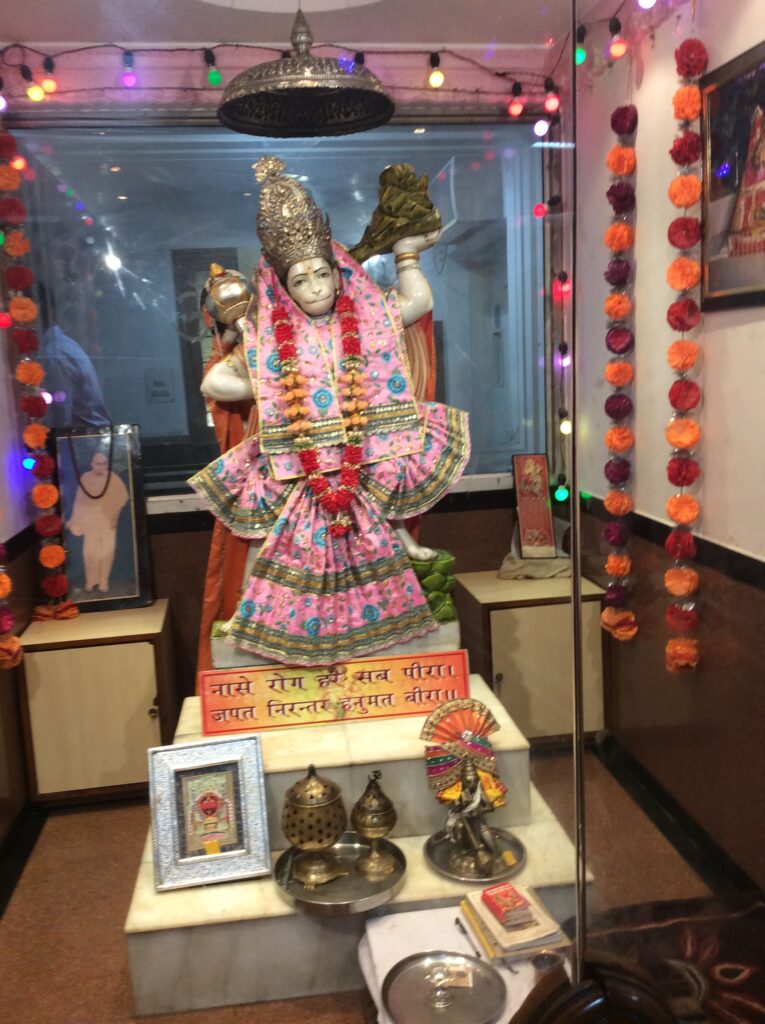 Sometimes this turns a little comical. Once I was buying some bananas for my family. I had kept my reading glasses on the banana cart. Suddenly a monkey jumps down from its tree perch, picks up my glasses and jumps back on to the tree. What to do now? “Don’t worry; just offer a banana to the creature”. I do as suggested and within seconds the animal picks up the offered fruit and throws my glasses. Fortunately, the glasses were not damaged.

The same cannot be said about TMS editor Antonio C.S. Rosa who told me he had his eyeglasses smashed by a monkey which had snapped it out of his face a few seconds before someone pitched a banana in the air for the monkey to grab and let go of the spectacles; but it was too late. Plus, he had to pay for the banana thrown by a nearby vendor. Later he joked that the monkey and the fruit seller could have been ‘partners in crime.’ He still has the pair of glasses made in a hurry in a local optical store. This happened in the holy city of Vrindavan, near Delhi, where Lord Krishna was born and spent His youth years. People say it is quite a regular occurrence there. 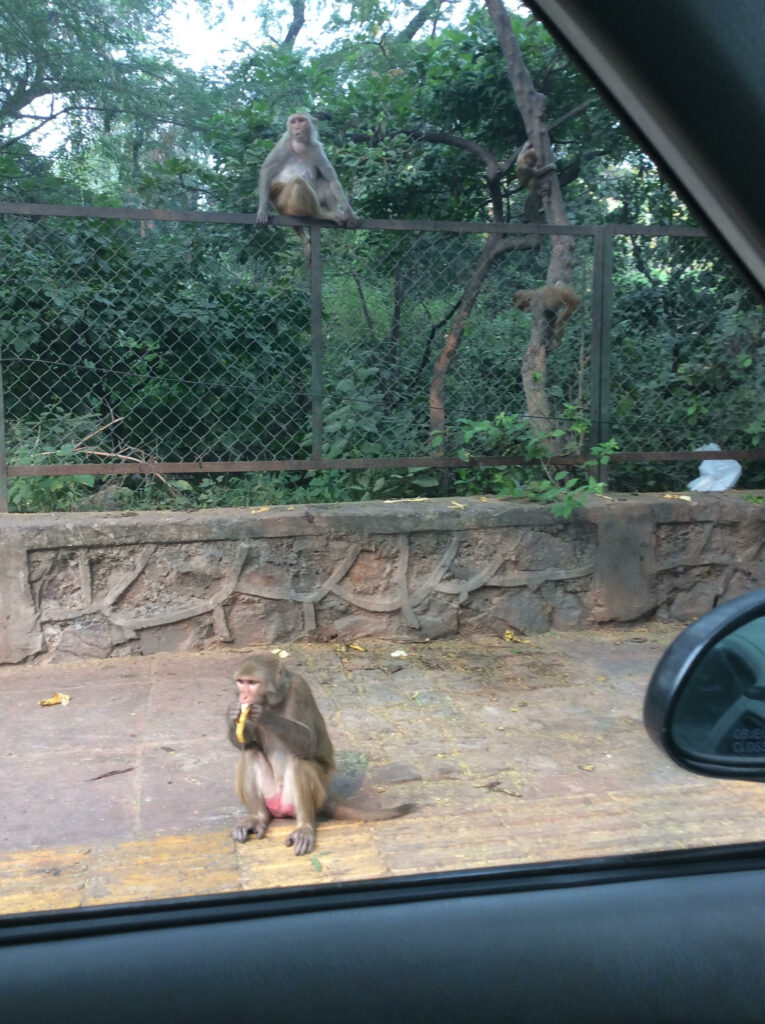 Another occasion when the front door of my residence was open, a monkey quietly entered my home picked up a banana that was lying on the dining table and quickly walked out without saying  thank you. But occasionally when they are hungry, monkeys may bite people and then one has to go to a doctor for getting rabies injection.

In many places these animals have become a menace. But how to tackle the problem since faith is involved? Local agencies have tried various means without much success in curbing their numbers. One knows that the Indian population is the second largest in the world, but the population of these divine animals is probably the largest. He Ram.

Anticopyright: Editorials and articles originated on TMS may be freely reprinted, disseminated, translated and used as background material, provided an acknowledgement and link to the source, TMS: Banana Party–Serving Divinity, is included. Thank you.