Bolivia in Crisis: How Evo Morales Was Forced Out

12 Nov 2019 – Evo Morales has left Bolivia on a plane for Mexico, a day after he resigned as president. Morales and his vice-president, Álvaro García Linera, stood down from office on November 10, following a ‘suggestion’ by the head of the military, Williams Kaliman.

Met with jubilation and despair by different sectors of Bolivian society, the resignations were the culmination of weeks of unrest following presidential and parliamentary elections on October 20. Morales initially appeared to have won in the first round, but the whole process was overshadowed by accusations of electoral fraud and the spectre of military intervention.

Nothing at the moment is black and white. The events represent both a military coup d’état and a moment of mass protest that unseated the government.

For and Against Morales

The social base of Morales’s political party, Movement Towards Socialism (MAS), are the peasant organisations of the Andean highlands altiplano and the semi-tropical valleys of Cochabamba, alongside a group of unions and federations which represent peasants and rural proletarian labourers. They have an organic relationship with the MAS and as such will all turn out to vote for and defend it on the streets.

This hard core of social support is complemented by those who work in sectors that have benefited from the politics of the MAS. These include swaths of the informal petty commodity producers and hidden wage labourers found in the popular economy, miners employed by both the state and cooperatives, and sections of the lower middle and professional classes who feel Morales has reduced the stigma they confront in their day-to-day lives. These groups, as I examined in my own PhD research, felt excluded and unrepresented within the liberal parliamentary democracy before the election of Morales in 2006.

The opposition to Morales is also comprised of multiple different – and contradictory – currents. First, there is a group concerned with the abstract notion of representative democracy, comprised of the urban middle-classes and university students. This is probably the largest opposition group and is found in all nine departmental capitals.

The second are indigenous groups which do not share the developmental agenda of the MAS government, and are in the pathways of extractive or large-scale infrastructure projects. The most visible of this opposition has come from the lowland indigenous groups, particularly those in the Isiboro Sécure National Park and Indigenous Territory and groups in the Chaco regions affected by hydrocarbon extraction. Others include groups in the Madidi national park opposing the megadams Bala and Chapete and the ayllus, socio-territorial units of Aymara indigenous communities, of North Potosí.

Increasingly powerful regional opposition groups are also concerned with the distribution of power and resources within the country. The indigenous opposition to Morales in the city of Potosí can be categorised as part of this group, as can the civic committees of the departments of Beni, Pando, Santa Cruz and Tarija. 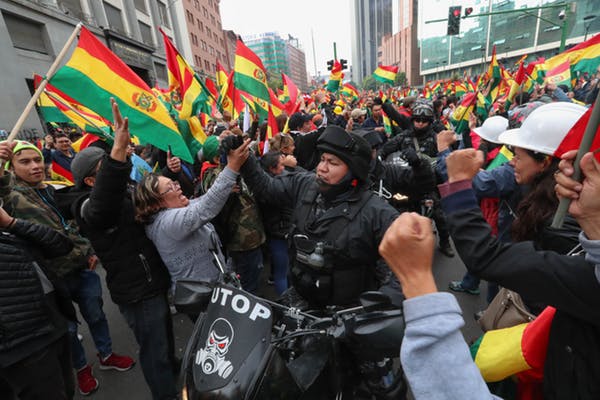 Time accelerated in the period following presidential and parliamentary elections in Bolivia on October 20, with a decade’s worth of political events unfolding in the space of a couple of weeks, reorienting the political terrain. Yet time has also slowed down, with observers from afar looking on as if at a car crash in slow motion.

That Morales and García Linera stood down at the behest of the military is no surprise, and the possibility of a coup became increasingly likely in the days of protests and civic strikes between election day and November 10.

But the story of a coup d’état is by no means the whole story – and the ability of the three opposition groups to construct a multitude of popular forces powerful enough to direct the political currents in this moment has been astounding. In the wake of the election, the city of Santa Cruz was shut down for weeks by a general strike – the longest in the city’s history – while the streets of La Paz, Oruro, Potosí and Cochabamba were also barricaded.

The disorganised masses who congregated and burnt down vote counting stations in Oruro, Potosí, Santa Cruz and Tarija following the suspension of the quick count broadcast on the night of October 20, coalesced into a movement strong enough to coordinate and sustain political activity against the MAS government.

During Morales’s final days in office, they were joined by social groups once supportive of the MAS, including the Bolivian Workers’ Central. In this sense, the resignation of Morales and García Linera follows weeks of massive social protest.

Probably the most remarkable dynamic in this sped-up unfurling of history is the emergence of Luis Fernando Camacho, head of the Pro Santa Cruz Committee, from the backwaters of regional, right-wing politics in Santa Cruz to a political figure on the national scene. The arrival of the evangelical right to Bolivian politics – first in the form of presidential candidate Chi Hyun Chung and now in the figure of Camacho – has been a long time coming, but is nothing to celebrate.

Camacho, who speaks of bringing the bible to Bolivian politics, has been one of the more prominent figures calling for military intervention. The far-right currents in the opposition movements have created the conditions that allowed more extreme opposition groups to burn down the houses of several prominent MAS allies during the night of November 9.

These acts of violence, coupled with the initial findings of an audit of the election by the Organisation of American States of the elections, led Morales to call for new elections, overseen by a reconstituted Supreme Electoral Tribunal. But by the day of Morales’s resignation the demands of many protesters had surpassed the call for new elections and now only Morales’s exit would do. 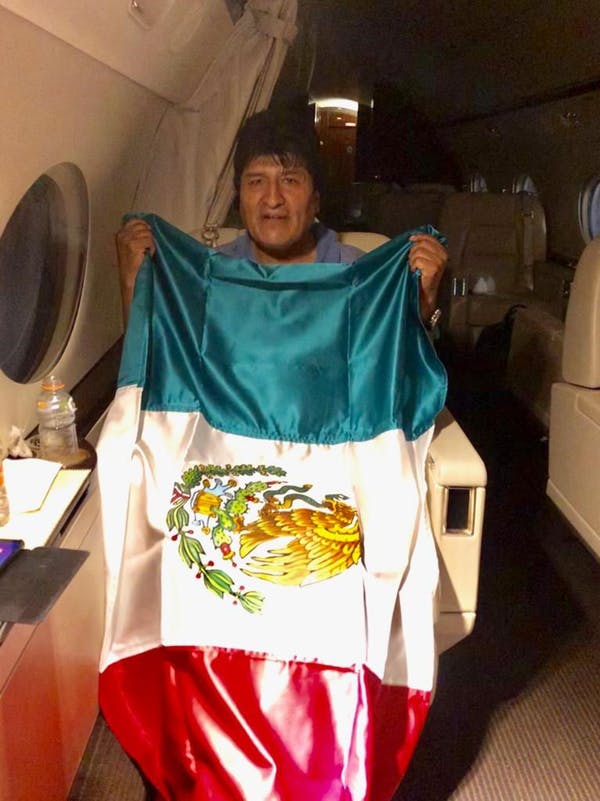 A handout photo from the Mexican foreign ministry of Evo Morales on a plane to Mexico.
EPA

In the wake of the resignations, both Carlos Mesa, Morales’s main electoral opponent and Camacho demanded new elections without the participation of Morales. The urban support base of the MAS took to the streets in violent protest.

The preliminary report from the OAS audit into electoral fraud – whose methodology has been questioned by some experts – stated that even though there were numerous voting irregularities, it’s highly probable that Morales would have captured the largest share of the vote anyway.

Without Morales on the ballot paper in a future election, a large section of the electorate will not be able to vote for their candidate. This is a situation that some will call justice, given the way Morales skirted around the constitutional term limits, but that will leave a large, mainly rural, indigenous section of the population disenfranchised. Such frustration will lead to further violence if left unresolved.

The resignation of Morales and García Linera has now left a power vacuum. The deputy head of the senate, Jeanine Anez, is likely to step into the breach as interim president, but the route to new elections under a reconstituted Supreme Electoral Tribunal remains far from clear.

In 1983, Bolivian social theorist René Zavaleta Mercado noted the inability of Bolivian democracy to represent its sociedad abigarrada – its motley society. In 2019, the route forward appears to be the exclusion of a large proportion of Bolivians. The wiphala, the square banner that has long been a symbol of indigenous peoples and resistance, has been torn from government buildings and unceremoniously burnt.

If Camacho’s proclamation that “Pachamama (indigenous people) will never return to the palace. Bolivia is Christ” is anything to go by, Bolivian democracy remains incapable of managing the country’s motley society.