26 Oct 2019 – In a blatant attempt to obstruct justice, British judicial authorities are stymieing an investigation into the US Central Intelligence Agency’s (CIA) illegal spying on WikiLeaks’ publisher Julian Assange. El Pais reported on Wednesday [23 Oct] that a request by Spanish judge José de la Mata to interview Assange via videolink had been rejected by the United Kingdom Central Authority last month. De la Mata is investigating a complaint by Assange’s lawyers alleging that UC Global, the private company hired to provide security to Ecuador’s London embassy, illegally surveilled him on behalf of US authorities while he was protected with political asylum inside the building. 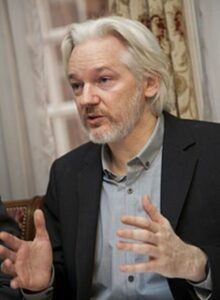 The decision further demonstrates that the British judiciary and the country’s political establishment are acting as the accomplices of the US government’s attempt to destroy Assange. El Pais’ revelation follows a case management hearing on Monday, over the US attempt to extradite Assange, that can only be described as a lawless show trial.

The presiding judge, Vanessa Baraitser, dismissed arguments that should have led to the immediate dismissal of the American case, including a ban on extraditions from Britain to the US for political offences. She exuded indifference to the deterioration of Assange’s health, and waved away his lawyer’s statements about the CIA spying, despite its blatant criminality.

Information about the surveillance operation was first reported by El Pais last month. It revealed that UC Global’s David Morales came into contact with US officials in 2015 and agreed to furnish them with confidential information about Assange.

Over the following two years, the spying dramatically escalated. It included live video and audio feeds from inside the embassy, which were streamed to CIA offices in Langley, Virginia. Every area of the building, including the women’s toilet, was under surveillance.

The spying covered Assange’s privileged conversations with his lawyers, and private consultations with doctors. It allegedly came to include the theft of his legal and medical documents. A diaper was even DNA-tested to see if Assange was the father of a baby who had been brought to the building.

The WikiLeaks founder’s visitors were also scrutinised. A follow-up report in El Pais indicated that US visitors, along with lawyers and journalists, were particularly targeted. Details of their personal documents and their electronic devices, including information that could be used to hack their phone, was transmitted by UC Global to the CIA.

The extent of the surveillance is known, in part, because copies of the material were in the possession of a group of Spanish criminals. Earlier this year, they sought to extort millions of euros in exchange for videos, photos and audio recordings of Assange and his visitors.

On behalf of the United Kingdom Central Authority, Rashid Begun rejected the request, claiming that “these types of interviews are only done by the police” in Britain, that the events described by de la Mata were “unclear” and that the Spanish judge may not have jurisdiction to authorise the interview.

In a reply cited by El Pais, de la Mata rejected these assertions. He reportedly noted previous cases, in which the British authority had accepted similar requests, and said that the only obstacle would be if the interviewee was accused of a crime. He reminded the British, however, that “in this case, Julian Assange is a witness, not an accused party.”

De la Mata wrote: “The Spanish judicial system has jurisdiction and is able to hear cases of crimes committed by Spanish citizens outside of the country as long as the event is a crime in the place where it was committed, the victim or the public prosecutor present a criminal complaint, and the suspect has not been sentenced or acquitted in another country.”

Assange’s complaint, he insisted, met all of these criteria.

EIO’s are granted on a daily basis between European Union member states. The British decision to reject the Spanish request is clearly a political one. El Pais bluntly stated that it “is being viewed by Spanish judicial bodies as a show of resistance against the consequences that the case could have on the process to extradite the Australian cyberactivist to the United States.”

The central role of CIA spying in the attempted American prosecution of Assange renders it illegal under international law and in violation of the US Constitution.

In the 1970s, the US administration of President Richard Nixon moved to prosecute Daniel Ellsberg under the Espionage Act, the same legislation being used against Assange. Ellsberg, as a senior government employee, had leaked the Pentagon Papers exposing the extent of US criminality in the Vietnam war.

The attempt to prosecute the whistleblower fell apart after it emerged that the government had conducted warrantless spying against him. The illegal surveillance included wiretaps and violations of Ellsberg’s doctor-client privilege.

The unlawful spying on Assange is of an even greater order of magnitude. As his lawyers argued in court on Monday, it should result in the immediate dismissal of the US extradition case.

Baraitser, like Rashid Begun, however, was not interested. During the hearing, US officials, representing the very same government that violated Assange’s rights, were visibly holding sway in the courtroom.

According to former British diplomat Craig Murray and others present, the US officials were repeatedly involved in discussions with British prosecutors and appeared to be coaching them.

The British prosecutors were particularly hostile to a request by Assange’s lawyers for a three-month delay to the full extradition hearing scheduled for February. They insisted that the case continue on the “timetable” dictated by the US government, a request that was upheld by Baraitser.

The likely reason for the bitter opposition to any delay in both Washington and London, is that evidence from the ongoing Spanish case will further undermine the already discredited extradition case and place legal obstacles in the way of Assange’s dispatch to the US.