Deforestation in Brazil Jumped by 80% in One Year: Study

About 14 percent took place in protected conservation areas and 7 percent in Indigenous territories, according to the report. 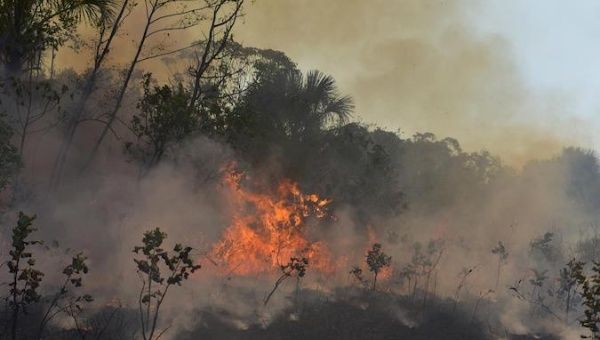 7 Nov 2019 – Deforestation in Brazil’s Amazon region increased by 80 percent in September compared to the same month last year, according to a private study released yesterday stating that 802 square kilometers of forest was lost in the zone.

The Amazon Institute of People and the Environment (Imazon), which has been analyzing the planet’s largest tropical forest for the past three decades, said in its report that the largest portion of the deforestation (48 percent of the total) occurred on private lands.

Another 31 percent occurred in settlements, while 14 percent took place in protected conservation areas and 7 percent in Indigenous territories.

The Brazilian states most affected by the cutting down of trees in Amazonia, which spans nine federal entities, were Para (53 percent), Rondonia (13 percent), Amazonas (11 percent), Acre (11 percent) and Mato Grosso (10 percent).

Imazon is a non-profit organization based in Belem, Brazil, and made up of Brazilian researchers dedicated to conserving the Amazon rainforest. The personnel working there use satellite data to monitor the Amazon and issue figures on deforestation throughout the region.

Environmental and human rights organizations have confirmed that criminal networks are behind the indiscriminate cutting of trees in the region, and that after the illegal lumbering, those deforested zones are burned to make the land suitable for livestock raising and agriculture.

In August, fires in the Brazilian Amazon were the worst in a decade, a situation that was denounced worldwide, especially the anti-ecological policies of President Jair Bolsonaro and his poor response to stop the fires.

The number of fires finally declined in September and October, although more broke out in the Pantanal, considered to be one of the world’s largest tropical wetlands.

The criminal groups allegedly operating in the Amazon also use violence against environmental officials, activists and Indigenous leaders who live in, and attempt to protect, the region.

Last Friday, a “forest guardian” on a preserve in northeastern Maranhao state was shot dead and another wounded in an ambush allegedly staged by illegal woodcutters.

According to a report by the Indigenous Missionary Council (Cimi), an entity linked to the Catholic Church, invasions of indigenous lands in Brazil increased by 44 percent in the first nine months of this year, a period coinciding with Bolsonaro’s time in office so far, and have already exceeded the lands seized during all of 2018.

The ultrarightist leader, along with other countries, supports exploiting the Amazon region’s mineral resources. In September, during his first speech before the United Nations General Assembly, Bolsonaro claimed that it was a “fallacy” to say that Amazonia is an asset belonging to all of humanity.