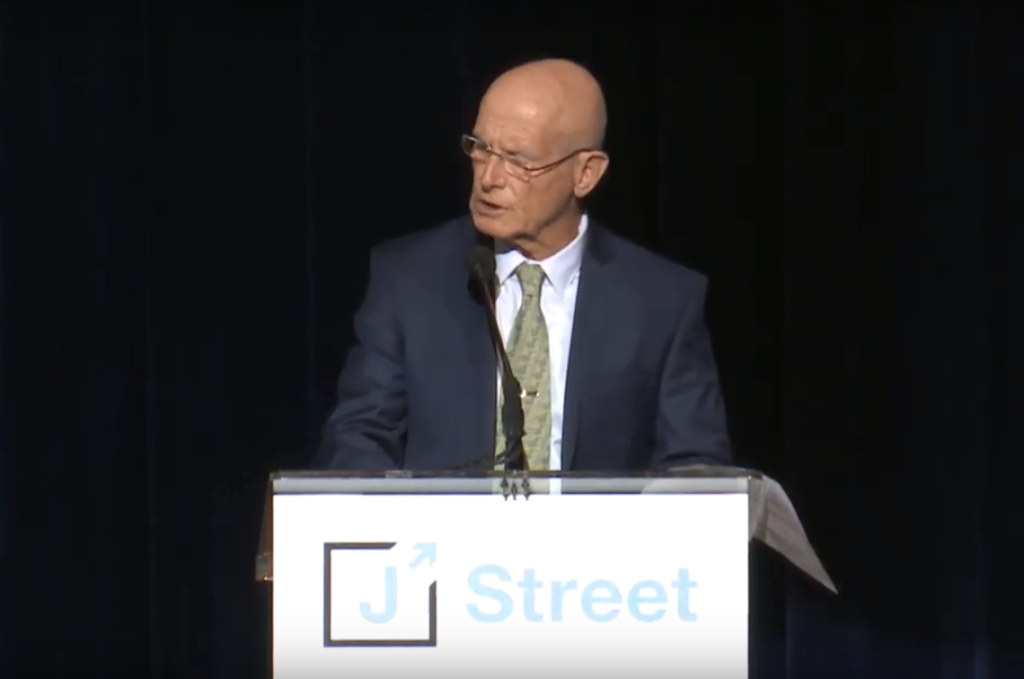 5 Nov 2019 – Last week a former Israeli security official urged American Jews to restrain Israel’s “unjust” war in Palestine because it fuels anti-Semitism around the world. The statement is remarkable because that view is generally seen as anathema: saying that Israel’s actions have any role in the growth of anti-Semitism.

Ami Ayalon, a Navy commander and former head of the Shin Bet, spoke at J Street last week and said that Israelis believe they are fighting a just war of defense for their existence, and that the world refuses to acknowledge that. But in fact Israel’s existence is established, and American Jews can see that Israel is engaged in an unjust war. (Emphasis mine)

What you see from the outside is us fighting two separate, totally different wars. The first is indeed a just war, a war to establish Israel within the 1967 borders based on international resolutions. You correctly say that we have won that war….

We continue to fight a second war, a war in order to expand our border to the east, to build more settlements, and to prevent the establishment of a Palestinian state next door. That second war is not a just war. It denies the Palestinians the right to self determination, which was recognized by the international community. As a former commander of the Navy and director of the Shin Bet, as a person who fought in too many wars, as someone who represents the views of a vast majority of the IDF top command, past and present, I tell you today that the second war, the unjust one, cannot be won with force alone. There is no military decision in this war. That is why unless we choose a totally different approach, this war will continue for generations to come, it will lead to more violence and terror. After we beat Hamas and Islamic Jihad, we will face ISIS. And after that, who knows what will come.

But I can assure you it will definitely be more extremist. This second war to expand our borders will isolate Israel even more and increase anti-Semitism around the world, but the most important thing, the most dangerous thing, is that this war will be the end of Israel as the founding fathers of Zionism envisioned it. I’m here to tell you that the question of which war we are sending our young men into is tearing Israeli society apart…

You see that reality. We in Israel refuse to see it. We cannot see it. We are too close to the events, we are in too much pain to see clearly. We still use the language of guilt, not of responsibility. We need you by our side on this long and hard road. We need you to tell us the truth the way you see it. So when we say [Hebrew phrase] which means, All Israel are responsible for each other, we are in a way saying, You have the right, and in times of crisis, like today when you see the writing on the wall and we do not or cannot, you also have the duty to stand up and tell us your truth. This is the real meaning of mutual responsibility.

Ayalon’s comments are similar to those of the former Episcopal chaplain at Yale, Bruce Shipman, for which he lost his job five years ago. In the wake of the 2014 Gaza slaughter, Shipman wrote to the New York Times and said there was a “relationship between Israel’s policies in the West Bank and Gaza and growing anti-Semitism in Europe and beyond.”

[Growing anti-Semitism] parallels the carnage in Gaza over the last five years, not to mention the perpetually stalled peace talks and the continuing occupation of the West Bank.

As hope for a two-state solution fades and Palestinian casualties continue to mount, the best antidote to anti-Semitism would be for Israel’s patrons abroad to press the government of Prime Minister Benjamin Netanyahu for final-status resolution to the Palestinian question.

Shipman was lambasted for blaming the victim and making Jews responsible for Israel’s actions. “If, according to Rev. Shipman’s view, the antidote for anti-Semitism is a solution to the Palestinian question, then he should share with us the antidote for the Spanish Inquisition, the pogroms of Eastern Europe, and Hitler’s Germany,” Yale graduate Michael Katz wrote to the school paper. While Mark Oppenheimer wrote in Tablet that Shipman was blaming American Jews in a bigoted way. “Next time an innocent Jewish man or woman is shot in Brussels, rather than complain about anti-Semites, I will ring up Prime Minister Netanyahu and complain about his war policy. And next time 1,400 children are abducted, beaten, raped, and sex-trafficked in England, rather than decry sex-trafficking and child-rape, I will demand that you [Shipman] ring up the Queen.”

Ayalon said just that: that in the spirit of one Jewish people, American Jews should tell Israel to stop making wars.

Philip Weiss is senior editor of Mondoweiss.net and founded the site in 2005-06.