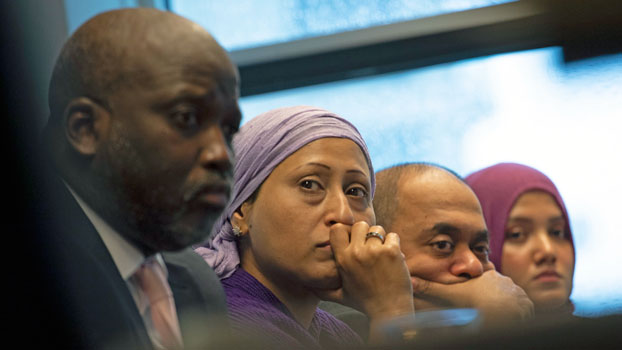 Representatives from the Rohingya community and Gambia’s Justice Minister Aboubacarr Marie Tambadou (L) listen to testimony during a press conference in The Hague, the Netherlands, where the West African nation filed a case at the International Court of Justice accusing Myanmar of genocide against Rohingya Muslims, Nov. 11, 2019. Associated Press

11 Nov 2019 – Gambia today filed a lawsuit against Myanmar in the highest court of the United Nations, accusing the Southeast Asia nation of state-sponsored genocide for the brutal military-led crackdown against Rohingya Muslims in 2017 that left thousands dead and drove more than 740,000 across the border into Bangladesh.

Myanmar has largely denied that its forces were responsible for widespread violence that included indiscriminate killings, mass rape, torture, and the burning of Rohingya villages in Rakhine state, saying its measures were a justified response to deadly attacks on police outposts by a militant Rohingya group.

Gambia, a predominantly Muslim African country, filed the case with the International Court of Justice (ICJ) in The Hague, the Netherlands, on behalf of the Organization of Islamic Cooperation (OIC), a group of 57 Muslim countries.

The lawsuit alleges that Buddhist-majority Myanmar breached the Convention on the Prevention and Punishment of the Crime of Genocide, adopted by the U.N. in 1948, with the military-led crackdown targeting the Rohingya minority.

It also asks the ICJ to order Myanmar to cease and desist from all acts of genocide, to punish those responsible, including senior government officials and military officers, and to issue reparations to victims, according to a statement issued by Foley Hoag LLC, the international law firm assisting Gambia with the case.

“The Gambia is taking this action to seek justice and accountability for the genocide being committed by Myanmar against the Rohingya, and to uphold and strengthen the global norm against genocide that is binding upon all states,” the West African nation’s justice minister and attorney general, Aboubacarr Marie Tambadou, said in a statement, according to news agencies.

Gambia has also called for urgent provisional measures “to stop Myanmar’s genocidal conduct immediately” to prevent further harm to the Rohingya while the case is pending, Foley Hoag’s statement said.

The court is expected to hold oral hearings on the request in December, it said.

Myanmar government officials have not yet issued a response, but Hau Do Suan, Myanmar’s ambassador to the U.N., told RFA’s Myanmar Service Monday that Myanmar and Bangladesh should resolve the issue themselves.

“As far as we know, Gambia has been assigned to the task by the decision from the OIC ministerial meeting to prosecute Myanmar for the displaced Muslims,” he said. “In my opinion, the issue we have here is between Myanmar and Bangladesh. It has nothing to do with the OIC or Gambia.”

Hau Do Suan said he did not have any other comments to make since lawsuit was just submitted today.

“But the point is the ICJ is meant to settle disputes between member countries for issues like border disputes or legal disputes,” he said. “As far as I know, there has never been a single lawsuit on settling humanitarian issues. Now, since they have filed the lawsuit formally, we have to face the proceeding through legal means.”

“This is an issue to be resolved bilaterally between Myanmar and Bangladesh,” he said. “It is obvious that they are trying to utilize international pressure instead of helping to resolve this humanitarian issue.”

“This is good news that OIC is taking some responsibility,” he said.

Shahriar Alam, a junior minister at Bangladesh’s Ministry of Foreign Affairs, told BenarNews, an RFA-affiliated online news service, in Dhaka that the lawsuit was filed after the OIC appointed lawyers and created a committee.

“The committee discussed the issue and later, at a meeting of foreign ministers, a resolution was adopted to file a case,” Alam said. “It took a few days for preparation and appointment of lawyers.”

In March, the OIC unanimously adopted a resolution to pursue legal recourse through the ICJ, which settles disputes between nations, to seek accountability and justice for human rights violations committed against the Rohingya in Myanmar. 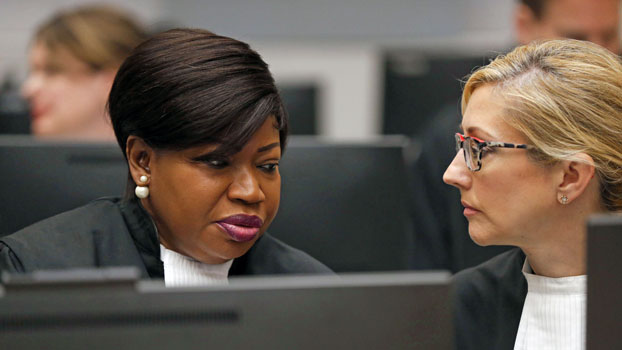 Fatou Bensouda (L), top prosecutor at the International Criminal Court, sits in one of the body’s courtrooms at The Hague, the Netherlands, July 8, 2019. Credit: AFP

Rights groups said they were pleased by the latest action to hold Myanmar accountable for violations against the Rohingya.

“We Rohingya welcome Gambia’s lawsuit against Myanmar,” Tun Khin, president of the Burmese Rohingya Organisation UK (BROUK), told RFA. “I think this lawsuit will be very effective since Myanmar is one of the signatories of the Genocide Convention.”

“Government-to-government lawsuits are more likely to proceed because only that kind of action will save the Rohingya from genocide,” he said. “Otherwise, it will keep going on for many years to come. We don’t know how long these atrocities will keep happening in the future since it is part of government policy.”

“The Gambia’s legal action triggers a judicial process before the world’s highest court that could determine that Myanmar’s atrocities against the Rohingya violate the Genocide Convention,” said Param-Preet Singh, HRW’s associate international justice director. “The court’s prompt adoption of provisional measures could help stop the worst ongoing abuses against the Rohingya in Myanmar.”

Southeast Asia-based Fortify Rights called on U.N. member states to support Gambia’s case against Myanmar for failing to prevent or punish genocide against the Rohingya.

“Governments have condemned atrocities against Rohingya in Myanmar, but now it’s time to act,” said Matthew Smith, the group’s chief executive officer, in a printed statement.

“The Gambia’s leadership on this issue is monumental, and its government shouldn’t have to do it alone,” he said. “States can start by providing financial, diplomatic, and substantive support through public statements and submissions to the court on interpretations of the genocide convention.”

An Independent International Fact-Finding Mission (FFM) appointed by the U.N. Human Rights Council in its final report issued in mid-September found signs of genocidal intent in the 2017 military campaign and warned that the roughly 600,000 Rohingya currently living in Myanmar face a “serious risk of genocide.”

Hau Do Suan derided the FFM’s findings in October, saying they were based on “one-sided views, unsubstantiated allegations, misleading information based on secondary sources, and narratives.”

He added that Myanmar takes the issue of accountability seriously and has repeatedly stated that the perpetrators of human right violations “causing the large outflow of displaced persons to Bangladesh must be held accountable.”

The move by Gambia follows a notice filed in June by Fatou Bensouda, chief prosecutor of The Hague-based International Criminal Court (ICC), which tries individuals accused of committing crimes against humanity, about her intention to seek authorization to open a formal investigation into alleged crimes against humanity committed against Rohingya Muslims from Myanmar.

Bensouda said she wanted to investigate crimes of deportation, inhumane acts, and persecution allegedly committed as Rohingya were driven from Myanmar, which is not a member of the ICC, into Bangladesh, which is a member.

A month after Bensouda filed the notice, ICC prosecutor James Stewart and a court delegation conducted a six-day trip to southeast Bangladesh and the Rohingya refugee camps as part of preparations for the potential investigation.

Written in English by Roseanne Gerin.