I write in memory of a tragic day in history that changed the destiny of the USA and the world. With the assassination of JFK, the path was open for presidential deceit and deception, for abuses of national purpose and moral authority. Say what you will, JFK was our nation’s last hope for principled charismatic leadership capable of inspiring hope and sacrifice for higher purpose. — 22 Nov 2019 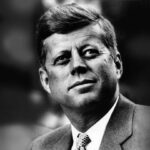 In death, I remain:
Timeless beacon,
Image of truth,
Symbol of hope.

Know this:
From each grain of earthy dust,
I continue to speak,
Silence impossible!

What madness possesses you?
What fury grips your mind?
What passions drives you,
Justified betrayal!

You kill your own,
Oblivious to consequence,
Hardened to suffering,
A grinning demon in morning mirror!

Plausible deniability!
Cover: National Security!
No fear! No constraint.
No limit to menace

Clinton caught by semen splashes,
G. H. W. Bush enamored with elites, oaths, oligarchy, Skull & Bones;
G. W. Bush, “You are with us, or against us.” He lived both!
Obama, transparent promises, lived lies!

I claim no special sanction,
Beyond my mapped death.
Dismiss me if you will,
Flee, if you wish, from hypocrisy.

Know I walked corridors of power,
Know I stood whispered gatherings,
Know I tolerated secrecy;
For this, I suffer even in death!

I am cold in bone and body,
Shriveled from age and decay,
Scattered dust on coffin floor,
Guarded by impervious flame.

Like John’s Brown body,
I smolder in my grave,
Asking when will it end?
We are fodder!

Anticopyright: Editorials and articles originated on TMS may be freely reprinted, disseminated, translated and used as background material, provided an acknowledgement and link to the source, TMS: Remembering JFK: Voices from a Smoldering Grave . . . Memorial Prose Poem, is included. Thank you.