The Yin & Yang of Authentic Being-In-The-World

A Buddhist Discourse with New-Age, Interfaith, and Peace-and-Justice Implications

Too many students of Buddhism forget that the Middle Way is a balance, a rhythm, a pulse.  The meditative silence and stillness of Yin is, yes, the raja yoga – the “royal road” – to enlightenment.  Namely: the “yoking” of a quiet, empty, flexible, diaphanous ego to the evolutionary joy and creative eros of the Dharma (called in other traditions Tao, God, or Spirit).

In this Yinful shikantaza or shamatha – just sitting, just breathing, just being – it is appropriate to release (to let go of) past, present, and future.

And the same spirit of releasement also applies to other forms of Yinful being-in-the-world, such as knitting, painting, composing, stretching, jogging, tai chi, cooking, mowing the lawn, or walking by a beach or through a forest, or tending one’s garden with tender loving care, or just sitting on a hill or by a stream or by a pond or on a park bench.

But too many students of Buddhism take such releasement and forgetting of past, present and future as a comprehensive formula for the journey to awakening.  Lost in what Zen calls the “ghost cave of samadhi” – attachment to Yin as the be-all and end-all – they become like walking zombies, trying to imitate what the Buddhist tradition calls “a stone Buddha.”

Siddhartha Gautama Shakyamuni Buddha did not achieve enlightenment beneath the bodhi tree and then remain in blissful detachment from the world.  He spent the next forty-five years of his life founding and consolidating the revolutionary institution of the sangha (the community of Buddhist practitioners), and teaching all who cared to listen The Eight-fold Path to being-in-the-world-with-others in such a way as to promote both individual and collective equanimity, sanity, opportunity, creativity, beauty, and peace, in harmony with Nature

Buddha understood that what some call The Eternal Now is fruit of the past and womb of the future.

As pilgrims on the path to Awakening – what Plato and Chogyam Trungpa call “recollecting the sanity we were born with” – we are thus obliged to be mindful of the importance of past, present, and future.

Those who don’t learn from the past are condemned to repeat it, until karma teaches them appropriate change in thinking and behavior.

Those who don’t employ their critical thinking skills to comprehend the problems of the present, both individual and collective, are prisoners of ignorance and delusion.

Those who do not work for peace and justice, love and compassion, social Awakening and the well-being of all, are part of the problem.

The “inward turn” (Socratic and Buddhist) toward the silence and stillness of Yin (“your own true nature” and “natural mind”) must naturally rebound back into a courageous and compassionate Yangful engagement with the world – the present as result of the past and springboard of hope for the future – or else one utterly fails to understand “one’s own true nature” as an inter-being link in the collective destiny of Gaia-dependent humanity.

And let us not forget that Jesus chased the money-changers out of the temple, most likely with a bull-whip. 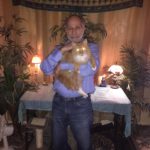 Anticopyright: Editorials and articles originated on TMS may be freely reprinted, disseminated, translated and used as background material, provided an acknowledgement and link to the source, TMS: The Yin & Yang of Authentic Being-In-The-World, is included. Thank you.