4 Nov 2019 – United Nations Special Rapporteur on Torture Nils Melzer has issued a chilling warning: If WikiLeaks publisher Julian Assange is not urgently released from prison and provided the medical care he requires, he may die behind bars in Britain.

In accompanying comments to the Associated Free Press, Melzer said that his statement was based on “new medically relevant information.” “Mr Assange’s health has entered a downward spiral of progressively severe anxiety, stress and helplessness typical for persons exposed to prolonged isolation and constant arbitrariness,” the UN official said.

Melzer, an internationally recognised legal expert on torture and its symptoms, explained: “While the precise evolution is difficult to predict with certainty, this pattern of symptoms can quickly develop into a life-threatening situation involving cardiovascular breakdown or nervous collapse.” 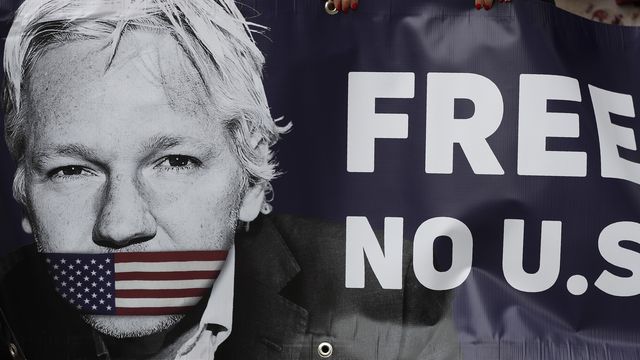 Melzer’s statements confirm that the British government, acting on behalf of the US administration of President Donald Trump, is seeking nothing less than Assange’s psychological and physical destruction.

The attempt to extradite Assange to the US and imprison him for life is one prong of this lawless campaign. His indefinite detention in virtual solitary confinement and without access to adequate medical care in Belmarsh Prison—dubbed Britain’s Guantanamo Bay—is another.

The aim of both is to silence Assange and WikiLeaks and exact the greatest revenge for their exposures of historic war crimes, global diplomatic conspiracies around the world, and mass surveillance operations.

Since Assange was illegally expelled from Ecuador’s London embassy and arrested by the British police on April 11, he has been subjected to one legal travesty after another.

Despite being convicted only of a bogus bail charge, Assange was immediately imprisoned in the maximum-security Belmarsh Prison. In May, Melzer, accompanied by two medical professionals, visited him. They assessed that Assange showed “all the symptoms typical for prolonged exposure to psychological torture.”

By that point, Assange had already been subjected to a nine-year US-led vendetta, aided by what Melzer termed “public mobbing” spearheaded by the corporate media. Assange had been in the Ecuadorian embassy for seven years, where he was deprived of access to sunlight and treatment in a hospital, as a result of the threats of the British authorities to arrest him if he left the small building.

In the final 18 months of his stay, the embassy was transformed by the Ecuadorian authorities from a place of political refuge into a virtual CIA prison. Assange was relentlessly spied on by the US intelligence agencies, while he was denied the right to visitors and to communicate with the outside world.

After he visited Assange in May, Melzer sent an official letter to the British authorities, demanding that they take “immediate measures for the protection of his health and dignity.”

On Friday, Melzer bluntly declared that his warnings had been ignored. He stated: “What we have seen from the UK Government is outright contempt for Mr. Assange’s rights and integrity. Despite the medical urgency of my appeal, and the seriousness of the alleged violations, the UK has not undertaken any measures of investigation, prevention and redress required under international law.”

Britain, Melzer said, had not only violated the international convention against torture. It had also denied Assange’s fundamental legal rights, by preventing him from accessing legal documents and other means of preparing his defence.

Despite the fact that the custodial sentence for the bail charges ended on September 22, Melzer wrote that Assange “continues to be detained under oppressive conditions of isolation and surveillance, not justified by his detention status” and subjected to “blatant and sustained arbitrariness” by the British state and its judiciary.

His statement followed Assange’s last British court appearance on October 21, which can only be described as a show-trial.

The presiding Judge Vanessa Baraitser dismissed out of hand legal arguments that should have resulted in the immediate dismissal of the extradition case, including a ban on extraditions from Britain to the US for political offences and the CIA’s illegal spying on Assange. She was contemptuous of Assange and his lawyers, and indifferent to the dramatic deterioration of his health, which left him struggling to even state his name and date of birth.

Baraitser could only exhibit such brazen bias, because she knew that she was carrying out the policy of the entire British political establishment. All of the official parties are acting as the faithful servants of the military and the intelligence agencies, in Britain and the US, by suppressing any opposition to the slow-motion assassination of Assange.

On April 11, British Labour Party leader Jeremy Corbyn, who occasionally claims to be a socialist, declared: “The extradition of Julian Assange to the US for exposing evidence of atrocities in Iraq and Afghanistan should be opposed by the British government.”

Assange’s name has scarcely passed Corbyn’s lips since. Instead, he has acceded to a political witch-hunt by his own party’s right wing, targeting those few prominent members who have voiced opposition to imperialist war and support for Assange.

Corbyn, who is currently campaigning in a general election, has not seen fit to respond to the warnings of a UN official that the world’s most prominent journalist is being tortured to death in the heart of Britain. Nor should it be forgotten that London, where Assange is held as a political prisoner, is controlled by Labour mayor Sadiq Khan, who has likewise remained silent.

The most perfidious role is played by the pseudo-left organisations—from the Democratic Socialists of America, to Socialist Alliance in Australia and the Socialist Workers Party in Britain. If one judged the world based only on their wretched publications, one would not even know that Assange exists.

Having abandoned the WikiLeaks founder on the basis of support for the CIA attempt to frame him on bogus sexual misconduct allegations in Sweden, and their open alignment with imperialist war, these organisations simply no longer mention Assange.

As for the Australian government and the opposition Labor Party, they have made no response to Melzer’s warnings that an Australian citizen and journalist faces death as a result of his illegal detention by Britain. All of the Australian parliamentary parties have backed the campaign against Assange, in line with their support for US imperialism.

The responses are yet another demonstration of the fact that the working class is the only constituency for the defence of democratic rights, and class war prisoners such as Assange and Chelsea Manning—the courageous whistle-blower who is imprisoned in the US for refusing to give perjured testimony against the WikiLeaks founder.

As millions of workers enter into social and political struggles against austerity, inequality and war, the persecution of Assange is meant to send a warning: this is what happens if you take a stand against the powers that be and oppose war crimes and government illegality.

This is a precedent that must be defeated. Everywhere, workers must be apprised of Assange’s plight and of the inextricable relationship between the fight for their own social and democratic rights and the struggle for his immediate and unconditional freedom.

This requires an international campaign aimed at mobilising the immense power of the working class, revealed in recent months in the mass struggles in Chile, Ecuador, Lebanon and around the world.

The World Socialist Web Site and the Socialist Equality Parties internationally are conducting intensive campaigns in working-class areas, at university campuses and in factories, for the defence of Assange and Manning. This includes major public meetings in Australia and New Zealand in the coming weeks. Contact us today to join this crucial fight.