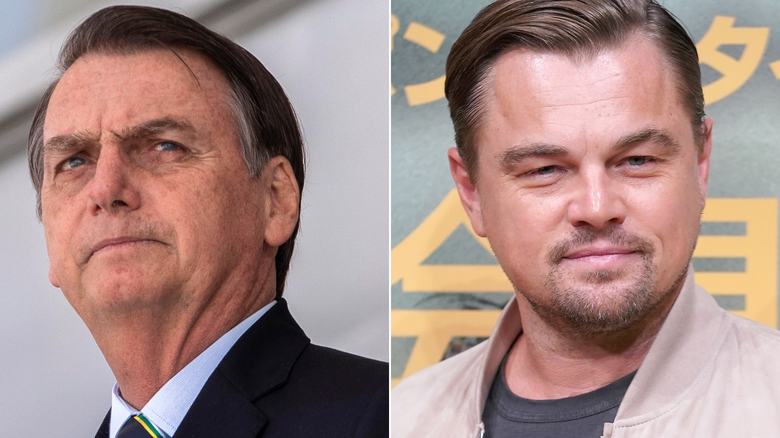 1 Dec 2019 – The unprecedented fires that burned through the Amazon in August had several culprits: farmers clearing land for cattle ranching, anti-indigenous activists attempting to drive away tribes who live in the rainforest, and lax enforcement of environmental protections by Brazil’s far-right government. But now, President Jair Bolsonaro is blaming another unlikely culprit: American actor and environmentalist Leonardo DiCaprio.

In what activists say is an attempt to direct attention away from his government’s actions, Bolsonaro has repeatedly accused nonprofit organizations of purposefully setting fires in the Amazon to solicit donations from wealthy donors such as DiCaprio—an assertion that he offered no evidence to back up.

Earlier this week, police arrested four members of the Alter do Chão fire brigade, whom they accused of setting some of the fires that ravaged parts of the northern Brazilian state of Pará in September. Critics said the move was politically motivated, and the BBC reports that a judge refused to let the men out on bail.

This week, Bolsonaro appeared to lend credence to rumors circulating on social media that the environmental NGO World Wildlife Fund (WWF) bought photos from the Alter do Chão brigade to solicit donations from people like DiCaprio—an accusation that both DiCaprio and the WWF have denied.

“The NGO people, what did they do? What’s easier? Set fire to the bush,” Bolsonaro said in a Facebook Live video. “Take photo, film, send it to an NGO, the NGO spreads it out, does a campaign against Brazil, gets in touch with Leonardo DiCaprio and Leonardo DiCaprio donates $500,000 to this NGO.”

The Leonardo DiCaprio Foundation funds organizations and projects that “protect vulnerable wildlife from extinction, while restoring balance to threatened ecosystems and communities.” The Amazon forest is often called “the Earth’s lungs” for its ability to absorb the world’s greenhouse gases, and the DiCaprio Foundation said this summer that it would match donations to the Amazon Frontlines, an activist group that campaigns for indigenous people living in the Amazon, in 2019. But, like many other high-profile individuals, DiCaprio also shared outdated or misleading photos of the fires, fueling conspiracy theories on social media.

In a statement on Instagram, DiCaprio fought back against Bolsonaro’s accusations, saying he remains “committed to supporting the Brazilian indigenous communities, local governments, scientists, educators and general public who are working tirelessly to secure the Amazon for the future of all Brazilians.”

At this time of crisis for the Amazon, I support the people of Brazil working to save their natural and cultural heritage. They are an amazing, moving and humbling example of the commitment and passion needed to save the environment. The future of these irreplaceable ecosystems is at stake and I am proud to stand with the groups protecting them. While worthy of support, we did not fund the organizations targeted. I remain committed to supporting the Brazilian indigenous communities, local governments, scientists, educators and general public who are working tirelessly to secure the Amazon for the future of all Brazilians.