Celebrating the Legacies of Leo Tolstoy and Mahatma Gandhi 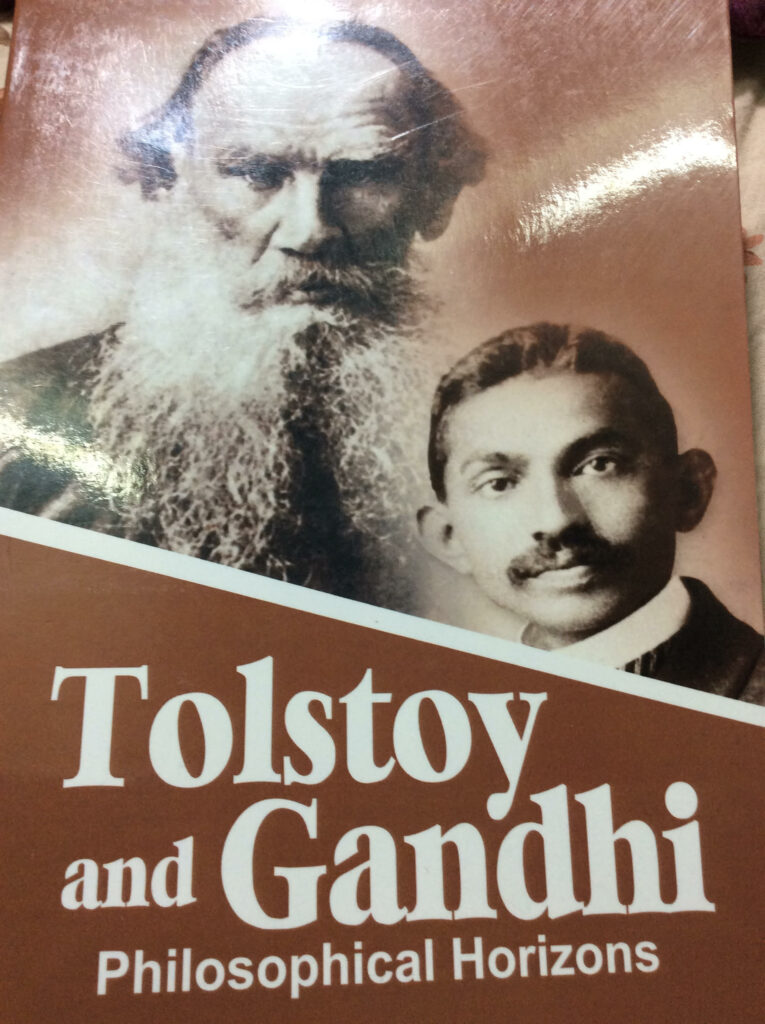 Many countries and institutions in the world especially in India have celebrated Mahatma Gandhi’s 150th anniversary on 2 Oct 2019. Some more celebrations on his core beliefs and practices are still being organised in India.

One of such celebrations was in the Gandhi Bhawan of Delhi University, named Tolstoy and Gandhi – Philosophical Horizons, on 21-22 Nov 2019.

Leo Tolstoy is well known all over the world as a Russian novelist and   philosopher. Some of his best known novels are War and Peace (1869), Anna Karenina (1877), The Death of Ivan Illich (1886), among others.

Although Gandhi  (1869-1948) never met Tolstoy (1828-1910), he was highly inspired by the latter’s values and beliefs— nonviolence, vegetarianism, simple living, truth, and love — love for mankind and for all forms of life.

Although Tolstoy was born a Christian and lived as one, he criticised the teachings and practices of the Russian Orthodox Church, especially its focus on miracles. He was excommunicated by the Church in 1901. He believed in the teachings of Christ that were based on the Sermon on the Mount— a collection of Christ’s sayings on how to live a life of peace, harmony and love for the world’s poor and helpless peoples.

Expanding on his ideals of Christianity, Tolstoy wrote The Kingdom of God Is within You, which was banned in Russia and first published in Germany in 1894. Its main idea according to the author was:

“The sole meaning of life is to serve humanity by contributing to the establishment of Kingdom of God by the recognition of the truth of every man.”

Turning into a vegetarian he had said,

“A man can live and be healthy without killing animals for food; if he eats meat, he participates in taking animal life merely for the sake of his appetite. And to act so is immoral.”

While Gandhi was in South Africa, 1893-1914, he met with many scholars and Christian missionaries in order to understand the basic principles of Christianity. He also read many Hindu epics — the Upanishads, Vedas, Mahabharata, Bhagwad Gita and other texts dealing with faith, culture, justice, harmony, peace. During that period he also recognised the British rulers’ ill treatment of local populations and Indians who were working as low paid coolies. They faced injustices–racial and social–at the hands of the British.

Gandhi himself faced racial brutality, as when he was thrown out of a train in Pietermaritzburg, South Africa because he was travelling in a first-class coach reserved for whites only, despite having a ticket for it. He faced other incidents of racial and inhuman behaviour as well.

As a result of these incidents and his efforts to understand how to deal with injustice, violence, discrimination, Gandhi developed the concept of Peaceful Resistance, in other words, protesting against any form of injustice peacefully and without violence. These experiences led Gandhi to use nonviolent means to press for equality and justice at the hands of the rulers. This also led him to evolve the means of Satyagraha that he frequently used in India upon his return in 1914.

During these tumultuous years, Gandhi heard about Leo Tolstoy and also read some of his writings that were available in S. Africa. He wrote to Tolstoy about his concerns and received sympathetic and encouraging replies as they continued writing to each other. In his last letter to Gandhi, written two months before his death in 1910, Tolstoy wrote:

‘Love, that is the striving towards universal brotherhood and resulting actions, is the supreme and unique law of human life.’

When Gandhi was gifted a large area of land in Johannesburg, Transvaal, S. Africa, he named the colony after Leo Tolstoy and called it Tolstoy Farm. The Farm was open to all people of the country and was used to practice religious and racial brotherhood and experiment with Satyagraha.

The Farm had the same ambience and feeling of peace and simplicity of the Phoenix Ashram in Durban, which Gandhi had acquired in 1904 and where he lived modestly for some years with his wife Kasturba Gandhi.

As indicated, Gandhi was greatly inspired by Tolstoy for his humanity, nonviolence, vegetarianism and other features, despite never having met him. His words reinforce his admiration:

‘Tolstoy was the greatest apostle of nonviolence that the present age has produced.’

Today we see violence, terrorism, injustice, cruelty, brutality in many parts of the world. As we celebrate the 190th anniversary of Leo Tolstoy and the 150th of Mahatma Gandhi, we are in fact reinforcing the values of truth, nonviolence, simplicity, peace, justice and harmony as promoted by these great personalities. May their beliefs and actions strengthen our resolve to fight the evils in our societies!

Anticopyright: Editorials and articles originated on TMS may be freely reprinted, disseminated, translated and used as background material, provided an acknowledgement and link to the source, TMS: Gandhi and Tolstoy, is included. Thank you.

4 Responses to “Gandhi and Tolstoy”