Past meltdowns occurred with temperatures only slightly higher than today’s, suggesting the world is overestimating the ice sheet’s stability, scientists say. 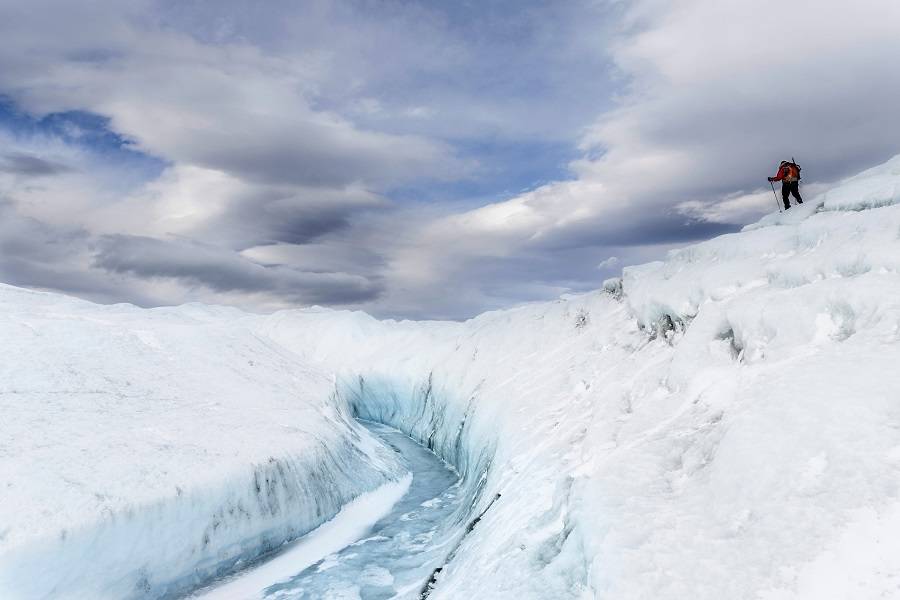 “Some parts of the climate system respond slowly, so that the fact that we don’t yet see major consequences doesn’t mean that major consequences are not in the pipeline and may be inevitable,” an author of the new paper said.
Credit: Martin Zwick/REDA&CO/Universal Images Group via Getty

23 Dec 2019 – There’s new evidence that, in past geologic eras, much of Greenland’s ice melted when Earth’s temperatures were only slightly warmer than today’s, and that human-caused global warming will push the ice sheet past that tipping point in the next few decades.

Exactly how much of the ice melts, and how fast, depends in large part on how long temperatures stay above that threshold, scientists write in a study published Monday in the Proceedings of the National Academy of Sciences.

The findings are a warning that we are probably overestimating the stability of the Greenland Ice Sheet, said University of Bergen paleoclimatologist Ulysses S. Ninnemann, a co-author of the study.

“Our best estimate suggests that modest warming was able to dramatically reduce the parts of the Greenland Ice Sheet that are hard to melt away,” Ninnemann said. Areas of the ice sheet thought to be relatively stable, including the high-elevation southern and southeastern sections, could melt “due to only a small increase in temperatures relative to today,” he said.

The researchers analyzed the chemical fingerprints of fossilized shells from the ocean floor off Greenland dating back about 400,000 years to establish a detailed record of temperature changes in the region. They matched that data against records of seafloor sediment layers, which include different types of materials washed in from different parts of Greenland’s surface, showing when those parts of Greenland were ice-free.

The results show that a lot of Greenland’s ice can melt with less warming than previously thought if the warming is sustained for a long time. That “helps to explain why the modestly warm, but quite as long, interglacial around 400,000 years ago lost so much ice,” Ninnemann said.

“What is interesting is that, despite periods of cooling in between, it looks like the ice still went away, which suggests that a threshold might have been crossed—after enough melting had occurred—at which point the loss of large amounts of ice became inevitable.”

Greenland’s ice loss continued even when temperatures started to cool again because the melting changes the geometry of the ice sheet, in part by exposing more bare ice along the steep edges. That ice is darker and absorbs more heat, leading to further melting in a classic global warming feedback loop.

“Both magnitude and duration of past warmth were important influences on the ice sheet,” the paper concludes. “Notably, the critical temperature threshold for past Greenland Ice Sheet decay will likely be surpassed this century. The duration for which this threshold is exceeded will determine Greenland’s fate.”

Up until now, the critical thresholds for a Greenland meltdown have mostly been estimated by using climate models, said Petra Langebroek, a senior researcher at the NORCE & Bjerknes Centre for Climate Research in Bergen, Norway, who was not part of the study.

“It is exciting that this new study explores this by using reconstructions of temperatures and ice retreat. Today we know surprisingly little about the temperature thresholds under which the Greenland Ice Sheet will collapse or melt rapidly. So basically, we do not know if we are far away from such a threshold, close by, or already have crossed it.”

The Greenland Ice Sheet holds the equivalent of about 23 feet of sea level rise. Estimating the speed of the meltdown is important for coastal communities already struggling to adapt to rising seas.

Previous research has suggested that the speed of that meltdown would depend on how warm it gets: with warming of about 8 degrees Celsius, big parts of the ice sheet could be gone within 2,000 years; 6 degrees of warming would take longer to melt the ice sheet. The new study offers additional clues, particularly about the role that the duration of warmer temperatures can play.

“These paleo time scales might sound like an eternity. However, seven meters [23 feet] in 2,000 years, is on average 0.4 inches per decade, which is about three times as much as the Greenland Ice Sheet currently contributes to sea level,” Langebroek said. 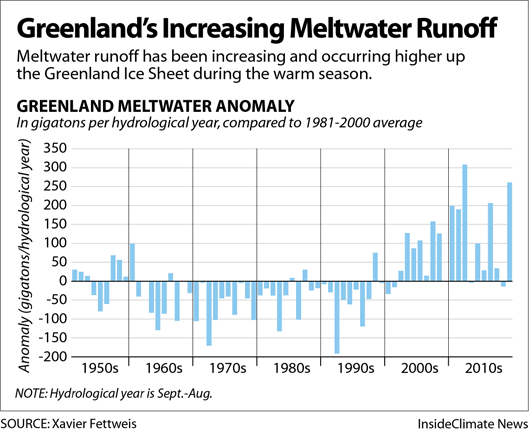 Ninnemann said he hopes the new study will help people understand that Earth’s climate system has certain cliffs which, once stepped off of, are hard to climb back up.

“The new reconstructions of ancient climates show that we are very close to one of those cliffs in terms of how much more warming we can have before the large ice sheets on Greenland are unsustainable,” he said.

“Some parts of the climate system respond slowly so that the fact that we don’t yet see major consequences doesn’t mean that major consequences are not in the pipeline and may be inevitable,” he said. The study shows that the length of the warming period is critical, if we can limit the time the global temperature stays above the threshold for melting, there’s a chance the ice sheet could stabilize, he said.

Sea Level Rise Is Only Part of the Problem

Sea level rise is not the only reason to be concerned about melting on the Greenland Ice Sheet. There is increasing evidence that the growing discharge of cold, fresh water is also disrupting an ocean current that helps balance the global climate by circulating deep, cold water from polar regions toward the equator.

Contrasts in temperature and salinity drive what’s known as the thermohaline circulation, or the great ocean conveyor belt. Near the poles, the colder surface water gets saltier due to evaporation and sinks, causing the water to flow horizontally until it can rises back up toward the surface. 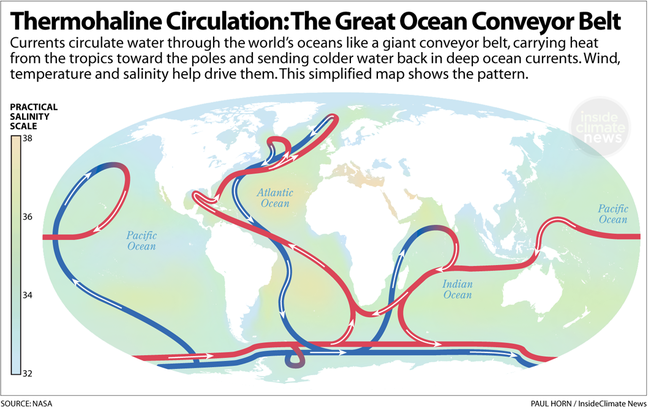 A recent study explored how the melting ice sheet may be contributing to a slowdown of the entire circulation system. If it were to slow significantly or collapse, research suggests it would lead to widespread cooling throughout the Northern Hemisphere and large changes in precipitation and strengthening storms.

Ninnemann, who also studies the thermohaline circulation, said fast changes are possible during warm periods, but that the consequences are not yet fully understood.

“The geologic record holds the answers to how climate operated in a warmer world,” he said.