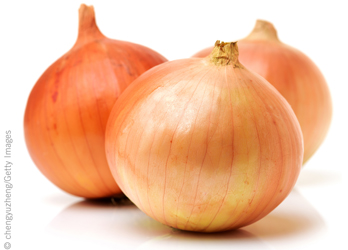 The simple unpretentious vegetable called onion has acquired headlines in India. Why, because it has become so expensive that some people are worried that soon it will be easier to buy gold than a kg of onions.

Onions bring tears to the eyes of most people because of their pungent taste. But today they are bringing tears as a result of their escalating price.

This simple item is part of the ingredients of the meals — both vegetarian and non vegetarian that are cooked in India and in many South Asian countries. The only people who do not use it in their meals belong to the faith of Jainism. They do not eat any vegetable that sprouts below the soil — potato, carrot and of course onion. When asked then what do you eat, they smile and answer “there are many vegetables that we can eat — beans, cauliflower, tomato, etc.”

Not only are onions staple ingredient at most homes, they are essential items in roadside dhabas (eateries) on several highways of north India. They serve the truck drivers who stop there for some rest and food. Even other people who drive along these roads are tempted to eat in these dhabas for their taste, aroma and low prices.

Onions are essential items in salads as well as in paranthas that attract customers to these eateries. But currently these dhabas are feeling the pinch due to the soaring prices of this humble bulb called pyaz in local language. They are facing difficulties in serving pyaz free of cost so they are charging a small price for the salads that were earlier served free of cost along with the other items.

Historians have been able to determine that this simple onion bulb has been cultivated for at least five thousand years in the areas that comprise modern day north western parts of India, Pakistan, Afghanistan and parts of China etc. A scholar Frederick Simmons in a book entitled Plants of Life, Plants of Death wrote that people were forbidden to eat onions during some sacred rituals since it was felt that their pungent smell introduced some baser sentiments in people. It has also been noted by some historians that in some parts of India, widows were prohibited from eating this pungent bulb.

Surprisingly, Mahatma Gandhi has also made reference to this onion crop  in some of his writings. In an article that appeared recently in an Indian newspaper, K Dasgupta has written that Gandhi felt that this humble bulb was an essential ingredient in the food of ordinary people. Gandhi also carried out a Satyagraha in favour of farmers who cultivated onions in his home state Gujarat. This only demonstrates the importance of onions despite or perhaps because of their pungency.

Thus the rocketing price of onions is causing distress not only among ordinary households but also is leading to severe problems among the economists of the Indian government.

A poem on the high prices of onions written originally in Hindi (by me) goes like this:

Oh you naughty onion
Why are you jumping so high
Why compare yourself with gold
Come down from your high perch
And shake hands with your friends of old
Why have you become so cold
Towards your former admirers
Don’t leave them in this lurch.

Anticopyright: Editorials and articles originated on TMS may be freely reprinted, disseminated, translated and used as background material, provided an acknowledgement and link to the source, TMS: Interesting Aspects of Onions, is included. Thank you.