Cambridge Analytica and the End of Elections

18 Jan 2020 – The latest Cambridge Analytica leaks show just how compromised voting – one of the pillars of democracy – has become. 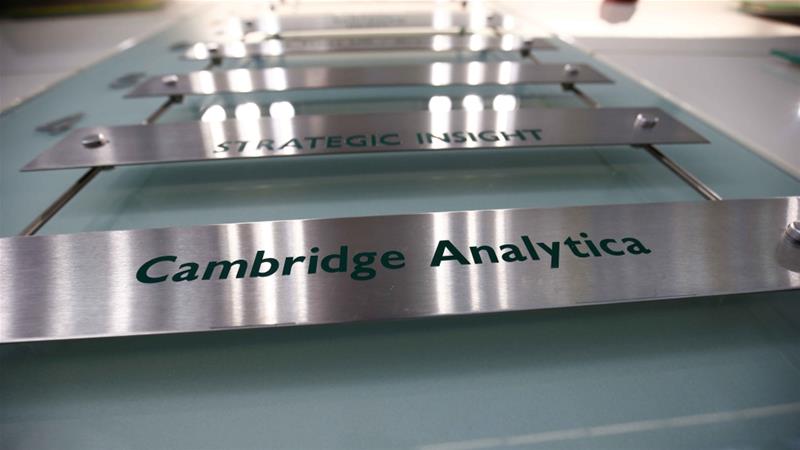 A new trove of documents from Cambridge Analytica and its parent company SCL Group were released on January 1.
[File: Reuters/Henry Nicholls]

In the early hours of January 1, 2020, a Twitter handle, @hindsightfiles, allegedly run by Brittany Kaiser, a former employee of Cambridge Analytica,  shared confidential documentation regarding the involvement of SCL Group, a now-defunct British firm, in numerous elections around the world.

The significance of these documents seems to be lost at a time when “World War III” was a top trending topic on social media. But parsing through the documents and pairing them with broader contextual developments, it is clear that foreign interference in politics, and especially elections, are entering a new level.

Kaiser worked on many of the projects but eventually decided to blow the whistle on her former employer. Some of the information about Kenya contained in the data leaks was already in the public domain, particularly on the firm’s now-deleted website.

For example, the papers allege that in 2012 the firm undertook an unprecedented, large and wide-ranging political perception survey of 47,000 households across the country. Then, they built a political party and a communications strategy around it.

For the 2017 election, Cambridge Analytica proposed a similar plan of action that paired these analogue strategies with digital strategies to help Uhuru Kenyatta win the election under his new party, Jubilee. Kenyatta would eventually win that election as well, but revelations about the firm’s practices would only further undermine a suspect process.

For the last 30 years, proponents of good governance as a gateway to economic development and other goods have been hedging their bets on free and fair elections as the starting point. But with companies like Cambridge Analytica getting involved and tipping the scales towards wealthy political parties in secretive and convoluted ways, it is clear that fair elections are increasingly elusive, and democracy is at risk.

With regards to Kenya, the leak confirms that a somewhat unqualified British firm was able to penetrate the highest levels of political office in Kenya fairly easily and secure massive payouts by offering pretty basic social science research.

Notably, the Kenyan president is the highest-profile individual named, his identity used to draw other people in, for instance, solicitation emails to teams around people like former Sierra Leonean President Ernest Koroma.

There are also telltale signs of how little they value African clients based on these amateurish solicitation emails. For example, in an email reaching out to Koroma’s cousin John Sisay, SCL CEO Mark Turnbull clearly added to a forwarded email without changing the colour of the text – the final email that goes out is in two colours.

Significantly, the leaked documents confirm what the firm and its subsidiary Cambridge Analytica have roundly denied – that the firm was in fact actively involved in the Brexit campaign in the United Kingdom. In an email from September 23, 2016, Turnbull asserts: “Our recent track record includes advising the Brexit campaign which saw the UK vote to leave the EU …”

Whether or not this was true, considering how emphatically they have denied their involvement in the campaign, it points to a culture of deceit within the firm and raises the question: what else are they lying about? If this is the material contained in official documents, what is contained in unofficial information? It underscores that the ethical environment around elections is far more compromised than the average voter realises.

The data leaks also show that the Jubilee administration has, since 2012, spent large amounts of money on this one company. Between December 2015 and April 2016, the party paid SCL $1.25m of a $1.3m contract. The first version of the 2017 election proposal contains a budget of $3.9m, but press reports put the final figure spent on the firm at approximately $6m.

Elections around the world are big business, and increasingly becoming a game for the rich, eroding the idea that parties are led by the best people, not just the wealthiest. More importantly, elections can no longer be held up as absolute protection against politicians displacing important social priorities in favour of personal political gains.

Moreover, in his book about Cambridge Analytica’s work, whistle-blower Christopher Wylie states that an unnamed African country moved similar money out of its health ministry in order to pay for the firm’s services.

With a budget of $500m for 19 million voters, at just more than $25 a head, the Kenyan election in 2017 was already by some estimates the most expensive election in the word per voter. Yet the value of these elaborate processes must be questioned if they only lead to more political and social uncertainty, as they did in Kenya.

The part of the Cambridge Analytica’s work that has come under the highest levels of public scrutiny is its digital strategy, where the firm’s secretive psychometrics approach relies on digital techniques to enhance survey data and produce political profiles of voters to help with targeted messaging.

In one draft of the Kenya pitch documents, under the digital strategy subheading, the author left seven Xs “XXXXXXX” as if this opaque element would be tagged onto the election strategy when the person drafting the strategy understood it better. Wylie and other whistle-blowers suggest that these digital strategies are a spectrum of shadowy digital practices and that in other countries the company certainly crossed the line.

On Trinidad and Tobago, for example, Wylie writes that the government made terabytes of critical personal digital information – locations, IP addresses and deanonymised census data – available to the firm to help craft the governing party’s political campaign. Wylie points out that based on the information given to the firm by the government, he was, from his computer in London, able to log into a private computer on the island and see what an individual was watching or looking up.

Nothing contained in the Kenya documents appears illegal, although much of it is unethical particularly the broad-ranging data collection by a foreign entity with little apparent oversight from the Kenyan authorities. Kenya may have been shielded from some of these extremes by the sheer size of the population that is not online, with 10 million active Facebook users for a country with a population of 47 million. But as I point out in my book, Digital Democracy, Analogue Politics, that number is rising dramatically year on year.

Looking at these documents in isolation, it is tempting to shrug them off as another group of British quacks using delusions of white superiority in the postcolony to make a quick buck. Certainly, between the condescending way in which these white actors speak about people of colour behind their backs and the clearly inflated sense of self-importance betrayed in these documents, there is an element of what Frantz Fanon calls in his book Black Skin, White Masks “collapse of the ego” – where “the black man stops behaving like an actional person … since only the Other can enhance his status and give him self-esteem”.

But when read against the entirety of Kenya’s political landscape, the immediate threats to the future of elections all over the world are starker. The governing party in Kenya exerts an outsized influence on the media and other key institutions, like the electoral commission. Combined with these shadowy practices, the entire electoral edifice looks less stable. The point is how these actions interacted with the existing dynamics in the political space to produce an outcome that has ultimately compromised the integrity of democracy in Kenya.

Certainly, it is nearly impossible to overcome the unfair and insurmountable advantage that a survey of 47,000 households provides to a political party that can also compel every major media outlet to repeat their messaging across the country, for example. It should be read alongside the party’s ability to influence the electoral commission, as when the capital’s gubernatorial candidate was able to get a ticket to run for office even though he may have escaped from prison, which would disqualify him under the ethics provisions of the constitution.

A foreign company conducting such large and unchecked data collection must also be viewed against the lack of data privacy laws at the time to protect the information collected by this survey, whose protocols, results and outcomes are now the property of a private corporation domiciled outside the country.

You could also point to the damage done to democracy wholesale when obscene amounts of money are siphoned outside the country and diverted from social programmes, and how it hollows out accountability and makes a mockery of any efforts to establish a fair contest.

Facebook’s head of augmented and virtual reality, Alan Bosworth, was quoted as saying that Cambridge Analytica was essentially selling “snake oil” and that they routinely overstated the ability of their psychometrics approach to influence political behaviour. Bosworth may be right about the firm’s ability to move individual political opinion, but the Kenya data underscores that he is missing the overall point.

The “XXXXXXX” psychometrics of Cambridge Analytica’s work does not operate independently of the firm’s other work, nor should the impact of Facebook’s role in this space be seen in isolation. We have entered the era of the corporate elections, where polls are not arguably the pinnacle of democratic participation but are instead another business subject to the vagaries of domestic and international interference, and purely for profit.

The future of elections is at stake, and this is just one part of the emerging picture.

Nanjala Nyabola is a political analyst and the author of the forthcoming book “Digital Democracy, Analogue Politics”.