Gender and Caste Differences — Efforts at Overcoming Them

23 Jan 2020 – Most countries and communities have various types of differences and consequent challenges — social, economic, racial, educational, gender etc. India has all these but there is one that is perhaps unique — caste difference or caste hierarchy. According to the Hindu religion, there are four principal castes — Brahmin, Khshatri,  Vaishya and Shudra. The Brahmin caste is supposed to be at the top of the caste hierarchy and the Shudra caste or the servant class at its bottom. The various castes are further divided into sub castes.

The Indian Constitution and in particular great thinkers and icons such as B R Ambedkar, Mahatma Gandhi, and Jotirao Phule (in the state of Maharashtra) struggled against the rigid caste system and worked for its removal in the country. The Indian constitution provides for special privileges for the lower castes so that economically and socially they can enjoy similar opportunities for their development and the discrimination that they suffer from, should be minimised. In this sense caste system is parallel to the racial discrimination prevalent in USA and many countries of Africa  where stalwarts such as Martin Luther King, Nelson Mandela, Bishop Tutu and others have struggled for long periods against racial discrimination and injustice and faced various hurdles including imprisonment.

I will try to describe some actual efforts that are being made in the Indian society and academia against caste and gender discrimination and resultant inequalities. Some of these efforts are serious, protracted and effective; others such as actions against gender discrimination in Pune occasionally take on a comical appearance but even so have desired positive results.

Higher education in Indian Universities and Colleges provide suitable opportunities for young men and women to come together irrespective of the caste, economic status or their religious backgrounds. It is quite natural for some of them to become not only friends but also have deeper feelings for each other and to think of marrying one another in the future after their studies. It is the time to deliberate on the caste differences of men and women.

A woman belonging to any particular caste eg Brahmin, will usually ponder over the difference of the young man’s caste if he belongs to a lower caste. This is natural because not only are there differences in the social structures of different castes but also  visible differences appear in their rituals, behaviour towards elders living in joint families, eating habits — vegetarian or non veg food etc.

I know of a young scholar of Delhi University who is working on the caste differences of students — both men and women. She meets them, interviews them and does a survey on what young educated persons think of the apparent differences and how they try to overcome them in their actual interactions with each other. Doubtlessly, these small scale academic interactions help reduce caste differences, mutual distrust and ignorance and help to build understanding and empathy for each other. The scholar intends to publish her research work aimed at reducing caste differences.

Another activity conducted by Fergusson College established in 1885 by Deccan Education Society in the city of Pune in the Indian state of Maharashtra has come to light. The activity, very unusual, almost comical, aimed at reducing gender differences and discrimination has been published in some Indian newspapers. The College which is now converted into a University had been a meeting ground for several intellectuals such as Gokhale and Mahatma Gandhi   who had worked hard for Indian independence from British rule. A former Prime Minister of India   P V Narasimha Rao was also its alumnus.

The College celebrated the New Year with what it called Tie and Sari Day by asking women to wear jacket and tie and men students to dress like women by wearing Sari. While women did not have much difficulty in wearing pants and jackets, men were seen to be struggling with the sari of six meters long colourful fabrics.

The effect of this rather comical activity was hilarious and aimed at subverting gender norms in dress. A photograph of three men and a woman student wearing dresses of the opposite sex is presented in this article. Most people will agree that at least two of the men dressed in colourful saris look beautiful and charming.

As mentioned earlier, many communities face several types of differences and discrimination. Efforts at reducing them are encouraged. Attempts at their reduction in academic institutions are showing positive results in addition to often being hilarious and comical. 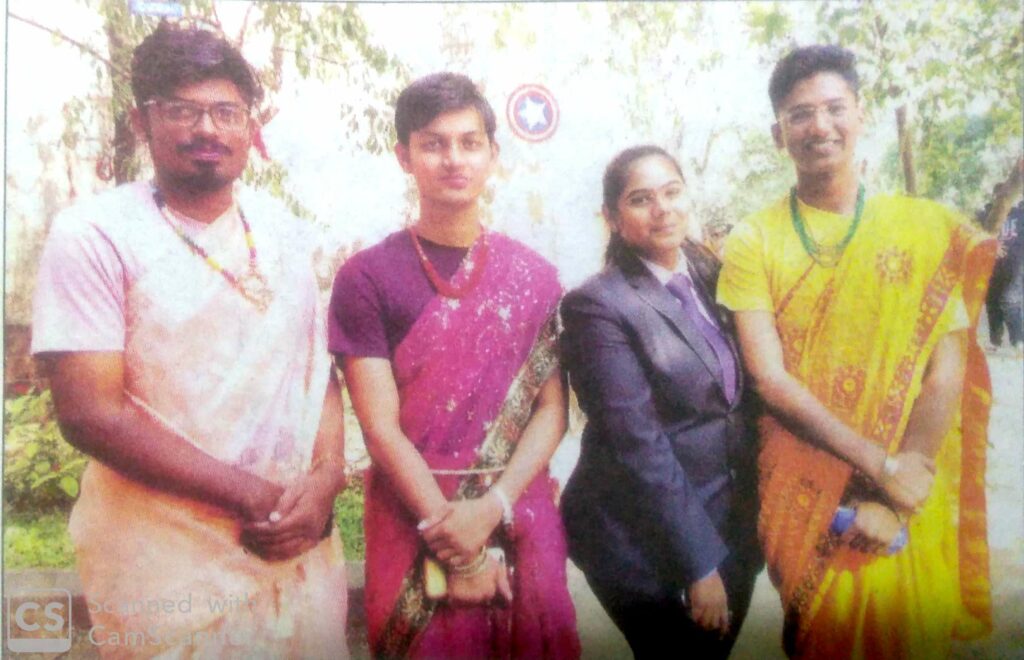 Anticopyright: Editorials and articles originated on TMS may be freely reprinted, disseminated, translated and used as background material, provided an acknowledgement and link to the source, TMS: Gender and Caste Differences — Efforts at Overcoming Them, is included. Thank you.

One Response to “Gender and Caste Differences — Efforts at Overcoming Them”