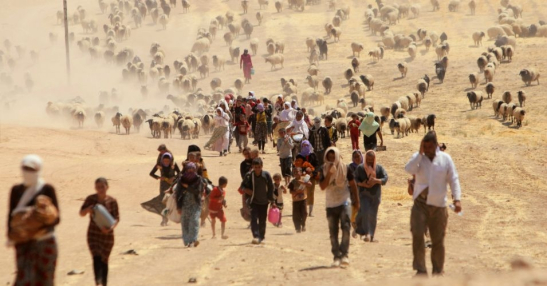 22 Jan 2020 – A landmark ruling by the UN Human Rights Committee states that,

“It is unlawful to return refugees to countries where their lives may be threatened by the impacts of the climate crisis.”

The non-binding ruling is a move that could set a precedent for future protection claims.

The committee’s judgment centered on the case of Ioane Teitiota, a man from the Pacific country Kiribati.

Ioane Teitiota in 2013 claimed the effects of climate change and sea level rise forced him to migrate from the island of Tarawa in the Republic of Kiribati to New Zealand. He arrived in New Zealand in 2007 with his wife and the couple had stayed after their visas expired in 2010.

The island is at risk of becoming the world’s first country to disappear due to rising sea levels caused by global heating. Fresh water has become scarce in the country. Efforts to combat sea level rise have largely been ineffective there.

In 2015, authorities in New Zealand denied Teitiota’s claim of asylum as a “climate refugee” and he was deported back to Kiribati on the basis that his life was not at risk.

He was denied asylum by New Zealand’s Immigration and Protection Tribunal, the Court of Appeal and the Supreme Court.

He then took his case to the Human Rights Committee on the grounds that New Zealand violated his right to life under the International Covenant on Civil and Political Rights by deporting him to Kiribati.

He had argued that his own island of South Tarawa became badly overcrowded because rising sea levels had made other islands belonging to Kiribati uninhabitable, causing land disputes and reduced access to safe drinking water.

The committee upheld the New Zealand courts’ decision, saying the impacts of rising sea levels would not be fully felt for 10-15 years, giving the country time to try, and address them.

However, while the committee did not find in Teitiota’s favor, the judgment said:

“the effects of climate change in receiving states may expose individuals to a violation of their rights … thereby triggering the non-refoulement obligations of sending states.”

This indicates the Human Rights Committee recognizes climate change presents serious threats to the right to life and therefore decision-makers need to take this into account when examining challenges to deportation.

According to the judgment, the court heard that in South Tarawa, 60 sea walls were in place by 2005.

However, storm surges and high spring tides had overcome many of the defenses, caused flooding of residential areas and forcing many people to relocate. Attempts have also been made to diversify crop production, but the health of the population has “generally deteriorated”, as indicated by vitamin A deficiencies, malnutrition, fish poisoning, and other ailments reflecting the situation of food insecurity.

Israeli professor Yuval Shany, the committee’s vice chair, said the experts were “leaving the door open for such cases”.

“We did indicate quite clearly that we can envisage future situations in which individuals will be able to claim a right-to-life violation on the basis of climate change,” he said, urging governments to take this into consideration when reviewing asylum claims.

The UN Human Rights Committee is made up of 18 independent experts who issue opinions and recommendations that carry reputational weight, but they have no power to compel states to follow their rulings.

The world needs to prepare for a surge in refugees with potentially millions of people being driven from their homes by the impact of climate change, the UN High Commissioner for Refugees said on Tuesday.

Speaking to Reuters at the World Economic Forum, Filippo Grandi said a UN ruling this week meant those fleeing as a result of climate change had to be treated by recipient countries as refugees, with broad implications for governments.

“The ruling says if you have an immediate threat to your life due to climate change, due to the climate emergency, and if you cross the border and go to another country, you should not be sent back because you would be at risk of your life, just like in a war or in a situation of persecution,” Grandi said.

“We must be prepared for a large surge of people moving against their will,” he said. “I wouldn’t venture to talk about specific numbers, it’s too speculative, but certainly we’re talking about millions here.”

Potential drivers include wildfires like those seen in Australia, rising sea levels affecting low-lying islands, the destruction of crops and livestock in sub-Saharan Africa and floods worldwide, including in parts of the developed world.

Whereas for most of its 70 years UNHCR, the UN’s refugee agency, has worked to assist those fleeing poorer countries as a result of conflict, climate change is more indiscriminate, meaning richer countries may become a rising source of refugees.

“It is further proof that refugee movements and the broader issue of migration of populations… is a global challenge that cannot be confined to a few countries,” said Grandi.

“It says a state will be in breach of its human rights obligations if it returns someone to a country where – due to the climate crisis – their life is at risk, or in danger of cruel, inhuman or degrading treatment. The message is clear: Pacific Island states do not need to be underwater before triggering human rights obligations to protect the right to life.”

“The Pacific Islands are the canary in the coal mine for climate induced migrants. Low-lying island states such as Kiribati and Tuvalu are only one or two meters above sea level. The people there are exposed to severe climate impacts today, including limited access to habitable land, clean drinking water and subsistence living. Governments must consider this dangerous reality and a heating planet’s imminent threat to Pacific peoples’ lives and livelihoods.”

“Given that the risk of an entire country becoming submerged under water is such an extreme risk, the conditions of life in such a country may become incompatible with the right to life with dignity before the risk is realized,” the experts said.

The experts said countries planning to deport failed asylum claimants should take into account the effects of climate change in the country of origin or risk breaching their obligations to defend the claimants’ right to life.

The UN refugee agency has said it expects more and more people to be displaced by environmental factors in the coming years but the concept of “climate refugees” currently does not exist under international law.

The official definition of a refugee is someone who has crossed an international border “owing to well-founded fear of being persecuted for reasons of race, religion, nationality, membership of a particular social group or political opinion”.

Last year the Supreme Court in the Netherlands ruled that the country should cut greenhouse gas emissions in order to protect Dutch people’s “well being and living circumstances.” A similar case is currently being brought in Germany.