Robotics and Artbeings — Fact or Fiction

9 Jan 2020 – One has heard of Robots that can perform many tasks which humans can, and sometimes even better. They have flexibility in performing certain applications and are good at doing repetitive tasks. They are useful in manufacturing processes such as in wrapping up soap bars coming out in assembly lines in some factories or filling up bottles with drinks or medicines as required.

They also have the advantage that they do not get tired and do not need vacations or holidays that human beings require. Robots can also control crowds in busy thoroughfares in some cities. Robots are also able to drive trains or trams in some western cities. But robots are expensive to build and to operate. If they breakdown while on the job, this can result in manufacturing delays or cause chaos on busy streets.

A disadvantage is that these Robots cannot respond to situations of fire or some other emergency. Another charge made against introduction of robots in newer areas is that they displace human labour which is detrimental when adequate numbers of jobs are not available for human beings. This criticism is met by saying that some tasks require precision and repetition that humans find difficult to maintain over long periods of time.

Now there are reports of building artificial men and women — not robots, but human beings look-alikes, in Las Vegas, USA. They look like human men and women and are similarly dressed and can speak some foreign languages including Hindi in addition to English.  What was the basic idea of inventing such artbeings (artificial human beings) has not been made clear. Perhaps they will obey the commands of their masters as used to happen with slaves in some powerful countries.

Artbeings will probably be deployed as mannequins to advertise some products — clothes, shoes or handbags. There are such advertising props already in big departmental stores or malls. But the advantage of these artbeings will obviously be that they will welcome customers by speaking in the local languages. This is similar to the progress made by cinema — earlier there were silent films, but when sound was introduced, a new and popular dimension was added to cinema.

I can think of another application of these creatures. Many people, especially those who feel lonely, have pets — dogs, cats, tortoises or whatever, to provide them company. These creatures would play the role of ideal children for couples who do not have kids of their own or who live elsewhere. People can cuddle them and speak to them and get suitable loving replies from these artbeings.  Loneliness would be a thing of the past for such people. How wonderful!

But moral and legal questions would certainly arise. Could these artbeings commit robberies or shootings like real human beings? If they did, who would be blamed — these creatures or their owners? Could another person (not the genuine owner) send suitable electronic signals to force these creatures to commit illegal, criminal acts? Could they be deployed to urge voters to vote for certain candidates and not others?

Could these creatures be able to reproduce — to produce others like themselves and create chaos on our Planet?

One assurance though: since they can speak and understand Hindi, the government of India would probably not allow the import of these creatures into India.

Well as they say — ‘It is early days’. Let us wait for some time to know what reality has in store for our complex world. 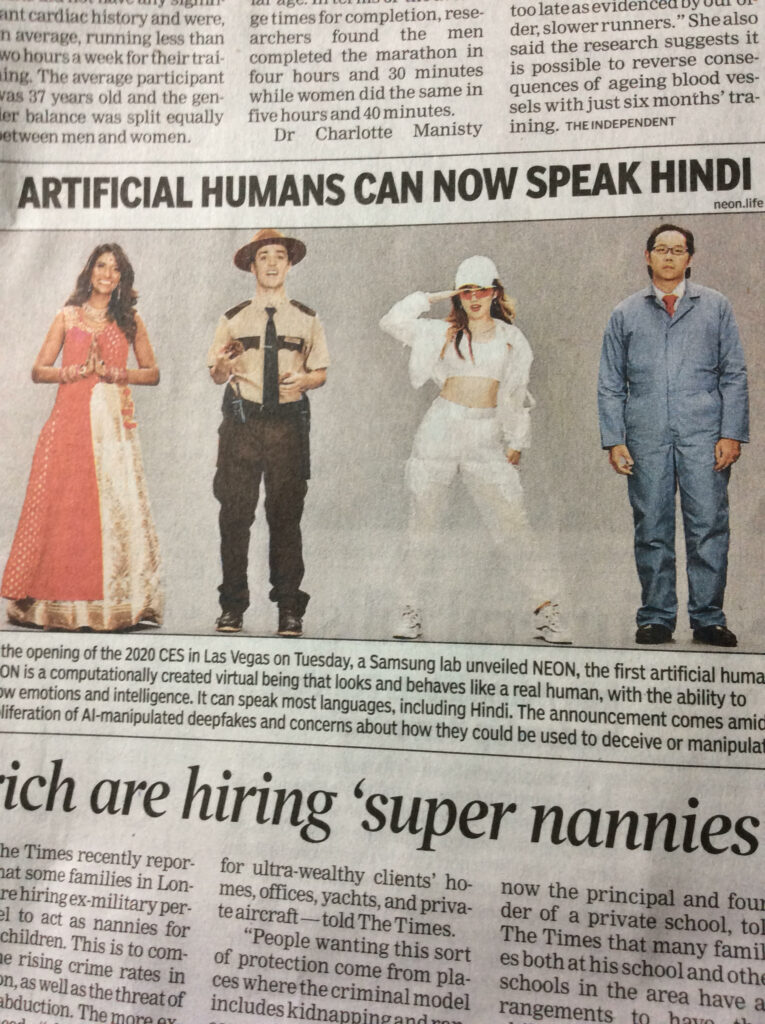 Anticopyright: Editorials and articles originated on TMS may be freely reprinted, disseminated, translated and used as background material, provided an acknowledgement and link to the source, TMS: Robotics and Artbeings — Fact or Fiction, is included. Thank you.