The pattern of thought of Pope Francis’ Encyclic Laudato Sii is not the classical one of the social doctrine of the Church, for which the sacred texts, interpreted by the Magisterium (which is the only one to know them well and at the same time to know well the complex social phenomena, such as a war), prescribe the precise behavior to a faithful. This pattern of though is called integralist, because it brings down from the top of principles and (unquestionable) norms the right behavior (even social) of the members (since their births) of the Church institution.

Instead Laudato sii has the following pattern of thought (represented in the figure):

Notice that Laudato sii attributes structural evil (sin) to everyone (good and bad persons), calls everyone (even the most responsible for pollution) to a conversion from the (common) structure of sin and invites everyone (so much so that it is also addressed to non-believers) to work for a new society.

This pattern of thought is the same as the book of sixty years ago, Les quatre Fléaux (Denoel, Paris, 1959; excerpts in Make straight the way to the God, Knopf, New York, 1974) by Lanza del Vasto (Gandhi’s Catholic disciple and theorist of his thought). 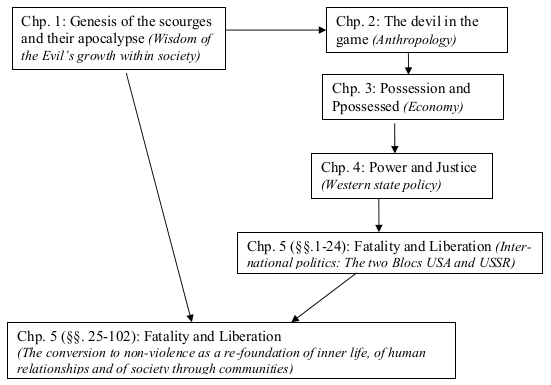 However this book adds much more:

1) within the first box (divine wisdom) it adds to the original sin (Gen 3) all the structural sins (or violence) to which the growth of that sin into social life leads: four scourges (War, Misery, Servitude and Sedition; Ap 6, 8) and [two super-scourges:] Science and Technique (Ap 13), that is, the social institutions that have built the Bomb that has the power to destroy th entire mankind. The book dealt with ecological pollution by understanding it as one of the scourges, that of Sedition, which operates, as well as in social life, in the cycles of nature (ch. 1, 7-13, 25-38; ch. 5, 5, 17, 29, 95).

2) it analyzes human experience not only through ecology, but also anthropology, economics and political science (which also interprets the world political situation of its time: the two Blocks);

3) it calls for conversion not only from the scourge of ecological sedition, but from all structural violences;

4) it directs this structural conversion to apply the Beatitudes (the magna carta of Western non-violence), lso intended as a commitment not only to improve today’s society but also to rebuild it according to its simplest form, which therefore has the least structural sin: the community-tribe-village-little town.

— These two thought patterns are different from that of Liberation Theology, which:

1) considers the upper arrow not so much as interior inspiration, but as direct support for socialist (Marxist) political analysis;

2) through this analysis it sees as evil almost only the social oppression of capitalism;

3) it eliminates the first arrow at the bottom left (who maintains it acts n a non-political way, but only in a pre-political way, or even he remains closed within a religious alienation);

4) it suggests the conversion only to the followers of this Theology (not to capitalists) and conceive it as a conversion primarily intellectual and then of love for one’s neighbor, extended to the only winning subject of history, the proletariat and not to the persons responsible for social evil.

The meaning of this pattern of thought is to finalize religious life to that socialist political project which, in order to achieve the historical liberation of mankind from capitalism, must assume within itself all the social and interior energies. This pattern, which is centered on the right boxes of the other two patterns, is roughly the opposite one to the integralist one, which cancels that boxes.

After this choice, Liberation Theology (which since 1989 has lost the previous political reference to the socialist societies in the World) loses its claim of being the only interpretation-application of the Council to concrete political struggle. In the light of Laudato sii’s thought pattern, Liberation Theology, entirely located in the right side of the previous figures, has as main merit that of having started a great movement in the Christian people for a first, substantial approximation of a new ecclesial social doctrine; however, it did not take into account both what was already proposed by non-violent thinkers, nor by non-violent leaders in South America (Dom Helder Camara, Perez Esquivel, etc.).

Prof. Antonino Drago – Member of the TRANSCEND Network, formerly at the University of Naples. Allied of Ark community, he teaches at the TRANSCEND Peace University-TPU: I have a Master degree in physics (University of Pisa 1961), I am a follower of the Community of the Ark of Gandhi’s Italian disciple, Lanza del Vasto, I am a conscientious objector, a participant in the Italian campaigns for conscientious objection (1964-1972) and the Campaign for refusing to pay taxes to finance military expenditure (1983-2000). Owing to my long experience in these activities and also my writings on these subjects I was asked by the University of Pisa to teach Nonviolent popular defense in the curriculum of “Science for Peace” (from 2001 to 2012) and also Peacebuilding and Peacekeeping (2009-2013); then by the University of Florence to teach History and Techniques of nonviolence in the curriculum of “Operations of Peace” (2004-2010). I was the first President of the Italian ministerial committee for promoting un-armed and nonviolent civil defense (2004-2005). drago@unina.it.

Anticopyright: Editorials and articles originated on TMS may be freely reprinted, disseminated, translated and used as background material, provided an acknowledgement and link to the source, TMS: The Pattern of Thought of the Encyclic Laudato Sii of Pope Francis, is included. Thank you.