Smugglers responsible for mass atrocities in Thailand may be linked to capsized boat carrying refugees from Bangladesh to Malaysia. 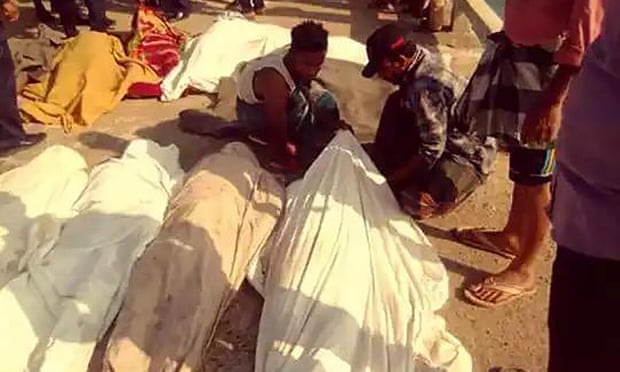 The overloaded boat was carrying about 138 people when it capsized.
Photograph: Joynal Abedin/AP

12 Feb 2020 – Activists fear a dangerous transnational trafficking network is being revived after at least 16 Rohingya refugees drowned in the Bay of Bengal yesterday morning.

A joint statement by the International Organization for Migration and the UN refugee agency said at least 68 people had been rescued.

The UN estimated that more than 170,000 people were trafficked to south-east Asia by boat from 2012–2015, when Thailand found mass graves at detention camps used to hold the refugees until family members paid ransoms.

The network had been largely dormant since then but fears of new activity have risen since more than 700,000 Rohingya fled the Myanmar military in 2017, taking Bangladesh’s total population of Rohingya refugees to more than a million.

The Bangladeshi coastguard has occasionally stopped boats trying to leave through the Bay of Bengal, while a small number of boats from either Bangladesh or Myanmar have arrived in Malaysia.

Bangkok-based Rohingya activist Hajee Ismail said both the few remaining Rohingya in Myanmar and the refugees living in Bangladeshi camps were struggling to see a future for themselves, which was allowing people smugglers to entice them with promises of greater freedom in Malaysia.

“This is not a new network, it’s the old network that woke up now. Since 2015, they’ve been living silently because in Thailand it was difficult to move,” said Ismail, who runs the Rohingya Peace Network in Thailand group, which often provides for support for trafficking victims intercepted by Thai authorities.

He said people were also being taken to Malaysia by land, on long journeys through India, Myanmar and Thailand.

Many of those trafficked to Malaysia were young women and girls taken for marriages arranged with Rohingya men but Ismail said there had been a sharp rise in numbers trying to escape the camps.

“There’s more, more, more. It’s increasing day-by-day,” he said. “Some of our brothers and sisters are thinking that in the refugee camps there is no solution and there is no future for them.”

He said around 500 Rohingya were in Thai custody after being intercepted en route to Malaysia.

The UN has estimated that around 600,000 Rohingya are still living in Myanmar “under the threat of genocide.”

“It is harrowing that Rohingya are so desperate to build better lives for themselves that they risk everything on dangerous journeys by sea,” he said in a statement issued by the Burmese Rohingya Organisation UK.

Puttanee Kangkun, human rights specialist with the Bangkok-based rights group Fortify Rights, said: “The mass movements will always happen when the situation is good enough [for the traffickers].”

Rohingya activist Ziaur Rahman, who was kidnapped in Bangladesh and trafficked to Malaysia in 2014, said Rohingya were being exploited because the international community had not provided a solution to decades of persecution.

“This thing needs to be stopped, you saw before so many people were killed. Their bodies will be found in the sea, their bodies will be in the jungle and the mountains,” he said, adding that he believed it was the same criminal syndicate who trafficked him to Malaysia.

“It’s become a big business for many people, in Myanmar, Bangladesh, Thailand and Malaysia. They’re taking advantage and killing my people.”

Thailand prosecuted 62 members of the trafficking network in July 2017, including a senior army general, and in 2019 Malaysia established a royal commission of inquiry to investigate human trafficking.

Many of those prosecuted were involved in transporting Rohingya and Bangladeshis within Thailand, where they were routinely held captive in Thai jungles until their relatives agreed to pay ransoms of around $2,000 (£1,548).

“The reality is I’ve been here six years and still I’m living in limbo, there is no future,” he said.

“We are not allowed to work, our kids cannot study, how are we going to eat? Every day we are struggling.”