5 Feb 2020 – At a meeting in London’s St. Pancras New Church on Monday [3 Feb] night, United Nations Special Rapporteur on Torture Nils Melzer provided new information about the efforts of the British government and the establishment media to hinder his defence of imprisoned WikiLeaks founder Julian Assange.

Melzer delivered a powerful contribution at the event, organised by academic Deepa Driver and held under the banner of “Free the Truth.” Other speakers were former British diplomat and whistleblower Craig Murray, Lisa Longstaff of Women Against Rape and Eva Joly, who previously served as an investigative magistrate and representative of the French Greens in the European parliament. 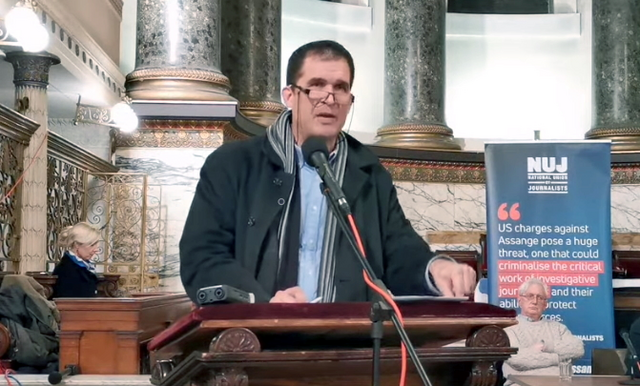 Melzer explained that since releasing his finding in May 2019 that Assange had been subjected to an unprecedented nine-year campaign of persecution by Britain, Sweden and the US, resulting in medically verifiable symptoms of “psychological torture,” his inquiries and recommendations had been ignored.

“States refused to investigate or engage in a dialogue about my findings, even to respond to the questions I am mandated by them to ask,” he stated.

The UN official revealed that behind the scenes, British authorities had actively sought to undermine him.

“They went to see the United Nations High Commissioner on Human Rights to complain about me. They don’t seem to realise that I am independent, I am appointed directly by the Human Rights Council. But the ambassador in Geneva seems to have told her that he is ‘not happy’ with the way I conduct my mandate. Incidentally, I heard they also told my employer in Glasgow that they were not too happy with how I conducted my mandate.”

That the British government is simultaneously stonewalling Melzer’s inquiries, and apparently conducting a campaign against him, underscores the flagrant illegality of the entire US-led vendetta against Assange.

Melzer is employed at the University of Glasgow as a professor of international law, independently of his role as a UN official. The only reason for the British authorities to contact the university would be to pressure it to act against Melzer over the principled position he has taken in the Assange case. Such conduct recalls the attacks by the British and American governments on UN experts who publicly condemned the lies about “weapons of mass destruction” in the lead-up to the illegal invasion of Iraq.

“I refuse to be intimidated. I conduct the mandate that the United Nations has given to me, according to the best of my morality and my judgement. It is a violation of my independence to try to circumvent official procedures and to try to undermine my credibility and standing with the United Nations and my employer. And I will certainly not back down.”

The rapporteur noted that some critics had accused him of “overstepping the line” and had claimed that the treatment of Assange had “nothing to do with torture.” In reply, Melzer asked:

“How does it have nothing to do with torture when a man exposes evidence of government war crimes, and torture and no one is being prosecuted for it?”

His assessment that Assange had suffered torture was based on an extended consultation last year, involving two medical experts, Melzer explained. The diagnosis was arrived at under “The Istanbul Protocol,” the international standard for identifying symptoms of torture.

Assange, Melzer warned, was being “publicly destroyed before our eyes,” in a “slow-motion” operation intended to intimidate “everyone else in the world who could have the dangerous idea of copying WikiLeaks.” If extradited to the US, he had no prospect of receiving a fair trial. Melzer noted that while Assange faced 175 years imprisonment, under US charges, the maximum-sentences handed down to those convicted of war crimes in the former Yugoslavia was forty years. Assange, however, had “not killed or harmed anybody,” but had merely published true documents.

Melzer responded to claims he had “lost” his “neutrality,” asking:

“Am I supposed to be impartial between a torturer and the tortured? No. I am meant to be neutral and objective in investigating a case, and not to have any presumptions before I have investigated. But once I have found that someone has been tortured, of course I am not neutral. I will defend them.”

It was not just the government that was seeking to undermine support for Assange. Melzer revealed he had “been asking the BBC for an interview for nine months.” He had offered to appear on the “Hard Talk” program to discuss Assange’s case, but had been rebuffed with the claim that it would not be “newsworthy.”

At the same time, BBC reporters continued to slander Assange. One had claimed last month that Assange “evaded justice” when he exercised his right under international law to seek political asylum in Ecuador’s London embassy in 2012. Melzer asked: “In 1940, Hannah Arendt, arrested for anti-state propaganda, successfully escaped the Gestapo and Vichy internment and received asylum in the US. Did she ‘evade justice?’” He recalled other cases of dissidents escaping persecution, including by seeking asylum in foreign embassies.

Melzer noted that these lies were part of a broader attempt to suppress discussion about the dire implications for democratic rights of Assange’s threatened extradition. A panel on the “Legal, Systemic and Reputational Implications of the Assange Case” had been scheduled at Chatham House on Tuesday. The prominent London policy institute had cancelled the event, without providing a reason, forcing it to be moved to the Frontline Club.

Melzer warned that the Assange case had revealed a broader assault on civil liberties. “As soon as establishment power is threatened, we do not have the rule of law,” he stated, concluding that it was “really urgent” to “strengthen our voice” in Assange’s defence.

Craig Murray delivered a contribution from the perspective of a whistleblower who had exposed the British Labour government’s collusion in US-sanctioned torture and extraordinary rendition operations in Uzbekistan.

He recounted the case of Clive Ponting, a British civil servant who had publicly exposed the lies of the Thatcher government used to justify its aggression against Argentina in the Falklands War of 1982. Ponting had been charged with violating the Official Secrets Act but had been acquitted by a jury of his peers. The British authorities had not prosecuted Murray in the early 2000s, the former ambassador said, for fear of a similar result.

If he had leaked government information now, however, Murray said he would be hauled before a secret court, in a trial presided over only by a judge. Under draconian national security provisions, the media would be prohibited from reporting the case. The attempted prosecution of Assange was even more extraordinary, given that he was a publisher and not a whistleblower. “What they are doing to Julian is the equivalent of prosecuting Lionel Barber, the editor of the Financial Times, for publishing what I leaked—it would be the death of journalism.”

Eva Joly warned that the US was seeking to apply its repressive domestic laws on a global scale. She stated:

“Julian Assange must not be extradited and only a very massive mobilisation of ordinary people and of people from the law community can stop it because it has been programmed for years that he should be sent to the US.”

Lisa Longstaff reviewed the way in which false accusations of sexual misconduct in Sweden had been used to deprive Assange of his legal and democratic rights and tarnish his reputation. The concocted Swedish investigation had “nothing to do with justice for rape,” but was part of an attempt by the US and its allies to abolish the “freedom to report crimes by the state.”

Longstaff hailed Chelsea Manning, the courageous whistleblower who is imprisoned in the US for refusing to provide false testimony against Assange as “one of the most principled people we know of,” and insisted “we must do all in our power to get her free too.”

Assange’s father, John Shipton, thanked all of those in attendance, and encouraged them to intensify the campaign for his son’s freedom.