A New Book on Iran 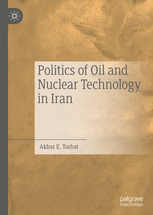 A new book entitled Politics of Oil and Nuclear Technology in Iran has just been published by Palgrave Macmillan. In it, Johan Galtung’s version of the Center Periphery model, described in his article entitled “A Structural Theory of Imperialism,” has been used as an analytical framework.

“The book focuses on oil politics and development of nuclear technology in Iran, which is supplemented with some historical background on Iran’s foreign relations to make the book self-contained. The book is divided into three parts. Part I contains a brief description of major wars and treaties with foreign powers and economic concessions given to foreigners by the Qajar Kings. Part II discusses geopolitics of oil in the Persian Gulf, Iran’s struggles to nationalize its oil, the Anglo-American Coup, formation of the oil consortium, and the fall of Mohammad Reza Shah Pahlavi in the context of oil politics in 1979. The primary portion of Part III is about the United States’ confrontation with Iran over its nuclear program.  The book concludes by comparing similarities and differences of Iran’s oil nationalization conflict with the present controversy over its nuclear program; in both cases, Iran was encountered by the West’s economic and political pressures while pursuing its national interests, and finally it was coerced  to give up to the West’s demands.”

A Paragraph from the Book:

“Galtung’s theory explains the situation of some oil-rich countries in the Persian Gulf region, where petrodollars are recycled from them to the West by the ruling elites and their families in form of investment in financial instruments. Because of the need for return of the petrodollars, the West has an interest to prevent these countries from becoming industrialized. In the last chapter, the author attempts to use Galtung’s model to demonstrate Iran’s relations with the Western nations throughout its recent history.”

Akbar E. Torbat is Adjunct Professor of Economics at California State University, Los Angeles. USA. He has also taught at the University of California – Los Angeles and the University of Southern California. He has written many scholarly articles, and his articles have been published in academic journals such as The Middle East Journal and The World Economy. He has been frequently interviewed by various media outlets regarding foreign policy issues.

Anticopyright: Editorials and articles originated on TMS may be freely reprinted, disseminated, translated and used as background material, provided an acknowledgement and link to the source, TMS: A New Book on Iran, is included. Thank you.

One Response to “A New Book on Iran”