Letter from President Maduro as the U.S. Threatens Venezuela with War

2 Apr 2020 – Associated Press reports the United States is sending naval ships to patrol the Caribbean as the US falsely accuses the Maduro administration with trafficking narcotics while ignoring the countries actually engaged in drug trafficking such as US allies Ecuador, Colombia and Honduras.

“President Donald Trump announced yesterday that Navy ships are being moved toward Venezuela as his administration beefs up counter-narcotics operations in the Caribbean following a U.S. drug indictment against Nicolás Maduro.” AP adds, “The deployment is one of the largest U.S. military operations in the region since the 1989 invasion of Panama to remove Gen. Manuel Noriega from power and bring him to the U.S. to face drug charges. It involves assets like Navy warships, AWACS surveillance aircraft and on-ground special forces seldom seen before in the region.”

This aggressive action follows many attempts to undermine the democratically-elected and Constitutional government of Venezuela led by President Maduro and signals a prelude to an outright military attack by the US on Venezuela. 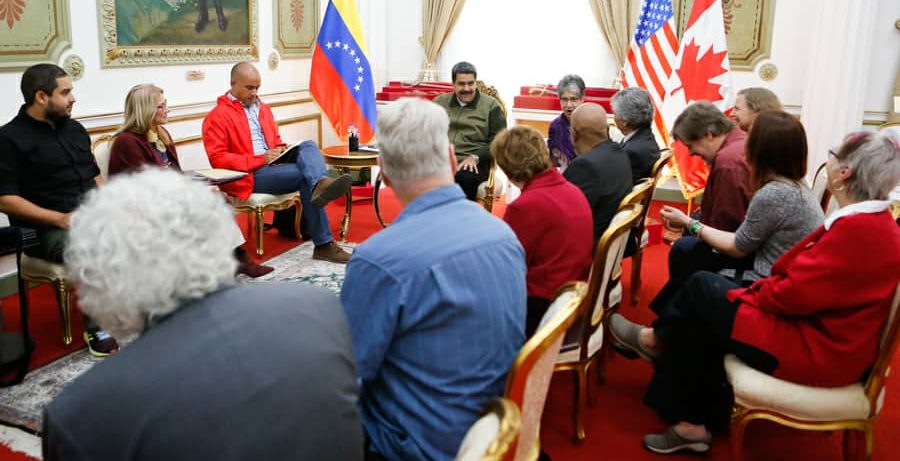 President Maduro meets with a peace delegation from the United States and Canada in March 2019 where he expressed a desire for peace between our countries but said that Venezuela was prepared to defend itself if necessary.

To the Peoples of the World,

In greeting you, with affection, I take the liberty of addressing you on the occasion of denouncing the severe events taking place against the peace and stability of Venezuela, at a time when the concern of the States and Governments should be focused on the protection of the life and health of their citizens, due to the acceleration of the COVID-19 pandemic.

As it is publicly known, last March 26, the government of the United States announced a very serious action against a group of high officials of the Venezuelan State, including the Constitutional President of the Republic, Nicolás Maduro.

This action consisted in the presentation of a formal accusation before the American judicial system, which is not only by illegal in itself, by also seeks to support a false accusation of drug trafficking and terrorism, with the sole objective of simulating the alleged judicialization of the Venezuelan authorities.

This American performance includes the unusual offer of an international reward to anyone who provides information about the President and the high Venezuelan officials, leading to a dangerous moment of tension in the continent. I, therefore, consider it necessary to make an account of the facts, which reveal the perverse plot behind the accusations of the Department of Justice.

Just one day before, on March 25, the Bolivarian Republic of Venezuela denounced before national and international public opinion the development in Colombian territory of an operation aimed at attempting against the life of President of the Republic, Nicolás Maduro Moros, his family members, and high State officials; as well as attacking civil and military objectives in our country, accusing Mr. Clíver Alcalá, a retired general of the Venezuelan armed forces, of being the military chief of that operation.

This denouncement was made with all responsibility, after a control operation in the road to the north of Colombia, near the border with Venezuela was announced on March 24, in which the police of that country captured a batch or war weapons in a civilian vehicle.

The investigations revealed that it was a sophisticated arsenal aimed at a group of former Venezuelan and Colombian military and paramilitary personnel who were training in camps located in Colombian territory.

On March 26, the aforementioned Clíver Alcalá, gave a statement to a Colombian media outlet -from his residence in the city of Barranquilla, Colombia- in which he confirmed his participation in the reported events, confessing to being the military leader of the operation and revealing that the weapons were purchased by order of Mr. Juan Guaidó, national deputy, who calls himself interim President of Venezuela and serves as Washington’s operator in the country. He also confirmed that the weapons were intended to carry out a military operation to assassinate senior members of the Venezuelan State and Government and to produce a coup d’état in Venezuela.

Mr. Alcalá clarified that the weapons were purchased through a contract signed by himself, Mr. Juan Guaidó, U.S. advisors and Mr.Juan José Rendón, political advisor to President Iván Duque, and carried out with the knowledge of Colombian government authorities.

In the face of this confession, the unusual response of the United States government has been the publication of the accusations mentioned at the beginning of this letter, with the extravagant inclusion of the name of Mr. Alcalá, as if he were part of the Venezuelan authorities and not a mercenary hired by the United States to carry out a terrorist operation against the Venezuelan government.

As a demonstration of this statement, I need no more proof than to mention the alleged capture of Mr. Alcalá by Colombian security forces and his immediate surrender to U.S. DEA authorities, in a curious act in which the prisoner, without handcuffs, was shaking hands with his captors, right in front of the stairs of the plane that would take him on a special VIP flight to the United States, which shows that in reality, this whole set-up is about the rescue of someone they consider a U.S. agent.

It must be stressed that the unsuccessful armed operation was originally designed to be executed at the end of this month, while all of Venezuela is fighting the COVID-19 pandemic. Actually, this is precisely the main battle that concerns humanity today.

A battle that our nation is successfully waging, having managed to stop the contagion curve, reinforcing health provisions and keeping the population in a massive quarantine, with a low number of positive cases and deaths.

For all these reasons, the Government of the Bolivarian Republic of Venezuela alerts our brothers and sisters of political organizations and social movements around the world about the reckless and criminal steps being taken by the administration of Donald Trump which, despite the frightening acceleration of the growth of COVID-19 affecting the American people, seems determined to deepen its policy of aggression against sovereign states in the region, and especially against the Venezuelan people.

During the pandemic, the U.S. government, instead of focusing on policies of global cooperation in health and prevention, has increased unilateral coercive measures, has rejected requests from the international community to lift or make flexible the illegal sanctions that prevent Venezuela from accessing medicines, medical equipment, and food.

At the same time, it has banned humanitarian flights from the United States to Venezuela to repatriate hundreds of Venezuelans trapped in the economic and health crisis in the northern country.

By denouncing these serious facts, Venezuela ratifies its unwavering will to maintain a relationship of respect and cooperation with all nations, especially in this unprecedented circumstance that forces responsible governments to work together and put aside their differences, as is the case with the COVID-19 pandemic.

Under such serious circumstances, I request your invaluable support in the face of this unusual and arbitrary persecution, executed through a new version of that rancid McCarthyism unleashed after World War II. At that time, they willingly labeled their adversaries as Communists in order to persecute them; today they do so by means of the whimsical categories of terrorists or drug traffickers, without having any evidence whatsoever.

Condemning and neutralizing today these unjustifiable attacks against Venezuela will be very useful to prevent Washington from launching similar campaigns against other peoples and governments of the world tomorrow. We must all adhere to the principles of the United Nations Charter, to prevent excessive unilateralism from leading to international chaos.

Brothers and sisters of the world, you can be absolutely sure that Venezuela will stand firm in its fight for peace and that, under any circumstances, it will prevail. No imperialist aggression, however ferocious it may be, will divert us from the sovereign and independent path that we have forged for 200 years, nor will it distance us from the sacred obligation to preserve the life and health of our people in the face of the frightening global pandemic of COVID-19.

I take this opportunity to express my solidarity and that of the people of Venezuela to all the peoples who today also suffer serious consequences from the effects of the pandemic. If we are obliged to draw any lesson from all this difficult experience, it is precisely that only together we can move forward. The political and economic models that advocate selfishness and individualism have demonstrated their total failure to face this situation. Let us firmly advance towards a new World with justice and social equality, in which the happiness and fullness of the human being is the center of our actions.

I appreciate the solidarity that you have permanently expressed towards my country and my people, denouncing the criminal blockade to which we and many other nations are subjected. I take this opportunity to reiterate my respect and affection, and to invite you to continue united, plowing a future of hope and dignity.

Nicolás Maduro Moros, President of the Republic of Venezuela