The Absolute Truth: What or Who Is It? 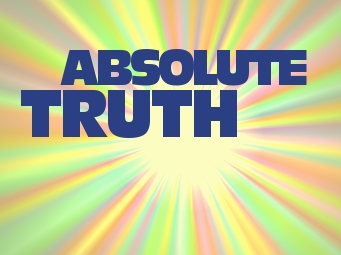 Scientists agree that all time, all history, and all creation start from a single point. And that point would have to be the ultimate or Absolute Truth. So what exactly is the Absolute Truth? How do we go back through time and space to find the original source of everything? Even if we research the Bible, the Koran, the Jewish writings, or even the Sikh, Zoroastrian, or Buddhist texts, we will find limited information on what is the Absolute Truth. And forget about depending on modern science, they are still searching and have many varying theories to offer.

Fortunately, the Vedic texts of India have always been a guiding light to provide knowledge of what is the Absolute Truth. For example, the second verse of the Vedanta Sutras (1.1.2) clearly explains, The Absolute Truth is that omniscient, omnipotent, all-merciful Being from whom proceeds all things (origins, sustenance, and dissolution).

This is similar to the Aitareya Upanishad (1.1.2) which states, He (the Supreme Person) created this entire material world.

Herein we start to understand that the Absolute Truth is a person, the Supreme Person, who is all-powerful, fully merciful, and the origin and source of everything. Thus, the single point from which all time, history, and creation originate is this Supreme Person, God. Actually, this is only logical because material nature is inert. It cannot be the cause of its own creation. Thus, a living brain is behind the great plan for this manifestation. Seeing how everything is wonderfully arranged in this material world for its continued existence, we should understand that a living brain, a person, is the cause of this development, just as a building cannot develop and build itself.

The Aitareya Upanishad (3.11) goes on to explain, He saw, and His power sent forth the creation. The Brihadaranyaka Upanishad (4.4.22) continues, He is the Lord and controller of everyone.

The Vishnu Purana (1.3.2) also explains that all creative energies that act in the process of creation, maintenance, and annihilation are the natural characteristics of the Supreme Truth, just as heat and light are the natural energies of fire. Therefore, we can understand that everything in the cosmic creation emanates from this Absolute Truth, and even after its annihilation the material energies again enter the same Absolute Truth.1

The definition of this Absolute Truth is presented in the Vishnu Purana,2 that He is the all-pervasive, all-increasing, changeless soul of all. Furthermore, He is one without a second, without whom nothing can exist.3

The Svetasvatara Upanishad (6.1-5) goes on to explain that God is the ultimate cause of all causes. It is He, the Supreme Person, who pervades the whole world with His consciousness and power. He is the controller of time, through which the creation itself unfolds. It is He who sets the creation in motion and then rests peacefully, after uniting the individual jiva souls with the principles of matter. He is the primal cause of the universal creation and propels the living beings toward their material desires. He is the one reality without a second, beyond matter and time. He is beyond the perception of our senses but can be perceived through the eyes of devotion. He is immortal and the monitor of every living being as the Supersoul in the core of everyone’s heart. Knowing Him in this way can lead one to final liberation from the material energy.

The point that God is one only is repeated in the Svetasvatara Upanishad (3.2), Truly God is One; there can be no second. He alone governs these worlds with His powers. He stands facing beings. He, the herdsman [meaning Sri Krishna], after bringing forth all worlds, reabsorbs them at the end of time.

Herein we get an additional hint of who is this Supreme Person. We find He is called the herdsman, which is a clear reference to His pastime of being a cowherd boy. This is none other than Lord Sri Krishna. And this manifestation of His material energy is considered to be only one of His innumerable pastimes.

In the Vedic classic Bhagavad-gita (7.6-7)  Lord Krishna is quite clear about being the Absolute Truth, wherein He says, Of all that is material and all that is spiritual in this world, know for certain that I am both its origin and dissolution. No truth is superior to Me. Everything rests on Me as pearls are strung on a thread. Also (9.5), Krishna explains that He is the maintainer of all living beings and the very source of creation.

In the four most important verses in the Bhagavad-gita (10.8-11), Sri Krishna explains, I am the source of all spiritual and material worlds. Everything emanates from Me. The wise who know this perfectly engage in My devotional service and worship Me with all their hearts.

Even the Rig-veda (1.22.20 & 21), one of the oldest of all Vedic texts, establishes that there is no higher truth than Lord Vishnu, Krishna. The supreme abode of Lord Vishnu, or the lotus feet of Lord Vishnu, is spread all around like the sunlight in the sky. Great demigods and saintly persons always see that supreme abode, recognizing Him as the highest truth. Spiritually awake souls learned in transcendental understanding glorify the Lord and make that abode more brilliant.

Srila Jiva Gosvami also presents a common verse that is found in three Puranas, namely the Padma Purana, Linga Purana, and the Skanda Purana, which states,

“By scrutinizingly reviewing all the revealed scriptures and judging them again and again, it is now concluded that Lord Narayana is the Supreme Absolute Truth, and thus He alone should be worshiped.”

The Srimad-Bhagavatam (Bhagavat Purana) (10.85.4) also specifically relates how Lord Krishna is, the Supreme Personality of Godhead, who manifests as the Lord of nature and the creator of nature [as Maha-Vishnu]. Everything that comes into existence, however and whenever it does so, is created within You, by You, from You, for You, and in relation with You.

The Srimad-Bhagavatam (11.24.19) goes on to describe how the material nature, time, and Maha-Vishnu, all come from Krishna, who is the Absolute Truth. Furthermore, it is explained that the entire cosmic creation is caused by Lord Krishna, and the material manifestation is an effect of His energy.4

The  Vishnu Purana (1.12.69) goes on to explain that the nature of the Supreme Being Himself is sat-chit-ananda-vigraha. This means the personal form of God is eternal and full of pleasure and knowledge. Thus, he is beyond all material influences. However, the living entities, being part of the Supreme in quality, can also experience this eternal pleasure and knowledge to a lesser degree once they regain their eternal spiritual position. 6

Thus, whatever we see in this material world is but an expansion of the different energies of the Supreme Person.7  It is He who is the Supreme Being and Creator of all. This is why the Brahma-samhita (5.1) explains that, Krishna, who is known as Govinda, is the supreme controller. He has an eternal, blissful, spiritual body. He is the origin of all. He has no other origin, for He is the prime cause of all causes.

This is also why Krishnadas Kaviraja further explains in his Chaitanya-caritamrita (Adi-Lila, 1.3), What the Upanishads describe as the impersonal Brahman is but the effulgence of His body, and the Lord known as the Supersoul is but His localized plenary portion. He is the Supreme Personality of Godhead, Krishna Himself, full with six opulences. He is the Absolute Truth, and no other truth is greater than or equal to Him.

The Srimad-Bhagavatam (1.3.28) specifically relates Krsnas tu bhagavan svayam, which means that out of all the various avatars of God, Lord Sri Krishna is the Supreme Personality of Godhead in person. All other incarnations or avatars are but plenary portions or portions of the plenary expansions of the Lord.

In this way, we can understand that the ultimate philosophical conclusions, as presented in the above Vedic references, and by various spiritual authorities, is that the Absolute Truth is a person, known in the Vedic literature as Sri Krishna. It is He who manifests the material creation through His various forms and energies. Many more verses that establish this are found in the Bhagavad-gita, Brahma-samhita, as well as various Puranas and other Vedic texts written by many spiritual masters and teachers that verify this point.

Stephen Knapp (Sri Nandanandana dasa) has dedicated himself to spreading the deepest and most practical levels of spiritual knowledge about the soul–our real identity. Though this world may give us numerous challenges, when we rise above the basic materialistic view and its limited search for solutions, our evolutionary development on all levels greatly accelerates. By recognizing that we are all spiritual beings who are, basically, attempting to achieve the same essentials for our existence–namely love, acceptance, harmony, peace, and happiness, not to mention the ordinary needs of food, water, clothing and shelter–we can reach a new level of cooperation with each other. Stephen has written many books on this and related subjects and studied with A. C. Bhaktivedanta Swami Prabhupada becoming initiated into the spiritual line of Brahma-Madhava-Gaudiya sampradaya. He is also president of the Vedic Friends Association. srinandan@aol.com