War and Peace in the Globalized World (Part II)

In Part I of this article (here), our aim was to explore the conditions of war and peace in today’s globalized world. Starting with a few time-tested empirical observations about human nature and about conflict, we hoped to explore their continuing relevance today.

The point explored in Part I was the almost inevitable economic schism which occurs in a country if all political power becomes concentrated in the hands of the extremely rich. The schism has a huge bearing on power-mongers’ choice between conflict and peace.

In Part I, we denoted by ‘A’ the vast majority of law-abiding people of a country, and by ‘B’ the so-called ‘ruling elites’, the small minority with a very strong grip on economy and politics.

‘Birds of a feather fly together’ is the rule. No ‘special one’ wishes to be seen to be close to the average Joe or Jane. Therefore social, business and political ties are far stronger among ‘ruling elites’ across countries, than across the deep ‘economic schism’ in one country.

The diagram below shows how ‘B-networks’ operate among four countries AB1, AB2, AB3, AB4. Similar networks span all the 200 odd countries of the world. 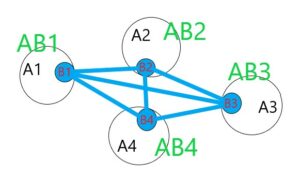 As discussed in Part I, each of these countries is effectively divided into two parts A and B. A represents the majority; B represents the so-called ‘ruling elite’.

B-types around the world want maximum annual returns on their already massive assets.

To that end, B1, B2, B3, B4 et cetera compete, collude or collaborate with each other as the need arises. To them, the rest of mankind – A1, A2, A3, A4 et cetera – are people of a different kind. Call them deplorable, underdeveloped, backward, lower caste … whatever.

To keep the gravy-train rolling, the basic code of behaviour of the B-types is: Whatever it takes. There is absolutely no other morality or ethic underlying their behaviour.

The situation was no different in earlier centuries. A study of World War II, for example, reveals close business and political ties between ‘elites’ whose countries were at war with each other.

This situation does not bode well for the majority of law-abiding people in the world. Until people wake up to the dirty games of the ‘ruling elites’, they would be in no position to effect a change for the better; in fact their naïveté is most convenient to the ‘ruling elites’.

In this situation – right out of the blue! – we are struck by the Covid-19 pandemic.

The world is experiencing a huge disruption in life, which will last for at least a few more months and leave behind far lingering after-effects. This disruption will be painful, for sure; but it will also have one badly-needed salutary effect. It will force all of us to question seriously the unstated assumptions underlying the modern, self-centred life.

To paraphrase the first few lines of a famous poem:

‘How do I fool me? Let me count the ways.

‘Modern life’ cheats people out of the fulfilment of their own true needs. Foolhardy though it is, we may try to count the many ways in which this happens. In no particular order:

If Homo Sapiens choose to live out a third-rate soap opera on the planet, then they become disposable to nature. It is really as simple as that. In the incredibly wonderful theatre of all life on the planet, there is no room for tawdry soap operas. Sadly, that is what ‘modern life’ has rather proudly opted – and even paid a heavy price! – to become.

It is conceivable that the shakeout caused by Covid-19 rids the planet of humankind’s fragile, self-centered and dangerous delusions. One can hope that these make way for human life which is more durable, modest, non-violent, peaceful and compassionate.

Across the world, the ordinary people and the ‘ruling elites’ will both feel the heat from the pandemic. As is their long-ingrained habit, the ‘ruling elites’ will focus only on protecting their power and privilege. The difficult struggle against Covid-19 will be waged mainly by the average law-abiding folk serving bravely on the hazardous ‘frontlines’.

A plausible explanation of how this virus so badly infected humans involves a leak from a virology lab, compounded by unfortunate state suppression of vital public health information. The suppression reflects the never-ending craving of all ‘ruling elites’ to become the ‘ruling elites of the known world’ – in the style of Shah-an-shah or Capo di tutti capi.

The quality of ‘governance’ is at stake, and no amount of clever PR will be able to disguise failure. As a certain famous investor reportedly says, albeit in a very different context, ‘When the tide goes out, we see who has been swimming naked’.

That brings to mind the famous story of the emperor who had no clothes. In the midst of the global Covid-19 challenge, a little-known sequel to this story must be told.

After the boy and his father return home, the boy asks his father why no other person in the crowd pointed out that the emperor had no clothes.

‘It is much worse than you think, son. Everyone in town knows that, even with his full royal dress on, the emperor would still lack common sense, courage and fairness.’

‘But then why was everyone so quiet, dad?’

the dad replies, while slowly drawing his index finger across the throat. The boy learns a useful lesson about ‘ruling elites’.

Anticopyright: Editorials and articles originated on TMS may be freely reprinted, disseminated, translated and used as background material, provided an acknowledgement and link to the source, TMS: War and Peace in the Globalized World (Part II), is included. Thank you.