A Beacon in India’s Deep Hinterland

In the last two decades, the gender landscape in rural India has been greening, and women are now on the cusp of a powerful social and political revolution. The harbinger of this change is a unique policy experiment in village-level governance, the Panchayat Raj Act, which has brought transformative results for the weakest of the weak: the village women. In a country that has a bad scorecard in matters of gender equality, India has set a stellar example by becoming a crucible for one of social democracy’s most innovative experiments in gender justice. Women now steer   local governance in thousands of villages.

This revolution led to the discovery of several hidden comets in the deep crannies of India. One of them is Shalan Shelke, an intrepid and passionate woman with a unique brand of perseverance and determination. She has galvanized the poor, unlettered women in Sangamner, a remote corner of India’s deep hinterland. Sangamner is the site of the confluence  (sangam) of three rivers: Pravara, Mhalungi, and Adhala in Ahmednagar district of Maharashtra.

Now a 49-year-old firebrand, Shalan was one of the hundreds of emerging leaders who realized early that powerful things could happen if marginalized communities were involved in finding solutions to pressing issues—they just needed the right tools to get started. She is now a burning crusader and has been campaigning for a number of social causes. By giving marginalized women a stake in the outcome of their communities, Shalan and her band of workers are trying to unlock human potential, both for themselves and for thousands of similar women in villages around Sangamner. 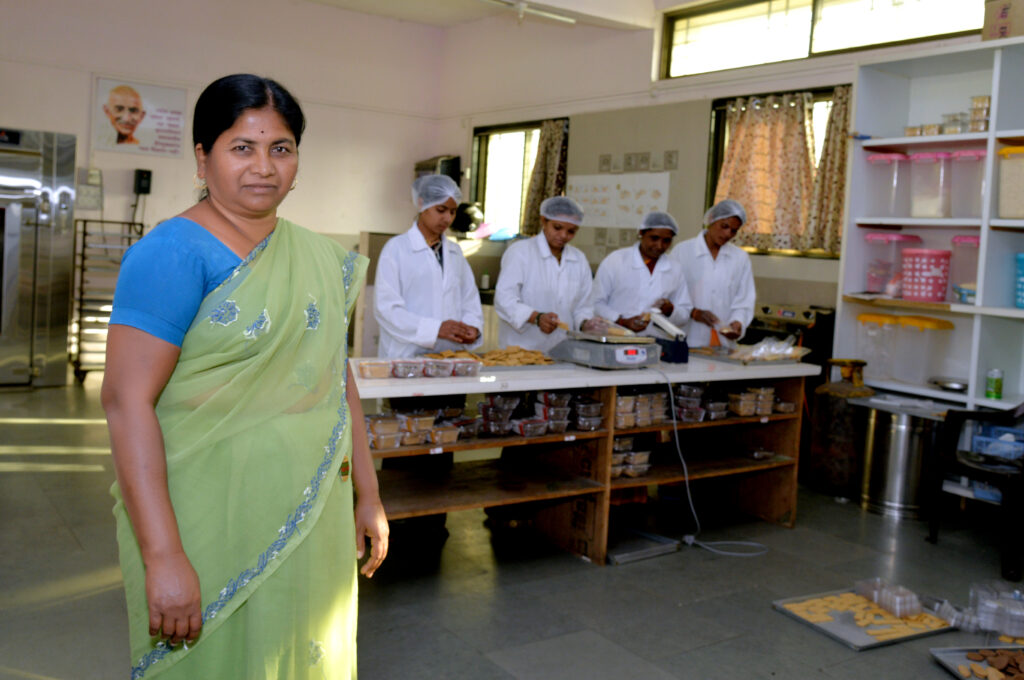 Shalan was 20, barely out of college, when she became a social activist and entrepreneur. Although she had mentors and gained experience from friends, her work was tough. She largely taught herself advocacy and business skills in a male-dominated culture. “Being a woman in this space is challenging,” Shalan says. She recalls how “scary” it was as she saw her efforts land her in trouble, but slowly relatives and friends rallied around and chipped in.

Shalan’s voice is one among many pushing for women’s rights, a strike against the silence that is often the status quo. In recent years, women have felt more empowered to call out men’s wrongdoings, leading to conversation about the power dynamics that women are subjected to in the home and beyond. In many ways, it’s still a man’s world, yet women are working to change that in their communities. Change is seldom easy. The patriarchal status quo is deeply entrenched, especially in traditional societies where challenging the system comes at a hefty cost.

Shalan’s journey began with the founding of Nirmiti Mahila Udyojik Sahakari Sanstha (Nirmiti Women’s Industrial Cooperative Society) in 2001 in Sangamner. It supports local communities to transition from a supply-led to a demand-driven approach and harnesses resources from the departments of agriculture, tribal welfare, and other government agencies. Through their multiple roles and responsibilities, women are learning, adapting, and reinventing themselves along the way. The society now has about 900 members with a yearly turnover of about INR 90 lacs.

A chance encounter in 2003 helped Shalan make her mark as a business leader and also put me on a wonderful journey. I was posted in Mumbai to head my bank’s state operations in microfinance. Shalan was heading a federation of self help groups of women in Sangamner. She was also a prominent face on various platforms in Mumbai and Pune for rural women. I was amazed at her understanding of global economics, particularly her ability to analyze local issues in the international context. I continue to marvel at the logical precision with which she presents the economic and social case of marginalized women.

It was around this time that Shalan and her colleagues decided to set up an organic fertilizer manufacturing unit. One of the primary livelihood activities of women in her federation was the collection of neem seeds, which were processed and the product supplied to manufacturers of fertilizers and pesticides. Shalan and her associates decided to set up their own production facilities to enhance employability for locals. The loan processing was fast-tracked and the loan released in time, thanks to Shalan’s perseverance. However her dreams couldn’t get wings. Due to her own lack of experience and the technical inadequacy of the team to whom the job of assembling the plant was outsourced, the unit couldn’t take off.

It was a major setback but she fought back. She and her partners didn’t let the bank down either. They paid off the entire loan from their own hard-earned savings. She has grown wiser in the process and has preferred to spread her risks evenly by opting for joint ventures.

While pursuing her entrepreneurship journey, Shalan didn’t lose sight of her primary mission: advocacy for broader social issues of poor and discriminated women. In 2006, she started a magazine to channel the voices of these women. It is named Bahina, after a local poetess Bahinabai Choudhari who was herself unlettered but composed inspiring verses.

The coverage of rural issues in the mainstream media is very spotty, and Bahina has certainly filled an important space. It has a distinct activist flavour and serves as a hyper local platform. The region’s arid expanse overflows with social and economic strife. This strife has been channeled into the magazine’s writings where issues are reported and analyzed from a feminist perspective.

The magazine has brought about immense change in the lives of the people it reaches. It has been able to capture the groundswell of discontent and package the subtle nuances of the  discourse in a highly palatable form. It has been able to build the perspectives of women so they are equipped in their effort to upend the feudal system that kept their female ancestors trapped in servitude.

Shalan has also tapped business opportunities for women to have a reliable and consistent source of income. In 2011, the co-operative set up a canteen at the girls’ hostel in the local university campus. The canteen caters to 500 girls, providing nutritious, hygienic meals made from locally grown crops and vegetables. Three years later, Nirmiti started canteen services for the students of Lok Panchayat Rural Technology College established in Sangamner. In 2016, Nirmiti set up its own Co-operative Credit Society. It has 1,237 members with a share capital of 20 lacs and fixed deposits of INR 1.25 crores.

The bakery now employs about 15 women and has generated employment for many individuals who serve as retailers. The two mainline products, Bite First and Happy Roots have become powerful local brands. The collaboration with Happy Roots has led to a synergy of diverse strengths for mutual gains in both organizations.

Happy Roots works with smallholding farmer groups and women’s self help groups to create sustainable value chains from farm to market. Through them, it is bridging the knowledge gap and enhancing information networks that help gain access to economic, financial and policy resources and creating livelihood and entrepreneurship opportunities for these communities. Nirmiti has earmarked a land parcel of 3,000 sq ft for the manufacturing facility. The unit is fully owned and managed by Nirmiti Mahila Udyojik Sansthan and has 2,000 farmers in Ahmednagar district as its trusted customers.

Farming can greatly help women gain support from their husbands and male community leaders to desensitize traditional dynamics of gender. Farming can help women fully reach their potential. Nirmiti has been able to use this wisdom to build a cadre of “seed guardians” who are now the stewards of biodiversity, protecting the genetic wealth of the country. Empowering women farmers to manage their own seed enterprises is enabling them to become decision-makers in the community. They are conserving the indigenous seed heritage and preserving heirloom races of crops. Seeds are at the heart of agriculture; and indigenous seeds are hard to come by in a market flooded with genetically modified and hybrid seeds.

By creating the tools, services, and networks they need to break through complex and entrenched poverty and the caprices of climate, women are forging relationships, forming peer learning networks, evolving conflict resolution and problem-solving approaches and building resilient communities.

Nirmiti’s network of women leaders has now been at the forefront of the COVID-10 pandemic response. Rural communities are not untouched by the pandemic – the lockdown has disrupted life and livelihood leaving vulnerable communities facing looming hunger, unemployment and uncertainty.

Nirmiti’s efforts have lifted the local communities. Women who had never stepped out of their homes, who didn’t know anything about the very village they lived in, are today village level leaders and are driving the response to the crisis.

Women self help groups have risen to the extraordinary challenge of COVID-19 (Coronavirus) pandemic. They are meeting shortfalls in masks, sanitizers and protective equipment, running community kitchens, fighting misinformation and even providing banking and financial solutions to far-flung communities. The collective strength of women’s self-help groups (SHGs) has come to the fore.

The women’s movement that started as a leap of faith has proved to be an invaluable resource in these difficult times. The partnership in building social capital among the rural poor has paid off in spades.

Now, more than ever, these women, many of whom escaped poverty through the SHG route and know what it is like to be destitute and poor, are living up to their motto of self-help and solidarity.

For these women and communities, crisis is not new. They have lived through failed crops, unpaid debts and recurring droughts which they have faced almost every single year. Nirmiti’s approach of self-reliance and self-empowerment has helped strengthen the innate resilience of these women and given them the ability to address any challenge that life throws at them.

Shalan has come a long way since she started out. She shepherds a federation of almost 350 self help groups, all of which are actively engaged in a variety of socio-economic activities. Her success story underscores the importance of giving poor people access to loans, savings accounts and other financial services that can help them create businesses and reach their full potential. It’s worth understanding that sheer grit, and a helping hand, can sometimes blaze trails where none seem possible. “It feels so good,” beams Shalan, eyes shining with the glory of achievement. “I really feel like a seasoned business leader.”

Women leaders like Shalan  present us with plenty of hope as they steer their communities through these tenous times.

Anticopyright: Editorials and articles originated on TMS may be freely reprinted, disseminated, translated and used as background material, provided an acknowledgement and link to the source, TMS: A Beacon in India’s Deep Hinterland, is included. Thank you.