Another Pandemic: Sexual Violence during War

19 May 2020 – The COVID-19 pandemic has brought renewed worldwide attention to gender-based and sexual violence. In particular, women with abusive partners face heightened danger during the mandatory lockdowns that bring unanticipated stresses while limiting freedom of movement and access to outside resources.

Although aspects of today’s circumstances are unique, these current perils and challenges serve as reminders of the sexual violence and related traumas that too often also characterize periods of armed conflict, where rape itself is a weapon of war.

I recently had the opportunity to talk with Spanish social psychologist Arancha (Araceli) García del Soto about her work in this context. Arancha has taught and practiced international human rights work related to gender-based violence in places such as West Africa, the Mediterranean, Mexico, Colombia, and Sri Lanka, working with women’s groups and implementing protection and psychosocial projects for the victims of conflict. She has collaborated with the International Criminal Court and the Colombian Truth Commission, and is the former Director of Refugee Initiatives at the University of Pennsylvania’s Solomon Asch Center for Study of Ethnopolitical Conflict (where I first met her 20 years ago). 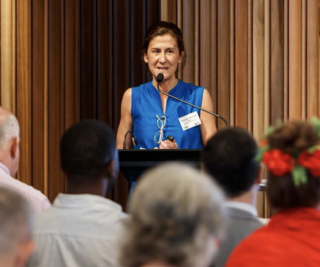 What follows is a transcript of our conversation, edited for length and clarity.

RE: Arancha, thank you for this opportunity. To start, how and when did you first become involved in this area of research and intervention?

AG: My own work related to sexual violence in the context of armed conflict began during the time of the war in the Balkans, almost three decades ago. As you may recall, following the Dayton peace accords in 1995, the phenomenon of rape as a war crime gained enormous international attention. The joint work of lawyers, psychosocial workers, and victims culminated in 2000 with the Tribunal for the Former Yugoslavia in The Hague, and this process set legal precedents for the prosecution of rapists that remain relevant today.

But in many ways, merely recognizing rape as a war crime proved insufficient. So, after years of preparation, in 2015 the Women’s Court in Sarajevo—organized by Women in Black—brought forward what’s been called a “feminist approach to justice.” Using a community approach that gave an active role to the victims in all of the Balkan republics, women publicly shared their experiences of pain—and also their opportunities for resistance and recovery afterwards—around the use of the female body as a battlefield. This was a different kind of tribunal, where the purpose was not to pronounce sentences. Rather, the goal was to prevent silence, impunity, and distortions of history by documenting the testimonies of crimes and violence committed against women. 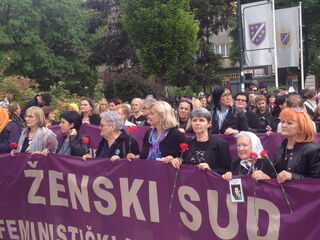 RE: You’ve worked in many different settings. Are there some commonalities that you’ve observed regarding the consequences of sexual violence?

AG: Yes. What we’ve seen is that wherever it occurs—and whether under wartime conditions or not—sexual violence has profound and life-altering physical and psychological consequences for the victims. The list is long and distressing. It includes depression, fear, anxiety, low self-esteem, sexual dysfunctions, unwanted pregnancies, eating problems, obsessive-compulsive disorders, post-traumatic stress disorder, permanent physical dysfunctions, headaches, chronic pelvic pain, miscarriage, AIDS, and suicide. And to be clear, LGBTI groups and heterosexual men are also among the victims.

Beyond these specific repercussions, the personal internal processes after suffering sexual violence are varied and complex—all the more so when social stigma is added to the mix. For example, a sense of fragility often leads to silence and feelings of helplessness, which can be difficult to understand for those who have not lived these experiences. And when the trauma is expressed as fear and avoidance of all reminders of the perpetrators—or when it is viewed as some form of “contamination”—victims are forced to dramatically limit their social roles and their personal life choices, which can paradoxically strengthen the dominance of the aggressor. Ultimately, sexual violence takes a toll on the entire community, weakening communication, strengthening mistrust, and damaging the bonds that hold the social fabric together.

But it should also be emphasized that worldwide many survivors develop remarkable strategies for resilience, especially when they’re able to find meaning in their experiences and reasons to continue living their lives in the best possible ways.

RE: Have you found that survivors of sexual violence during wartime tend to have common goals, and what obstacles do they face?

AG: Even in the best of circumstances, relatively few testimonies are obtained from victims of human rights violations during armed conflict. This is especially true in cases of sexual violence. Moreover, many official reports are written based only on theoretical constructs and recommendations for how things should be, with little direct contact with the victims themselves. The key to increasing the number of personal testimonies is simple: greater access. But that access can only be achieved through building trust and pursuing long-term, sustainable work. Unfortunately, however, many domestic and international agencies—despite the best of intentions—have only brief lead times and stays on the ground, which prevent these necessary conditions from being met.

Also, what we learn from working with groups of women who’ve been victims of sexual violence is that, most fundamentally, they seek to address their basic needs—starting with an end to the violence and with greater personal security. Most of all, they want the economic resources that will enable their family to eat and their children to have an education and the brighter future it can offer them. Yes, they also want justice, but these other needs are often more urgent and therefore take precedence initially.

At the same time, it’s important to recognize that the forms of justice these women seek aren’t necessarily the same as what court systems are designed to pursue. Victims often view their welfare as closely tied to heightened visibility, security, and stability, as well as regaining the personal prestige that was stolen from them by hiding the truth of the attacks. This sometimes includes their professional reintegration and the restoration of feelings of control that are basic to preventing and overcoming trauma. In many cases, then, their demand is that the perpetrators publicly acknowledge their actions and that they also denounce those who are higher up in the chain of command.

RE: Arancha, some of your recent work has focused more on refugee women in the Mediterranean region. Can you say a bit more about that?

AG: Yes, in recent years migrant women—desperate to escape the bloodshed in places like Syria, Afghanistan, Iraq and Iran—have undertaken perilous journeys to reach Greece and other Mediterranean countries. Once they arrive, however, they still face daunting challenges to ensure their safety and to provide meals for their immediate family. Often these women relegate their own personal well-being to the background, and some fall victim to prostitution and trafficking given their vulnerability and limited options for economic survival.

Migrant women associations have developed in response to these circumstances, and I’ve had the opportunity and privilege to witness their work and contribute in whatever ways I can. For example, in Greece there’s the Melissa Network, a cooperative based in Athens funded by former migrant women who continue to welcome more recent arrivals. They organize collectively around a range of activities: legal advice, self and family care, arts therapy, language lessons (English, German and Greek), teen activities, and more. It all develops a sense of community, which helps to generate resistance strategies and direct action for change. It’s also a space that supports already established associations, such as Kweta, the community of Kenyan Women, the Nigerian Women Diaspora, and the Club of Ukrainian Women in Greece.

Another wonderful initiative in the neighboring country of Italy is “Donne migrante e storie di vita,” coordinated by the Association K_Alma. This program focuses on making visible the memories and realities of migrant women by recovering their voices and sharing their life stories. 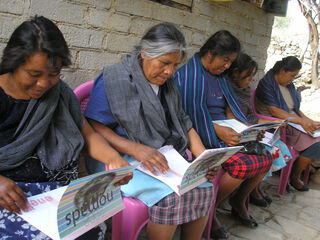 RE: What are some important considerations for mental health professionals and others who want to lend a hand in this work?

AG: The challenges are enormous, but so are the need and the urgency. Broader recognition of the problem certainly helps. But even though we see and hear about the violence and rapes against women in the media, with images and stories that fill us with horror and outrage, guidance on how to prevent or reduce these realities is much less common. Moreover, sensationalizing accounts—including what’s sometimes called the “pornography of suffering”—do a disservice to the everyday victims of war’s brutality. And if we feel numb, or paralyzed by fear, we’re less able to truly and effectively accompany—with dignity—those who have lost control of their lives.

Given the complexity of sexual violence in settings where armed conflict has taken place, strong community approaches—like some of the ones I’ve described—may offer the most promise. In part, this is because working with vulnerable persons—in particular women who have experienced sexual violence—always requires sensitivity to the socio-economic and cultural factors relevant to the specific context. Also essential is the ability to listen without imposing one’s own agenda. That’s often not easy because it depends upon a combination of knowledge and humility—and a willingness to hear muffled voices of protagonists who speak truths that don’t necessarily align with the dominant discourses of powerful interests.

Fortunately, compared to earlier years, within these war-torn communities more and more women—and men—are choosing to stand with the survivors of sexual violence. They know that it’s a long-term commitment, and that the daily struggles continue well after the armed conflict has ended. These supporters accompany with perseverance, lucidity, affection, humor, and a self-critical gaze. And they work in coordination with survivors—avoiding individualism and resisting political pressures in order to influence the public and to realistically face the challenges of peaceful times.

Throughout, those who seek to help with these collective, communal processes must always recognize the voices and demands of the women involved. Their real needs—for basic rights and effective equality—must be placed above the interests of public office holders. And their truth must be a visible and central to all considerations of justice and reparations.

RE: Thank you again, Arancha.

AG: Gracias! Thank you, Roy, it is always so good to have the opportunity to heighten the visibility of these realities and to promote bridges among different initiatives and people with shared goals who work in these challenging areas.

This article originally appeared on Transcend Media Service (TMS) on 25 May 2020.

Anticopyright: Editorials and articles originated on TMS may be freely reprinted, disseminated, translated and used as background material, provided an acknowledgement and link to the source, TMS: Another Pandemic: Sexual Violence during War, is included. Thank you.