Letter from Myanmar: What Comes after Militant Buddhism?

ASIA-UPDATES ON MYANMAR ROHINGYA GENOCIDE, 11 May 2020

The rise of Buddhist nationalism has led to some of the worst inter-faith violence the country has ever seen. But some monks are leading the charge against the most intolerant preachers. 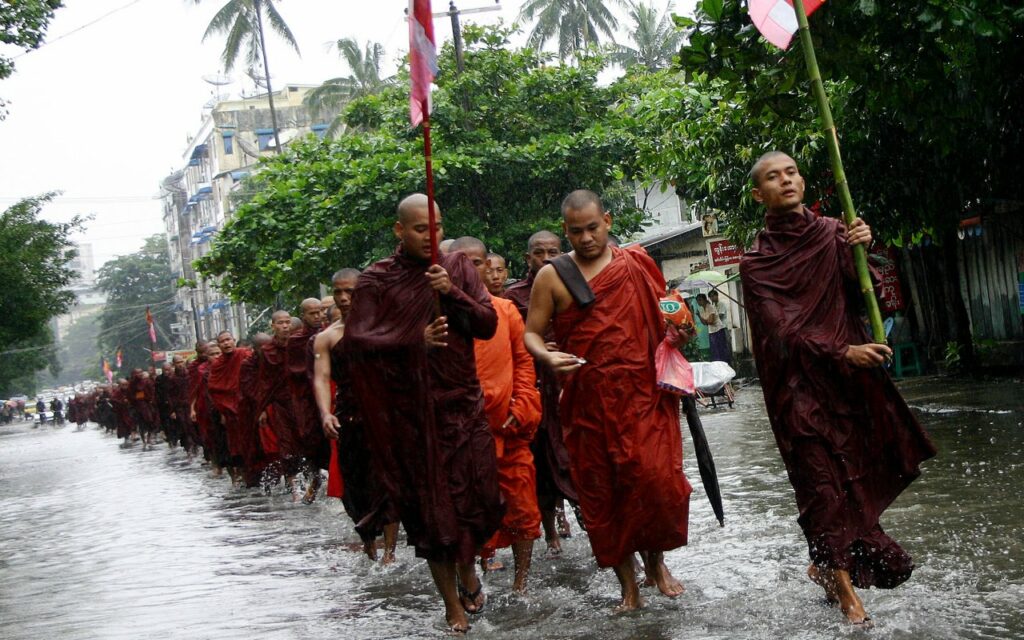 6 May 2020 – January is the cool, dry season of traveling sermons in Myanmar, where members of the country’s vast monkhood disperse to preach outside their home constituencies. In Yangon, a neighborhood Buddhist association had invited the monk Ashin Issariya to visit from the Myanmar’s south-east, so he came, lodging humbly with a family in a storeroom above their pharmacy in Hlaing Tharyar, a gritty, industrial township across the river from the city centre.

The unassuming monk, wearing the traditional one-shouldered maroon robe, arrived at his sermon on a Sunday night to a hero’s welcome. More than a thousand people streamed in to hear him speak as he took his place on a raised platform, framed by fluorescent, neon-green petals like a peacock’s feathers.

“No one in Myanmar reads,” he told the crowd, with serene authority. “Our country is the lowest-reading country. What’s the point of being a majority-Buddhist country if people are ignorant, greedy, cheating and angry?”

His listeners murmured in assent.

“I tried to see changes in this country, so I risked my life,” he told them. “I was not afraid to tell someone that they were wrong. I pointed out the wrongs of [Myanmar’s Commander-in-Chief] General Min Aung Hlaing. I sacrificed my life for the Dhamma [the teachings of the Buddha].” He paused. “But since most people here dare not point out the wrongs of others, the country still has much Adhamma, and unlawfulness.”

For Issariya, an activist monk formerly known as “King Zero”, Buddhism is not merely about personal identity, rituals, or even community, all of which are foregrounded in Myanmar’s Theravada Buddhist tradition. It is also a call to political action. Issariya was a leader of the 2007 Saffron Revolution, named for the robes of the monks and nuns who spearheaded vast pro-democracy demonstrations against the military junta that had ruled since 1962.

After the Revolution, Issariya had to evade a two-week manhunt and escaped across the border to Thailand. Only four years ago did he finally return to a nominally democratic Myanmar, by which time his fight against Adhamma had acquired a new target: militant Buddhist nationalism. This is the ideology that has fueled both the general anti-Muslim communal tensions of recent years and the ethnic cleansing of the Rohingya Muslim minority in Rakhine State. At the end of January, the International Court of Justice rebuked Myanmar by ordering the country to “take all measures within its power” to prevent genocidal acts against the “extremely vulnerable” Rohingya.

“If I had been born in a developed country like America, I wouldn’t have to care about these things, I could just focus on meditation,” joked Issariya, when I met him the day after his sermon above the pharmacy, where he was sleeping on a mattress. The 45-year-old has a shaved bald head and thick eyebrows. He tends to close his eyes while he metes out sentences. Buddhists in most other countries are lucky, he said, because no violence is conducted in the name of their religion. “But here, we will have to remain involved in politics as long as the country still needs our help.”

Issariya and a small number of likeminded monks – about 100, according to UK-based Rohingya rights activist Maung Zarni – are confronting militant Buddhism from within the sangha, the country’s vast class of monks and clerics. Myanmar’s population of 54.3 million is about 88 per cent Buddhist. Today’s wave of Buddhist nationalism has a somewhat recent vintage and started in earnest in 2012, escalating quickly from a boycott of Muslim businesses to laws limiting the rights of non-Buddhists that were passed by Myanmar’s parliament in 2014 and 2015.

Buddhist nationalism provided the ideological support for the Rohingya genocide, a vicious campaign marked by killings, rapes and the forced relocation of nearly one million Muslim refugees into Bangladesh, creating the largest refugee camp in the world.

The rhetoric of Buddhist nationalism, which is disseminated by groups such as the MaBaTha (the Organisation for the Protection of Race and Religion) and charismatic figures like Ashin Wirathu, the monk who Time magazine dubbed the “face of Buddhist terror”, argues that Myanmar is a Buddhist nation-state whose majority is threatened by its Muslim minorities.

Issariya leads the “Anti-Adhamma Committee,” which counts many former Saffron revolutionaries among its numbers. They preach against intolerance and conduct modest interfaith outreach initiatives. “The Saffron Revolution alumni are the most important elements of change within the Buddhist establishment,” said Thet Swe Win, a secular Burmese activist who works with Issariya.

These progressive monks remain a tiny minority in a country where up to half of all Buddhist men have at some point been a monk, and their task is to counter nearly a decade’s worth of propaganda by militant monks such as Ashin Nyanissara, who once remarked at the height of the Rohingya exodus that: “Muslims have almost bought the United Nations.”

But Issariya’s efforts got a felicitous boost last year when Wirathu was charged with sedition and forced underground, leaving the movement without its most charismatic spokesperson.

“I don’t believe that the propagation of [nationalist groups like] Ma Ba Tha is truly as successful as we are made to think,” said Issariya. “Many people followed along because it was wrapped up in the package of protecting the Buddhist religion and Buddhist pride, but I don’t think they support hatred or ethnic cleansing.”

“Buddhists are in the strongest position to confront the modern Burmese state, [State Counsellor] Aung San Suu Kyi, and Islamophobia,” said Maung Zarni, a UK-based Rohingya rights activist. “Their religious identity is a form of protection. Whereas actual Muslims tend to keep their head low, because they are terrified.”

Issariya was born in Yangon’s Kungyangone Township in 1974 and attended formal school only until he was around 13 years old, when his education was disrupted by the 1988 pro-democracy uprising. His parents encouraged him to follow the monastic path and he found much to love in its rigour and community, and its actionable conception of Buddhist “loving-kindness”.

“It was never about retreating into yourself or even into the monkhood,” he said. “There was a big library and our teachers encouraged us to read and discuss current affairs freely.” On Sundays, when classes were off, they crowded around radios to listen to the speeches of Aung San Suu Kyi, then under house arrest as the world’s most famous prisoner of conscience, as well as English news reports from the BBC and Voice of America: rare missives from the outside world in a country that had little in the way of a public sphere.

Due to this youthful exposure and his own background as a pro-democracy activist, Issariya continues to support Suu Kyi, even though the international community accuses her of being indifferent to the persecution of Rohingya. Like most Burmese, Issariya still sees her as the mother of their nation. Whereas external observers increasingly see militant monks, a ruthless army and a heartless Suu Kyi as part of one big complex, members of the Sangha try to compartmentalise.

It remains to be seen if their selective rhetoric is more effective, but it’s one of the only ways of being able to critique Myanmarese institutions, which tend to double down under outside pressure. The month that we met in Yangon, billboards everywhere announced “We stand with you” to Suu Kyi, as the ICJ deliberated over the Rohingya’s plight. But if Issariya remains soft on Suu Kyi, he does exercise his rare capital to criticise hateful monks.

“Lay people would face charges if they said the things that I do,” said Issariya. Monks and nuns are a revered and protected class in Myanmar; ordinary people cannot speak to them without a cavalcade of honorifics. Issariya’s Anti-Adhamma Committee and Ma Ba Tha are fighting, monk-to-monk, on deeply religious terms over nothing less than who was the Gautama Buddha: a “nationalist who defended his ‘race’ and religion” or an exemplar of “right speech” and nonviolence.

Today, Issariya lives in the monastery that he started in Hpa-An Township in Kayin State, near the Thai border, but he travels constantly to preach around the country, pointing to a growing demand for his ideas.

He collaborates with other monks and lay activists. Among the former is the well-known, Mandalay-based progressive monk Sayadaw Badata Seindita. Last year, he spearheaded the “White Rose” solidarity campaign with Muslims after a spate of communal violence in Yangon, in which he and several other activists handed out flowers to congregants at the Bahadur Shah Dargah, the mosque set up around the burial place of the last Mughal king.

Opposition to the new Buddhist nationalism in Myanmar has only developed since spring 2014, according to Matthew Walton, one of the leading scholars of Burmese Buddhism. Critics of Wirathu like Issariya have been branded as traitors, forced to defend themselves publicly, and have received death threats. But according to Maung Zarni, “Monks have a degree of protection, so I don’t think they will actually go to jail anytime soon.”

“They may not confront racism like a secular activist would do, but no one can accuse a Buddhist monk of spreading Western ideology,” said Zarni. Within the vast Theravada Buddhist corpus, there are “numerous values and historical examples that can promote religious pluralism, discourage hate speech, and encourage a more critical approach to rumors and misinformation,” wrote Walton and analyst Susan Hayward.

“I myself am not religious, but nothing in our society will get done without the support of monks,” said Thet Swe Win, the interfaith activist, who is also part of the White Rose Campaign. It helps that Issariya is comfortable with public engagement and is, like most Burmese, an enthusiastic adopter of Facebook.

Of course, progressive rhetoric or even further arrests of Buddhist nationalists like Wirathu are not in themselves sufficient to counter deep-seated intolerance; nothing will likely change unless the Suu Kyi’s government creates policies to integrate the country’s 135 ethnicities and figure out an actionable solution for the Rohingya. But the last major round of anti-Muslim legislation emerged directly from the activism of monks. Perhaps its counterpart will follow the same trajectory.

As Issariya insisted in his sermon, Buddhism is political: “The Buddha’s teachings are not just sayings, but a raft to cross the river and reach the other side” — a concrete starting point for solutions to manmade problems.

Reporting for this article was supported by the USC Center for Religion and Civic Culture, the John Templeton Foundation and Templeton Religion Trust.

One Response to “Letter from Myanmar: What Comes after Militant Buddhism?”