The Horrible Costs of a Fake Word

The world has literally ‘lost it’ over the horrible word capitalism.

This may seem like an overstatement, but it can be justified easily. All it needs is some clear thinking based on a few words which – unlike capitalism – are rooted in reality.

First of all, any ‘-ism’ cannot be trusted blindly because – over time – it becomes a hindrance to individual growth. Anyone promoting or even naively adopting an ‘-ism’ is likely living or hiding ‘in a box’, which state blocks his or her individual progress.

Simple question: In a society where the basic vocabulary stunts individual progress, can we EVER expect overall well-being?  Can one get nectar out of bird feathers?

It is only when we discard ALL ‘-isms’ – including the ever-so-venerable Buddhism! – that we are forced to go back to basics, to reality, and in particular to the reality of suffering. Nothing else is then left to build a world view that makes sense. A new day dawns!

The origin of the word capital lies in the Roman word caput, meaning ‘head’. Clearly the word ‘head’ is not to be taken literally in capital; here it means ‘at the head’ or ‘important’.

The surplus produce of a society is real, tangible and important. It helps a society in tiding over difficult times and in building a better future. Inevitably, good times and bad times come and go. People work hard and produce a surplus – and it is in perfectly natural order if the surplus helps a society through difficult times. If a farmer stores the surplus grain from a good season, he or she is a sensible person – not a contemptible ‘capitalist’.

So what is the dividing line between a sensible farmer and a contemptible ‘capitalist’?

Surplus wealth came to be dubbed capital as it was increasingly appropriated away from the community – and into the hands of a few self-styled ‘elites’. Quite possibly the use of this word facilitated the sleight of hand involved in the appropriation. The surplus wealth was thereby deemed ‘too important’ to be in the hands of the many who produced it.

From this reasoning, it follows that any use of the word capital implicitly acknowledges the reality and the inevitability of the appropriation – and the consequent division of society.

Knowingly or unknowingly, capitalism as an ideology was developed to justify and sanctify the appropriation and the division; to provide a veneer of respectability to that process; to impose on society a mindset which sees the ideology as being somehow good for society.

In a capital-brainwashed society, over time, any person’s worth begins to be measured only in terms of the size of his or her ‘capital’ or ‘stored hoard’.

A human being has a mix of different qualities – kindness, wisdom, courage, strength, intelligence, honesty, tact, or the opposites of these. But if we focus only on a person’s hoard of stored value, nothing else matters. We wear blinkers – blinding us to so much richness!

We then view life with this single and false standard of ‘human excellence’! Our understanding and appreciation of life reduces to a single dimension – that of ‘stored hoard’. Knowledge, art, culture, education, democracy – all that is only for show, a veneer.

Suppose we hear that a person has fifty trunks full of jewellery, for example, or ten billion dollars of ‘net worth’. Then it matters not a whit whether the person is kind or unkind, wise or unwise, tactful or tactless … and so on. Naturally, it also does not matter any longer how the capital is acquired. Is it acquired through crime, fraud, pillage, war, patricide or genocide?

That does not matter in the least to fervent devotees of Mammon.

Untold number of persons, families and communities possess other excellent talents or qualities. Say skill in agriculture, animal husbandry, music, art, craft, poetry … and so on. But when who cares for all that when the almighty Mammon calls?

By giving overwhelming importance only to the hoard of stored value, we miss out on the vitality – the spirit and the joy of life! – generated by all other human values and talents. We pay a huge opportunity cost for that error, which leads eventually to breakup of society.

Indeed, this is already happening in one rather prominent society. 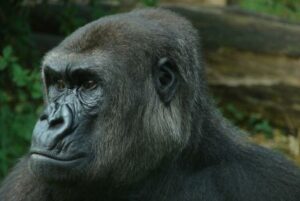 Why the photograph? The ‘HEAD’ gorilla – caput again! – in a band is prone to chest-thumping as a show of power. Likewise, in human societies, the size of a stored hoard also moves its owner to chest-thumping of a kind – done in socially acclaimed ways, of course!

Worship of Mammon, in one form or another, set in well over five thousand years ago. After that, the next downward stage in alleged ‘human development’ was inevitable.

A whole new class of humans emerged, who claimed to be custodians or managers of capital.  They called themselves kings, priests, ministers, treasurers, bankers, advisors, lawyers, fixers, managers … whatever. Instead of working to produce something real, they opted to discover more and more techniques to appropriate the surplus produce of a society.

A huge new profession emerged – the manipulation of ‘wealth’, the capital which arises from surplus produce. The well-being of producers is not the concern of this profession.

The Italian word capo, as made famous in the phrase capo di tutti capi, also derives from the same Latin word caput. As our good friend Antonio C.S. Rosa likes to put it: ‘Capitalism is no different from gangsterism’. We now see that etymology supports his point strongly!

Today the global economic system is quite literally awash in ‘capital’ worth trillions upon trillions of dollars. However, apart from a very few alleged islands of bliss, human life in the rest of the world is full of hardship and anxiety. ‘Capital’ is not coming to our help when we need it the most. By what twisted norms of economics can this situation be justified?

The reality of the word capitalism – as this ideology is being promoted today – is ugly but simple. It is GREED – or the worship of Mammon – in a newer disguise.

Acknowledgement: One of the crucial steps in the reasoning set out here has been inspired by the writings of Simone Weil [1909–1943].

Anticopyright: Editorials and articles originated on TMS may be freely reprinted, disseminated, translated and used as background material, provided an acknowledgement and link to the source, TMS: The Horrible Costs of a Fake Word, is included. Thank you.

2 Responses to “The Horrible Costs of a Fake Word”