Trump Having 2nd Thoughts on Guaidó, Would Meet Maduro: Axios

The comments made on Friday [19 Jun] to Axios, if were to be implemented, would mark a new chapter in the relations of both nations. 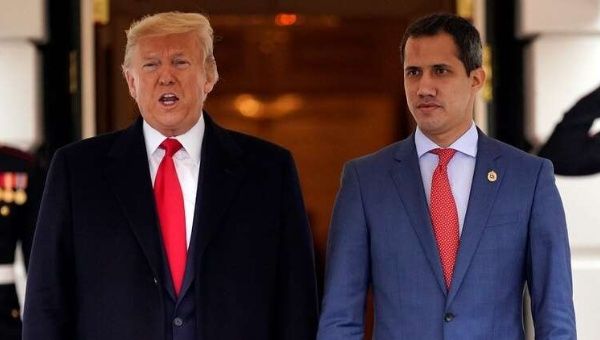 On Jan. 23, 2019, with the attempted coup made by Guaido, the opposition lawmaker, self-proclaimed as the “interim president” of the country, violating the constitution. | Photo: AFP

Asked whether he would meet with Maduro, Trump said that he “would maybe think about that. … Maduro would like to meet. And I’m never opposed to meetings — you know, rarely opposed to meetings,” adding that “you lose very little with meetings.”

The comments made on Friday to Axios, if were to be implemented, would mark a new chapter in the relations of both nations, as the interview also revealed that Trump is having second thoughts on their go-to man, Juan Guaido.

Asked whether he regretted his decision to follow his former national security adviser John Bolton’s advice on Guaido, Trump initially said “not particularly,” but then went on to say, “I could have lived with it or without it, but I was very firmly against what’s going on in Venezuela.”

Since 2017, the Maduro administration has tried to reach Trump but the U.S. head of state has turned them down, opting for a violent foreign policy through the application of unilateral and illegal sanctions that have crippled the Latin American nation’s economy.

This also comes as Bolton’s new book, ‘The Room Where It Happened,’ also reveals Trump’s real feelings about the lawmaker.

“He thought Guaido was ‘weak,’ as opposed to Maduro, who was ‘strong,’” the book reads, adding that “by spring, Trump was calling Guaido the ‘Beto O’Rourke of Venezuela,’ hardly the sort of compliment an ally of the United States should expect.”

On Jan. 23, 2019,  with an attempted coup made by Guaido, the opposition lawmaker, self-proclaimed as the “interim president” of the country, violating the constitution. Soon after, Trump recognized him, and the same was done by the Secretary-General of the Organization of American States (OAS), Luis Almagro, and right-wing governments in the region.

But after more than a year, Guaido has proven more of a problem for the U.S.’s attempts to oust Maduro and his government. The lawmaker has been involved with money laundering plots, international corruption scandals, ties with narco-paramilitary groups, and even a recent foiled attempt to start a coup led by U.S. mercenaries.