11 Jun 2020 – This is the 14th edition of the Global Peace Index (GPI), which ranks 163 independent states and territories according to their level of peacefulness. Produced by the Institute for Economics and Peace (IEP), the GPI is the world’s leading measure of global peacefulness. This report presents the most comprehensive datadriven analysis to-date on trends in peace, its economic value, and how to develop peaceful societies.

The GPI covers 99.7 per cent of the world’s population, using 23 qualitative and quantitative indicators from highly respected sources, and measures the state of peace across three domains: the level of Societal Safety and Security; the extent of Ongoing Domestic and International Conflict; and the degree of Militarisation.

In addition to presenting the findings from the 2020 GPI, this year’s report includes an analysis of the effect of the COVID-19 pandemic on peace, including Positive Peace: the attitudes, institutions and structures that create and sustain peaceful societies. It examines how the impact of the pandemic, and in particular its economic consequences will increase the risk of severe deteriorations in Positive Peace over the next few years, and also examines which countries are best placed to recover from the shock.

The results this year show that the level of global peacefulness deteriorated, with the average country score falling by 0.34 per cent. This is the ninth deterioration in peacefulness in the last twelve years, with 81 countries improving, and 80 recording deteriorations over the past year. The 2020 GPI reveals a world in which the conflicts and crises that emerged in the past decade have begun to abate, only to be replaced with a new wave of tension and uncertainty as a result of the COVID-19 pandemic. 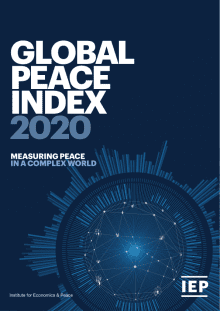 Iceland remains the most peaceful country in the world, a position it has held since 2008. It is joined at the top of the index by New Zealand, Austria, Portugal, and Denmark.

Afghanistan is the least peaceful country in the world for the second year in a row, followed by Syria, Iraq, South Sudan and Yemen. All, except Yemen, have been ranked amongst the five least peaceful since at least 2015.

Peacefulness has declined 2.5 percent since 2008 with 81 GPI countries recording a deterioration, and 79 improving. Fifteen of the 23 GPI indicators are less peaceful on average in 2020 when compared to 2008.

Two of the three GPI domains deteriorated over the past decade, with Ongoing Conflict deteriorating by 6.8 per cent and Safety and Security deteriorating by 3.3 per cent. Terrorism and internal conflict have been the biggest contributors to the global deterioration in peacefulness. Ninety-seven countries recorded increased terrorist activity, while only 43 had lower levels of terrorism. However, after peaking in 2014 during the height of the Syrian civil war, total deaths from terrorism have fallen every year for the last five years.

By contrast, the Militarisation domain has recorded a 4.4 per cent improvement since 2008. The number of armed services personnel per 100,000 people has fallen in 113 countries, and military expenditure as a percentage of GDP fell in 100.

This year’s report also looks at the trends in civil unrest over the past decade. It finds that there has been a sharp increase in civil unrest events since 2011, with over 96 countries experiencing at least one violent demonstration in 2019. From 2011 to 2019, the number of riots rose by 282 per cent and general strikes rose by 821 per cent.

One Response to “Global Peace Index 2020”