Buddha was a “soft” social revolutionary.  In founding the sangha – a kibbutz-like community of wisdom seekers – he set an example for the transformation of Indian culture.  The word Buddha means Awake.  The sangha spread and multiplied.  India became in fact a more enlightened – a more peaceful and egalitarian – being-in-the-world-with-others.  Thanks to Emperor Ashoka, circa 250 BCE, India’s metamorphosis into a Dharma nation showed that peace is possible, and so is the welfare of all.  This experiment was never wholly successful, of course; but for the first thousand years of the Common Era, it was planted in the fructifying soil of virtue and shared prosperity, and India’s monastic universities were the greatest gardens of learning the world had ever seen.

Now, there are indeed vast differences between Buddhism and Marxism, but this does not exclude important points of overlap.  One such point is Buddha’s Declaration of Human Rights, which, gleaned from multiple sutras, asserts that all people have a five-fold right to… food, shelter, clothing, medicine, and community.  This ideal can only be actualized on a foundation of perpetual peace and cooperation, in a spirit of universal-brother-sisterhood conjoined to humility and creative opportunity.  In which case, Marx’s dictum applies … “To each according to their needs, from each according to their capacity.” 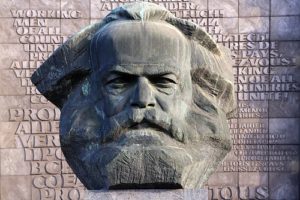 This agapic vision of a peaceable kingdom on earth includes reverence for Gaia; thinking globally, acting locally; sustaining a healthy biosphere with gratitude for harvest, care for beauty, and a holistic devotion to the well-being of all future generations.  Marx developed his notion of “species consciousness” in order to encourage a shared commitment to animal rights and a clean environment.  His endeavor echoes Pythagoras, Lao Tzu, and Buddha, three of the world’s first ecological sages.

“It takes a village to raise a child.”  This Buddhist/Ubuntu/Socialist vision is manifest when a society abandons greed (the first of what Buddhism calls “the three poisons”) and devotes itself instead to The Enlightenment Project, embodied in free lifelong educational opportunity for all.  Such a society is free from scarcity, oppression, deception, and alienation; humanity having returned to its roots in The Life Force that grew us in the womb – the magical mystery tour of interbeing.

Anticopyright: Editorials and articles originated on TMS may be freely reprinted, disseminated, translated and used as background material, provided an acknowledgement and link to the source, TMS: A Buddhist Socialist Peaceable Kingdom, is included. Thank you.