Back to the Drawing Board: Beirut Has Been Bombed to the Ground. Now What?

17 Aug 2020 – “Work is love made visible”. These words were once penned by the Lebanese American writer, poet, and artist Khalil Gibran. Born in a Lebanon that was then part of the Ottoman Empire, Gibran left the country in the same way that so many Lebanese wish to do it today.

On the evening of August 4, 2020, two catastrophic explosions occurred at the Port or Beirut devastating the already vulnerable capital and pushing the Lebanese people into further despair. The blast, which involved the detonation of 2,750 tons of ammonium nitrate, is believed to have been facilitated by the negligence of the Lebanese authorities. Along with the COVID pandemic, a refugee crisis, political crisis, and an economic and currency collapse, the explosion has considerably intensified the palpable unease the country has been experiencing.  Deteriorating living conditions and government corruption ignited a series of mass protests that have been flourishing intermittently throughout the country since October 2019 as grievance continues to pile.

The detonation killed at least 160 and injured over 4000 people, destroying over half of Beirut in the process. Winter approaches and the resulting destruction has displaced over 300,000 people, 100,000 of which are children. Over a quarter of Beirut’s population has been left destitute and the Lebanese government, which is complicit in perpetuating many of the country’s long-lasting problems, has failed to respond to the immediate needs of the people in the aftermath of the disaster.

At the time this article was written, many factors pertaining to the exact cause of the explosion remain unclear. What is clear, however, is that the disaster has added to the work that must be done.

Home to a society that is deeply divided along sectarian and socio-economic lines, chaos is nothing new to the country. In 1975, tensions between the various communities erupted in a civil war that would go on to last 15 years, formally coming to an end in 1990 with the signing of the confessional power sharing agreement known as the Ta’if Accord.

While the Ta’if agreement marked the end of the civil war, it constitutionalized sectarian division. The Lebanese political system is defined as a democratic republic within a confessional framework. Confessionalism implies division along sectarian lines. It is a form of institutionalized power sharing that aims to maintain stability by regulating ethnic conflict. This current power sharing approach aims to move away from conflict, as opposed to moving towards peace, and this is problematic. 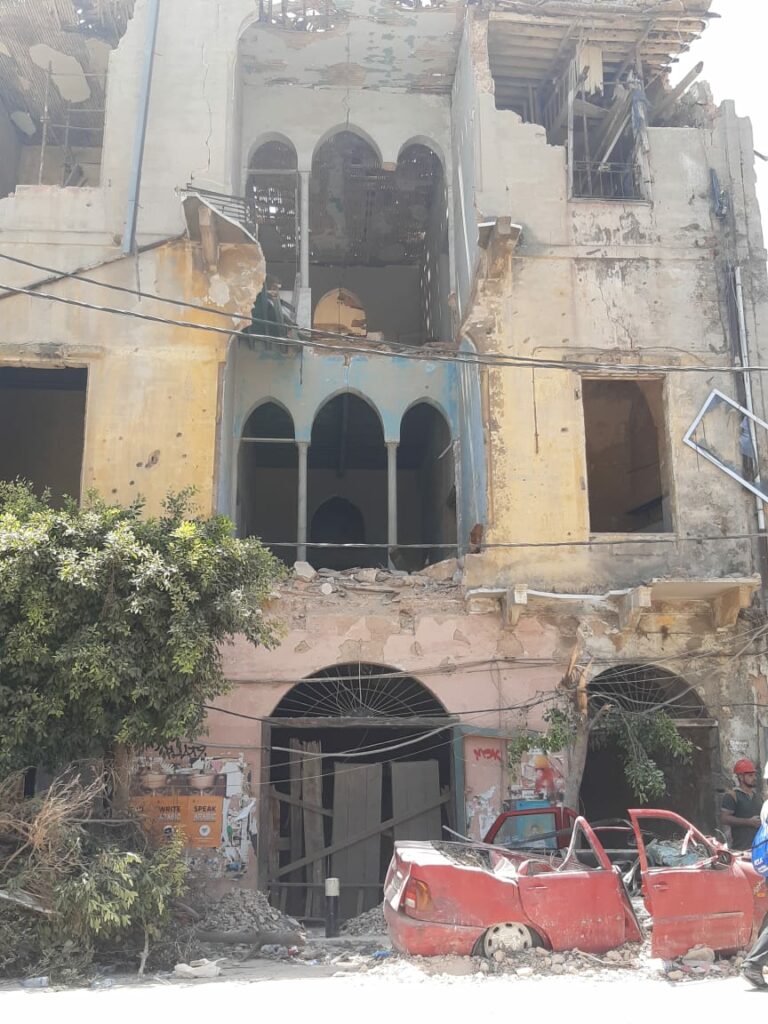 Lebanon as a nation and as a government has never functioned in a healthy way and the current system has proven itself a travesty of governance. Embedded in Lebanon’s system is what Galtung, the father of the field Peace Studies, calls structural violence. The current arrangement has failed to ensure the best interests of the Lebanese people and it is neither conducive to peace nor development.

While sectarian strife in the country runs deep, it is not enough to say that the conflict is religious in nature. It may appear as such at the surface level, but there is a deeper dynamic at play.  At best, religion can act as a guideline for values and serves as but one aspect of an individual’s identity. Beyond the surface, conflict in Lebanon is something that has become engrained in culture and identity- concepts that are abstract and poorly understood. Conflict in Lebanon embodies what Galtung refers to as Cultural Violence; the tendency to utilize aspects of culture to legitimize and justify direct and structural violence.

In addition to destroying Beirut, the explosion dealt the final blow to the Lebanese government. The government resigned on August 10, 6 days after the explosion. Walking through the now dilapidated streets of Lebanon’s capital, I feel the endless life path potentials. We are now in a unique position as a collective: we can choose to cooperate and coordinate and decide collectively on the country that we want to build for ourselves. We must do our part of the work and agree on common values which will serve as the foundation for our new Lebanon. The original foundations were unsteady from the beginning. When you build on weak foundations, the entire structure tumbles down with the slightest wind. Now it has all been leveled to the ground. Back to the drawing board we go.

To remedy the societal conflicts that have facilitated political ineptness, we must be willing to go through the often-painful process of looking at the violence inherent within our own culture and in-groups. We mut be willing to see ourselves as potentially ‘bad’ and make conflict resolution more important than ‘being right’. Change is needed at both the individual and collective level. If we are to move forward so much as an inch, we must address the unhealed pain of the past. The reality is that reconciliation and post conflict healing never fully occurred, and this has caused incredible developmental delays in the country.

We have been sweeping decades of trauma under the floorboards and that is why it keep bursting forth, in both conscious and unconscious ways. We have become very good at dissociating; it is our coping mechanism of choice in fact. Healing a fragmented society means becoming more conscious. This involves coming face to face with the ways that we are disconnected from each other. The various communities and political factions live in separate perception bubbles, we live in parallel realities. Healing requires the integration of the various fragments that make up the whole and to do this we must be willing to truly see, hear, and feel one other. Our ability to cause harm to people is in direct relation to our degree of disconnection from them.

The opposite of disconnection is connection, and this is where we should direct our aim. It helps to understand that beneath prejudice is always the perception of threat. Peel it back one layer further and behind the ‘perception of threat’ is vulnerability, without exception. To establish a lasting peace, we need to include everyone at the table. Failing to do this has generated dire consequences in the past. So long as separate communities exist, they all deserve to feel safe and represented. There is a lot of room for creativity and Lebanon needs something completely new–leaders with blood on their hands will not do if pulling the plug on the perpetual conflict is what we desire.

Nonetheless, as much as we would like to, there are certain things that we simply cannot scrap overnight. Religion is one of these things. It is a major part of identity and while it is declining rapidly, it is still there. Instead of resisting it and asking people to rid themselves of their identities, we can find ways to give it room to express itself in the healthiest possible way. Change does not have to mean erasure.

Our reconstruction presents some crucial questions: what do we want to create in place of the old system? What parts do we like and want to keep? Which parts do we want to change? What does a system that have the best interests of all communities at heart look like? How might a Lebanon with leaders who value radical compassion and empathy do things differently? Compassion and empathy are excellent universal values on which to build strong foundations of governance and unity.

We can no longer afford to be aimless. People are angry and the energy is overflowing–it must be directed effectively. Ask yourself this:

“What does the Lebanon I want to live in look like?”

It has always started in the mind, first as a thought, and then as reality.  Can you see how our thoughts created the current reality up until now? This reality of us vs. them? These zero-sum games we have played up till now, they do not work. When was the last time someone stopped believing something because you told them that what they believe is wrong and bad? Probably never. Zero-sum games do not work.

As individuals, we have immense power and choosing solving conflicts in our day-to-day lives will translate to systemic change. According to researchers from the University of Pennsylvania and the University of London, you only need 25% of people to be on board with something for it to generate effective and lasting change and gain traction. In other words, there is hope for the creation of a peaceful and innovative Lebanon. Just 3/10 people need to want it. What are we waiting for?

Inherent within us is the power to re-create and re-mold our own societies at any time. We must cease to weaponize the past as it is only of value when it helps us to better understand the present, to remedy and facilitate healing. The lives of so many have been irreparable shattered by the series of crises we have been experiencing, and our suffering, have created a climate that is ripe for transformation.

After the explosion, I decided to volunteer in the civilian-led cleaning efforts in Beirut, sweeping rubble off the streets and out of damaged buildings. I was not the only one- hundreds (and later thousands) had felt inclined to do the same. On the streets of a devastated Beirut, the people–mostly youth–showed up, armed with their shovels and their brooms and their love for a fallen country and it renewed the hope I thought I had lost. The people showed up for Beirut and for each other. 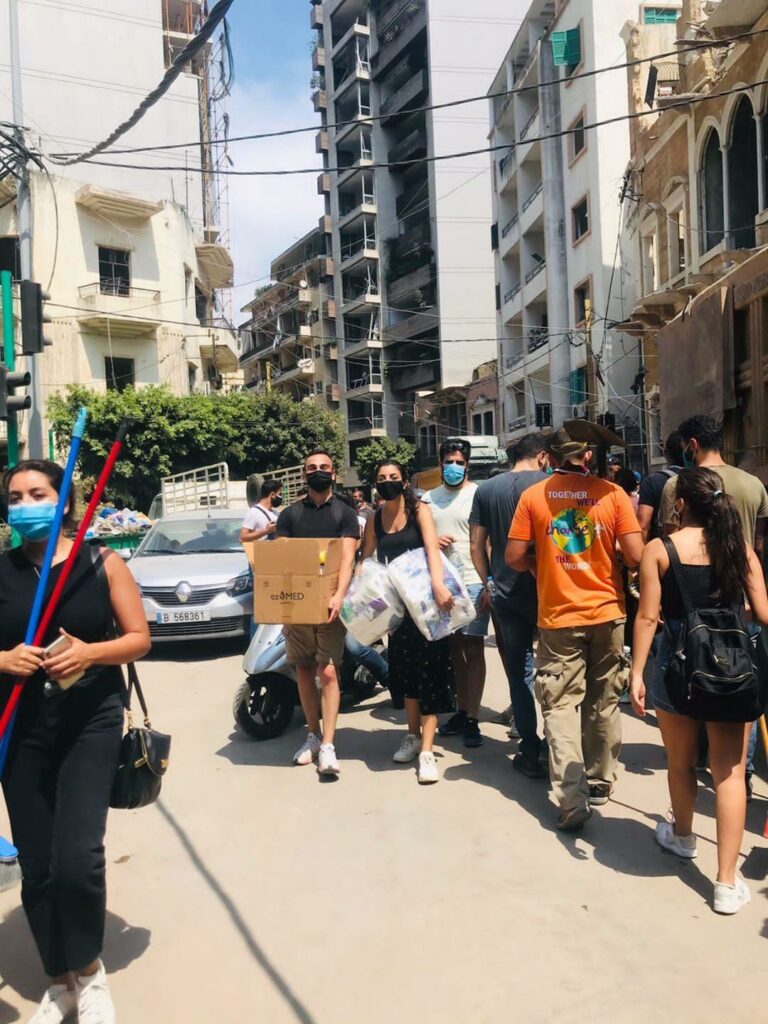 Amanda Haydar is Lebanese Canadian and has a degree in International Peace Studies from Trinity College Dublin. She is an IYPF-Young Ambassador for Peace and the founder of the ‘Let’s Talk Peace!’ podcast.  She enjoys documenting the connections between human behavior and development through her work and is a full-time optimist. Email: acrord32_sbx

Anticopyright: Editorials and articles originated on TMS may be freely reprinted, disseminated, translated and used as background material, provided an acknowledgement and link to the source, TMS: Back to the Drawing Board: Beirut Has Been Bombed to the Ground. Now What?, is included. Thank you.