Conscience in Revolt: Sophie Scholl on Suffering, Strength, and the Deepest Wellspring of Courage

“Sympathy is often difficult and soon becomes hollow if one feels no pain oneself.”

“To be a human being among people and to remain one forever, no matter in what circumstances, not to grow despondent and not to lose heart — that’s what life is all about, that’s its task,” the young Fyodor Dostoyevsky wrote in an existential exhale of a letter to his brother hours after his death sentence was repealed; in 1849, still in his twenties, Dostoyevsky had been arrested and sentenced to death for belonging to a literary society that circulated books the tsarist regime deemed dangerous.

Dostoyevsky lived to give us some of the most beautiful and humanistic literature our species has produced — literature laced with admonitions against indulging those murderous impulses of human nature, with invitations to choose again and again not to lose heart, not to lose faith in the human capacity for goodness.

A century later, amid a world that had failed to take Dostoyevsky’s heed, a person even younger took upon her slight shoulders that eternal task in one of the most powerful acts of resistance in the history of our civilization — powerful both for its courage and for its tragedy, outlining both what we are capable of as a human beings and how far we have yet to go to reach our highest potential as a humane society.

Born in a small German town as one of the local mayor’s five children, Sophie Scholl (May 9, 1921–February 22, 1943) was barely out of her teens when her conscience burst awake to the unconscionable inhumanity that had wormed her country’s soul. A month after she began her university studies in biology and philosophy in the nation’s capital, she co-founded the White Rose — a non-violent resistance group of students, artists, and scientists devoted to inspiring their compatriots to take a clear stance against Hitler, “to strive for the renewal of the mortally wounded German spirit,” as they impelled in one of their pamphlets. 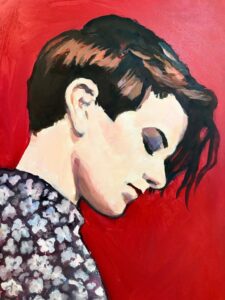 On February 18, 1943 — eight months after the group’s founding — Scholl, her brother, and four other members of the White Rose were arrested, convicted of high treason for distributing anti-war pamphlets, and sentenced to death by the so-called People’s Court.

She was executed four days later.

Scholl is one of sixty-four heroes of resistance to Nazism profiled in Conscience in Revolt (public library) through brief biographies and a selection of their surviving writings that radiate the uncommon courage of living one’s values to the hilt — a 1957 out-of-print treasure that came into my life via one of those rare, improbable wonders that every once in a while reward those of us who mine the forgotten for the timeless: Tucked into my antiquarian copy of another our-of-print book on nonviolence, I discovered a newspaper clipping of a review by an English archbishop and anti-apartheid activist, lauding Conscience in Revolt as “a most moving and challenging pesentation of resistance to tyranny as a personal, individual, intensely human thing.” (Lest we forget, all of our pursuit and defense of truth springs from such a place, as astrophysicist Janna Levin reminds us in her beautiful reflection on science as a personal, “truly human endeavor.”) “It is precisely this we need to be reminded of now and always,” Father Huddleston writes in his review, “for there is no form of escapism more subtle or more general than the use of abstractions. And… there is no more certain way of losing the fight for human dignity and peace than the refusal to believe in the infinite value of the individual.” 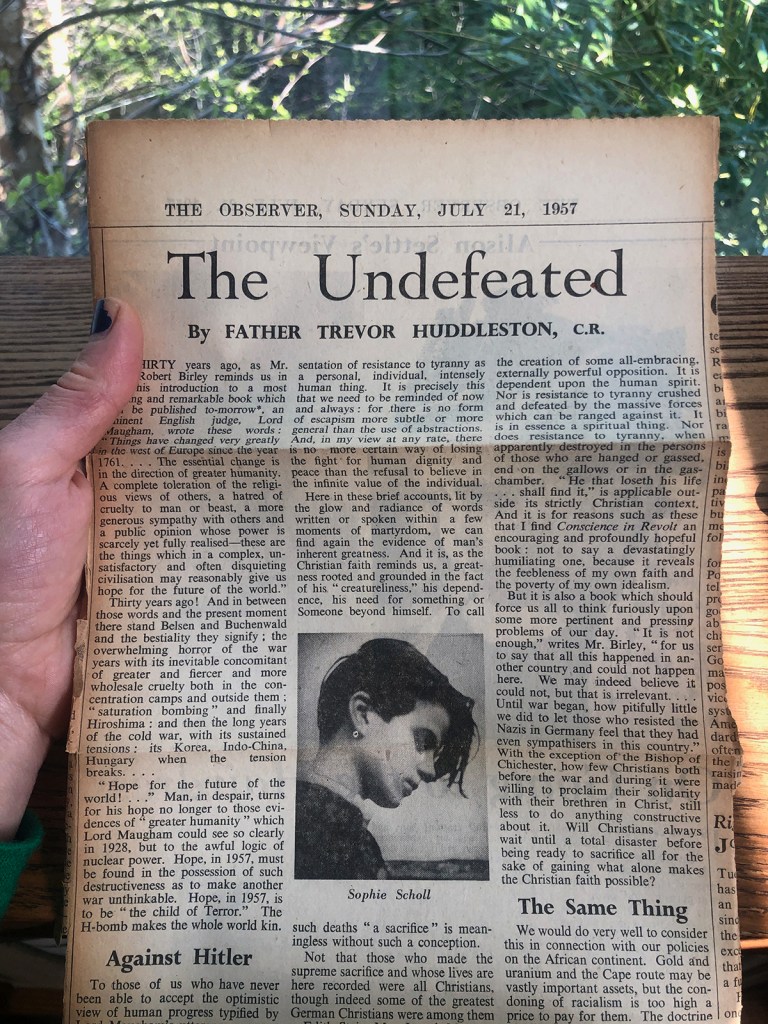 The deeply personal nature of Scholl’s resistance and its seedbed in her singular individuality radiate from the previously unpublished private writings quoted in this book I was impelled to track down.

In a letter from February 10 — a fortnight before her execution, and a decade after her French kindred spirit Simone Weil modeled in her own triumph of resistance how to use our suffering as a portal to empathy — Scholl echoes the young Sylvia Plath’s longing “to be affected by life deeply” as she considers the possibility of being drafted for labor service the following summer:

I am not entirely unhappy about it, because I still want to suffer, to share the suffering of these days… to be affected more directly… Sympathy is often difficult and soon becomes hollow if one feels no pain oneself.

One comes to such fearless lucidity only through the awareness, accepted without resistance, of just how intimately the life of the body and the life of the spirit are entwined — an understanding Scholl inhabited with absolute creaturely integrity. In a diary entry vibrating with the invincibility of youth, penned in the last summer of her life not long after her twenty-first birthday, she captures the animalistic pleasure of aliveness that is the wellspring of our strength, our humanity, and the poetry of existence:

The wind tears open the blue sky, out comes the sun and kisses me tenderly. I’d like to kiss him back, but my wish is forgotten in a moment as the wind grasps me. I feel the wonderful firmness of my body, I laugh aloud for the sheer joy of finding I can resist the wind. I can feel all my own strength.

Nearly a century after Walt Whitman, who had served as a nurse to the dying in the Civil War, wrote so beautifully about optimism as a force of resistance and shortly after Holocaust survivor Viktor Frankl penned his impassioned insistence upon believing in human goodness, Scholl located her strength — the supreme strength of the human animal — in the unflinching refusal to succumb to the cowardice of cynicism. That refusal was at the beating heart of her courage and her resistance — an ethos she articulated most directly and most exquisitely in a letter penned when she was only eighteen. Nearly half a century before Maya Angelou observed that “there is nothing quite so tragic as a young cynic, because it means the person has gone from knowing nothing to believing nothing,” this resolutely uncynical young woman writes:

Complement with Hannah Arendt, writing in the wake of the Holocaust, on our only effective antidote to the normalization of evil, Susan Sontag on moral courage and the power of principled revolt against injustice, Iris Murdoch on the power of literature to dismantle tyranny, and 100-year-old Holocaust survivor Helen Fagin on how books save lives.