Edmond Privat was a leading world citizen of the first wave of world citizen action closely associated with the League of Nations.  It was natural for Privat, a citizen of Geneva, to be drawn to the efforts of the League of Nations.  He served from 1923 to 1927 as the vice-delegate for Iran.  In the early League days, many States did not have a permanent representative to the League and so named an “intellectual personality” to represent the country.  Privat also worked at different times at the League as an interpreter from English to French. 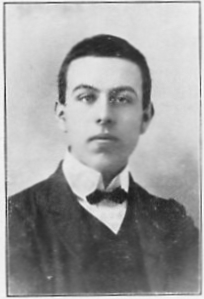 In those days, there was no simultaneous interpretation but only consecutive interpretation. The interpreter, standing near the speaker had to convey some of the same drama in his voice. Privat was an experienced orator, one of the first to make regular radio broadcasts and so was much appreciated as an interpreter. At the time, the League Secretariat staff was small, and there was a good deal of interaction among the staff and the government delegates.  Thus Privat, already a political journalist, could follow closely world events and the League efforts.

Privat was a close friend of Romain Rolland who lived during the 1920s and 1930s at Villeneuve near Geneva.  Romain Rolland was one of the first in Europe to write about the philosophy-in-acts of Mahatma Gandhi.  Gandhi had gone to London in 1931 for a government roundtable on the future of India.  Romain Rolland invited Gandhi to Villeneuve and asked Privat to translate for him and to organize two public talks for Gandhi. Privat was much impressed with Gandhi, and Privat and his wife left shortly afterwards for India to report on Gandhi’s efforts, resulting in a book Aux Indes Avec Gandhi.

Through Rolland and Gandhi, Privat became interested in Indian philosophy and shared Gandhi’s views that there was an inner light that was a common core of all the world’s religions.  As Privat wrote,

Privat had a life-long passion to promote the universal.  He looked for ways to build bridges among peoples and had learned Esperanto from childhood. As a secondary school student, he attended the first universal Esperanto congress in France in 1905. He then took on the task to organize the next Esperanto congress in Geneva in 1906.  Privat had a talent as an organizer and virtually to the end of his life in 1962 he was organizing conferences, creating committees as well as writing articles.

During the First World War, he was sent as a war correspondent to Poland where he met Ludoviko Zamenhof, the creator of Esperanto.  Later Privat wrote a biography in Esperanto Vivo de Zamenhof, translated into many languages.  From his observations in Poland, he became a champion for the liberation of Poland from Russian influence.   In 1918 Privat published L’Europe et l’Odyssée de la Pologne aux XIX siecle.

Privat’s observations of the First World War and its consequences confirmed his earlier conviction that war was evil and the result of narrow nationalism.  To overcome war, there was a need for a cosmopolitan – world spirit.  People needed to think of themselves as citizens of the world.  He saw the League of Nations as a first step toward a federation of the world.  After the Second World War, he worked actively for a stronger United Nations and the creation of a “Second Chamber” to which people would be elected rather than being appointed by governments as is the case for the UN General Assembly. He published Trois experiences federalistes (USA, Suisse, S.D.N.) on federalism as an approach to a stronger world structure.

Privat’s vision of the unity of the world included a strong emphasis on the equality between women in men − this in a country where, at the time, women could not vote or hold public office.

Today, much of the cosmopolitan-world citizen emphasis is on understanding the forces leading to world integration. Not all “globalization” works for the benefit of all people.  Nevertheless, trends are to ever grater interaction among the representatives of governments, transnational corporations, and non-governmental organizations – social movements.

There is less emphasis on a common language of communication such as Esperanto.  It is likely that English plays the role that some hoped that Esperanto would become, although Esperanto still has its champions.

Privat is an important symbol of those who worked between the two World Wars for new positive attitudes and strong inter-governmental structures that would create a climate of peace.  The tasks still face us today.

Anticopyright: Editorials and articles originated on TMS may be freely reprinted, disseminated, translated and used as background material, provided an acknowledgement and link to the source, TMS: Edmond Privat (17 Aug 1889 – 18 Aug 1962): The Inner Light, is included. Thank you.