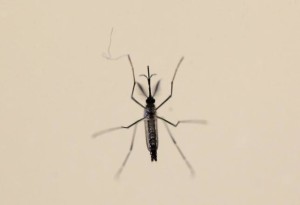 An Aedes aegypti mosquitoe is seen at the Laboratory of Entomology and Ecology of the Dengue Branch of the U.S. Centers for Disease Control and Prevention in San Juan, March 6, 2016. Reuters/Alvin Baez

21 Aug 2020 – US authorities have approved a plan to release more than 750 million genetically modified mosquitoes across the Florida Keys, despite objections from local residents.

British-based firm Oxitec are behind the project, that will test whether the altered mosquitoes can work as an alternative to pesticides to control the spread of diseases, such as Zika, dengue, chikungunya and yellow fever, according to CNN.

The male mosquito, which is named OX5034, has been created to produce female offspring that die at larval stage, before they grow big enough to spread disease and bite.

Female mosquitoes bite for blood while they mature their eggs, but males do not carry the diseases as they feed on nectar, according to Sky News.

The mosquitoes will be released in the Florida Keys in 2021, but will be expanded into Harris County, Texas, after the Environmental Protection Agency granted Oxitec’s request for an experimental use permit.

Jaydee Hanson, policy director for the International Centre for Technology Assessment and Centre for Food Safety, released a statement on Thursday, where he criticised the decision.

The Aedes aegypti has taken over the crown of the world’s most dangerous mosquito from the malaria-carrying Anopheles. The Aedes carries diseases such as dengue fever, yellow fever and Zika. Efforts are underway around the world to protect people from the Aedes aegypti and the diseases it transmits.

“With all the urgent crises facing our nation and the State of Florida — the Covid-19 pandemic, racial injustice, climate change — the administration has used tax dollars and government resources for a Jurassic Park experiment,” he said.

“Now the Monroe County Mosquito Control District has given the final permission needed. What could possibly go wrong? We don’t know, because EPA unlawfully refused to seriously analyse environmental risks, now without further review of the risks, the experiment can proceed,” Mr Hanson added.

Zika was declared an international emergency in 2016, and although it was later downgraded, the World Health Organisation (WHO) said it was still a “significant public health challenge requiring intense action” later that year.

The WHO records around 390 million dengue infections each year, as half of the world’s population are at danger of being infected, according to Sky.

This project will be the first of its kind in the US, but follows on from a similar trial in Brazil in 2016, where researchers recorded a decline in disease-carrying mosquitoes and found they did not cause harm to other insects.

Since the initial announcement of the project in May, more than 230,000 people have signed a petition against the proposal, which was supported by more than 30 local physicians.

Local media reported that residents were unhappy to be treated as “guinea pigs” for the experiment, as the petition claimed that the “GMO (genetically modified organisms) mosquitoes could pose major risks to fragile ecosystems”.

This argument was echoed by Dana Perls, a programme manager at Friends of the Earth, who released a statement on Wednesday where she said she was concerned about the damage the mosquitoes may cause to the local ecosystem.

“The release of genetically engineered mosquitoes will needlessly put Floridians, the environment and endangered species at risk in the midst of a pandemic,” Ms Perls said

However, in a statement on Wednesday, Oxitec CEO Grey Frandsen claimed that the programme will be beneficial to the area and said the company plan on working with local authorities during the project.

“Our team is incredibly thankful to the FKMCD commissioners, regulators and our diverse partners for placing trust in us. We’re ready to get to work, and we couldn’t think of better partners than the FKMCD’s professional staff and collaborators in this project.

“We’re looking forward to working hand-in-hand with the Keys community to demonstrate the effectiveness of our safe, sustainable technology in light of the growing challenges controlling this disease-spreading mosquito.”