The End of American History Begins in America

Therefore, good Brutus, be prepared to hear.
And since you know you cannot see yourself
So well as by reflection, I, your glass,
Will modestly discover to yourself
That of yourself which you yet know not of. 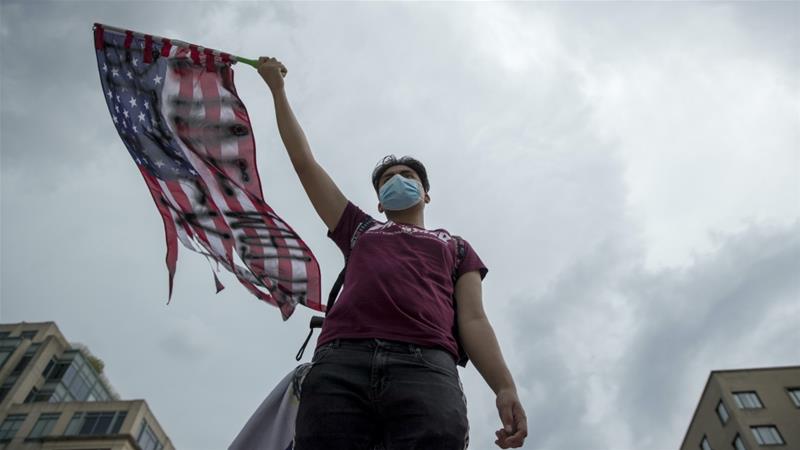 A protester waves an American flag with “Black Lives Matter” spray painted on it, near the White House in Washington, June 19, 2020. [AP Photo/Andrew Harnik]

19 Aug 2020 – Has the American experiment failed and ended? Are we on the cusp of a post-American world? In the late 1980s, Francis Fukuyama, a bureaucratic functionary at the US Department of State, had declared, with much pomp and ceremony, that “history” had ended and America was the triumphant trophy of liberal democracy. Had he inadvertently played a satirical spoof to the end of American history itself?

A mere quarter of a century later, with Donald Trump leading the United States in one calamity after another, people have begun speculating the very end of America.

While North American and Western European observers are deeply concerned about the end of the American empire, the rest of the world oscillates between a sigh of relief at the prospect and a sense of wonder and amusement as to what exactly this “ending” means. Will it be with a big bang or just a pathetic whimper? And while we are at it, when, prithee do tell, did this “leadership of the free world” begin, for it now to end, except with brute military might and a constellation of military bases around the globe to exercise it?

In a thoughtful recent essay, End of Empire, the eminent American historian Andrew Bacevich has put forward his argument as to why he believes “the sun has set on the American empire”.

As a cogent critic of American imperialism, Bacevich’s surgically precise and honest conclusion is now corroborated by the massive uprising against structural poverty and endemic racism setting the streets of major urban areas on fire from coast to coast.

“The era of US dominion has now passed,” Bacevich observes, “So Americans can no longer afford to indulge in the fiction of their indispensability, cherished in elite circles […] Subordinating the wellbeing of the American people to ostensible imperatives of global leadership – thereby allowing racism, inequality and other problems to fester at home – has become intolerable.”

What Bacevich outlines in this crucial essay is a constellation of facts – of racism and poverty at home and pathetic and dysfunctional attempts at world domination – that much of the world and in fact, most Americans themselves have known, but which today, during the presidency of Donald Trump and this criminally negligent handling of the COVID-19 pandemic, has been thrown into stark relief.

Was this America ever a leader or just a bully? Did it ever have the moral authority to shepherd a terrorised Earth?

Between Fukuyama’s pompous and absurd prognostication and Bacevich’s bold and brilliant insights, we may now wonder when did America begin and where is it wending.

What happened to the American Century?

America as an experiment is failing. Perhaps it was destined to fail from its very beginning. An idea that began with the genocide of Native Americans, thrived on the sustained course of African slavery, extended its genocidal and racist foregrounding to generations of immigrants who came to its shores to toil and suffer so that the white supremacist settler colonists prosper and enrich generations after generations, had to pay for its continued sins at some point.

That America is failing is not a new idea or a recent discovery. It is just that over the last three years, in the course of Trump’s presidency, this fact has become glaringly clear for the whole world to see. This particular president has exposed not merely his own personal vulgarity and criminal charlatanism, but also, far more importantly, the self-destructive forces that have shaped and defined this country long before he assumed office. The viral racism to which Trump caters, and to which millions of Americans respond favourably, and which is the undoing of America, arrived in America from Europe like all other diseases the settler-colonialists brought with them.

Every country and every clime has its own peculiar political disease. Egypt has given birth to el-Sisi, Russia to Putin, China to Xi, India to Modi, Brazil to Bolsonaro, Myanmar to Aung San Suu Kyi, Iran to Khamenei, Syria to Assad, ad nauseam. But the point here is the mighty and powerful US and its particular brand of imperial corruption and hubris marking its final dissolution into nullity.

Meanwhile, the delusional imperialists at the political core of the US were busy thinking otherwise. The Project for the New American Century (PNAC) was a neoconservative scheme based in Washington, DC in the late 1990s triumphantly declaring the victory of US-led neoconservative and neoliberal projects, promoting, as they put it, “American global leadership”. Led by William Kristol and Robert Kagan, all those PNAC characters today look positively ridiculous in their delusions.

Most of them staunch Zionists, they had translated the pathological colonial interests of Israel into US foreign policy and called it “a new American century!”. Before they were all exposed for their pitiful banality, they had convinced George W Bush and Dick Cheney of their prophetic missions. They destroyed an entire country, Iraq, with criminal intent, propagating their delusional myth of “American leadership”.

Today, there are sober Americans like Martin Kaplan who in his 2017 essay Trump and the End of the American Century mourns the decline of US leadership, denounces Trump, and then concludes: “We all must respond to the unexpected and depressing challenge of the United States forsaking its historical democratic and human rights leadership, both internationally and within the United States.” But what leadership, the rest of the world may wonder, when, how?

The ruling caste of the US – from its slave owner founding fathers to its current president – have been the unqualified source of misery inside and outside of the country. The ending of the calamitous delusion of that history is not something to be mourned.

The world after the American empire

A mere 20 years ago the cleanshaven neoconservative gangsters thought they were about to rule the world. Three years into the Trump presidency, amid disastrous public health failures that have exposed millions of Americans to a deadly pandemic, the very economic and human foundation of their republic is going to pieces. Massive social protest aims at an irrevocable dismantling of American racism. Streets of Oregon, Seattle, Oakland, Chicago and New York look like scenes from a military coup in Guatemala or Chile. Meanwhile, like a tinpot dictator American racism made us believe could only emerge in Asia, Africa or Latin America, the US president is dismantling the US postal system to be able to cheat and get himself re-elected.

America’s aggressions, brutal militarism, and disregard for people’s democratic will around the globe have now come full circle and boomeranged into its domestic affairs. With Trump and his Republican followers “kneecapping” the post office, as former President Obama put it, to suppress votes and guarantee the president’s re-election, the US is now en route to an election as ridiculous as the ones we have witnessed in Syria, Egypt or even Iran in the past.

The post-American world will paradoxically liberate America from its own dangerous delusions and bring American people back to the bosom of humanity at large. America will only be liberated when it comes to terms with its irredeemable racist history and dismantles all its racist institutions. And the coast to coast uprising we are witnessing today is aiming to do just that: to retrieve the repressed republican aspirations of the best of Americans and use them to dismantle the imperial arrogance of the worst.