21 Aug 2020 – In the aftermath of the split with the Socialist Workers Party minority, Trotsky was able to turn his attention to the writing of a Manifesto for the Emergency Conference of the Fourth International, which had been called to respond to the sudden expansion of the war in Western Europe. The rapid conquest of Poland by Nazi Germany in the autumn of 1939 had been followed by a protracted lull in military conflict, the so-called “Sitzkrieg.” But in April 1940 Hitler initiated a new stage in the war. The Wehrmacht moved westward, first seizing Norway and Denmark and, in May, sweeping into the Netherlands, Belgium and France.

Trotsky’s Manifesto began with a stirring appeal to all the victims of capitalist-imperialist oppression.

The Manifesto rejected all the official explanations for the outbreak of war. “Contrary to the official fables designed to drug the people,” Trotsky wrote, “the chief cause of war as of all other social evils—unemployment, the high cost of living, fascism, colonial oppression—is the private ownership of the means of production together with the bourgeois state which rests on this foundation.” [2] As in the First World War, underlying the eruption of military conflict was the rivalry among imperialist powers. 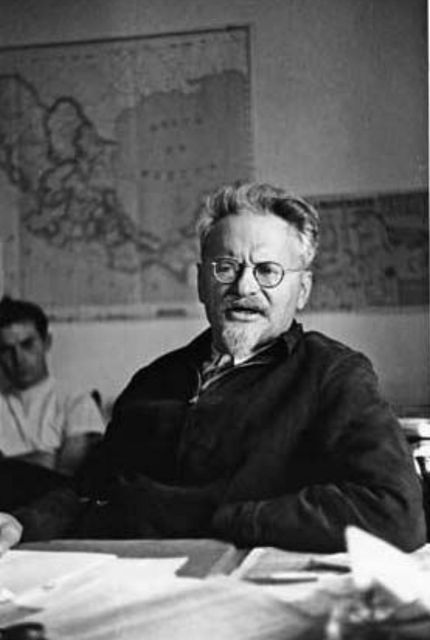 For the time being, the principal protagonists in this global conflict were Britain, France, Germany and Italy, with Japan pursuing its interests in Asia. But lurking in the background was the United States, which, Trotsky predicted, “will intervene in the tremendous clash in order to maintain its world domination. The order and time of the struggle between American capitalism and its enemies is not yet known—perhaps even by Washington. War with Japan would be a struggle for ‘living room’ in the Pacific Ocean. War in the Atlantic, even if directed immediately against Germany, would be a struggle for the heritage of Britain.” [3]

Trotsky brushed aside claims that the ruling elites were waging war in the “Defense of the ‘Fatherland.’” The bourgeoisie, he wrote, “never defends the fatherland for the sake of the fatherland. They defend private property, privileges, profits. … Official patriotism is a mask for the exploiting interests. Class conscious workers throw this mask contemptuously aside.” [4] As for the pretentious invocation of democratic ideals, these were no less fraudulent than the patriotic declarations. All the democracies, with Britain in the first rank, helped lift Hitler into power. And they all derived a substantial portion of their wealth from the brutal exploitation of the colonial peoples.

Hitler’s regime was nothing other than “the chemically pure distillation of the culture of imperialism.” The hypocritical claim that the democratic powers were fighting fascism was a blatant political distortion of history and reality.

The democratic governments, who in their day hailed Hitler as a crusader against Bolshevism, now make him out to be some kind of Satan unexpectedly loosed from the depths of hell, who violates the sanctity of treaties, boundary lines, rules, and regulations. If it were not for Hitler the capitalist world would blossom like a garden. What a miserable lie! This German epileptic with a calculating machine in his skull and unlimited power in his hands did not fall from the sky or come out of hell: he is nothing but the personification of all the destructive forces of imperialism. [5]

Trotsky then turned to an examination of the role played by the Stalinist regime in abetting the outbreak of war.

Stalin’s alliance with Hitler, which raised the curtain on the world war and led directly to the enslavement of the Polish people, resulted from the weakness of the USSR and the Kremlin’s panic in face of Germany. Responsibility for this weakness rests with no one but this same Kremlin; its internal policy, which opened an abyss between the ruling caste and the people; its foreign policy, which sacrificed the interests of the world revolution to the interests of the Stalinist clique. [6]

Notwithstanding the crimes of Stalin, an invasion of the Soviet Union by the Nazis—which Trotsky believed to be inevitable—would call into question not merely the survival of the Kremlin dictatorship but that of the USSR. The conquests of the revolution, however distorted and disfigured by Stalinism, could not be surrendered to the invading armies of imperialism. “While waging a tireless struggle against the Moscow oligarchy,” Trotsky proclaimed, “the Fourth International decisively rejects any policy that would aid imperialism against the USSR.” He continued:

Trotsky’s analysis of the war encompassed the developments in the colonial possessions, which he was convinced would become a massive theater of global revolutionary struggles. “The entire present war,” he wrote, “is a war over colonies. They are hunted by some; held by others who refuse to give them up. Neither side has the least intention of liberating them voluntarily. The declining metropolitan centers are impelled to drain away as much as possible from the colonies and to give them in return as little as possible. Only the direct and open revolutionary struggle of the enslaved peoples can clear the road for their emancipation.” [8] 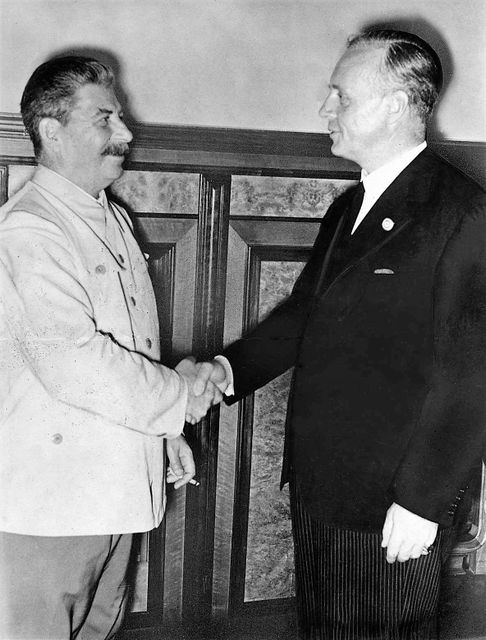 Stalin and Ribbentrop shaking hands after the the German-Soviet pact

Trotsky surveyed the economic and political conditions in China, India and Latin America. In each situation, taking into account the specific conditions, the victory of the struggle against the imperialist powers depended upon the establishment of the political independence of the working class from the corrupt and compromised national ruling elites. The theory of permanent revolution—which guided the Russian working class to power in 1917—retained full validity for the working class in all countries oppressed by imperialism. The overthrow of imperialist rule was inextricably connected to and inseparable from the struggle for workers’ power and socialism. Moreover, as the example of Russia had proved, there was no special order which determined a priori when one or another country would have conditions which allowed the working class to conquer power. Trotsky explained:

The perspective of the permanent revolution in no case signifies that the backward countries must await the signal from the advanced ones, or that the colonial peoples should patiently wait for the proletariat of the metropolitan centers to free them. Help comes to him who helps himself. Workers must develop the revolutionary struggle in every country, colonial or imperialist, where favorable conditions have been established, and through this set an example for the workers of other countries. Only initiative and activity, resoluteness and boldness can really materialize the slogan “Workers of the world, unite!” [9]

In the concluding sections of the Manifesto, Trotsky returned to the central theoretical and political issues that he had raised in the opening phase of the factional struggle against the petty-bourgeois minority and which would preoccupy him in the final weeks of his life. The outbreak of World War II was prepared by the betrayals of all the existing mass organizations of the working class, whether social democratic, Stalinist, anarchist or some other variety of reformism. How, then, would the working class find the path to power?

Trotsky reviewed the essential conditions for the conquest of power by the working class: a crisis that creates a political impasse which disorients the ruling class; intense dissatisfaction with existing conditions among large sections of the middle class that deprives the big capitalists of their support; the conviction within the working class that the situation is intolerable and a willingness to take radical action; and, finally, a program and decisive leadership within the advanced sections of the working class. But each of these conditions may develop at a different tempo. While the bourgeoisie finds itself in a political impasse and the middle class looks for alternatives to the existing conditions, the working class—under the influence of past defeats—may display a reluctance to enter into decisive struggles. Trotsky acknowledged that the betrayals during the years leading up to the outbreak of war had created a mood of discouragement among the workers. “One should not, however, overestimate the stability or durability of such moods,” Trotsky advised. “Events created them; events will dispel them.” [10]

In the final analysis, taking into consideration the complex interaction of the contradictory elements of  a fundamental societal crisis, the fate of the revolution depends upon the resolution of the problem of leadership. In confronting this problem, Trotsky posed hypothetically two questions: “Will not the revolution be betrayed this time too, inasmuch as there are two Internationals [the Social Democratic Second International and Stalinist Communist  International, also known as the Comintern] in the service of imperialism while the genuine revolutionary elements constitute a tiny minority? In other words: shall we succeed in preparing in time a party capable of leading the proletarian revolution?” [11]

In his essay, “The USSR and War,” written eight months earlier in September 1939, Trotsky had indicated that the outcome of the Second World War could prove decisive in determining the viability of the perspective of socialist revolution. “The results of this test,” he had written, “will undoubtedly have a decisive significance for our appraisal of the modern epoch as the epoch of proletarian revolution.” [12] But this statement was in the character of an obiter dictum, an incidental remark intended, legitimately, to stress the gravity of the world situation and the dangers it posed to the working class. It was not intended to be read as an unalterable historical timetable. In an ensuing document, written in April 1940, Trotsky made a critical point about the methodology of Marxist analysis:

Every historical prognosis is always conditional, and the more concrete the prognosis, the more conditional it is. A prognosis is not a promissory note which can be cashed in on a given date. Prognosis outlines only the definite trends of the development. But along with these trends a different order of forces and tendencies operate, which at a certain moment begin to predominate. All those who seek exact predictions of concrete events should consult the astrologists. Marxist prognosis aids only in orientation. [13]

By May, it is clear that Trotsky was seeking to orient the Fourth International on the basis of a perspective whose analysis extended beyond the war and its immediate outcome. The war was not only the culmination of the crisis of the post-World War I era; it was also the beginning of a new stage in the crisis of the capitalist system and world revolution. The cadre of the Fourth International had to prepare for an extended period of struggle. “Naturally,” he candidly acknowledged, “this or that uprising may end and surely will end in defeat, owing to the immaturity of the revolutionary leadership. But it is not a question of a single uprising. It is a question of an entire revolutionary epoch.”

What conclusion flowed from this appraisal of the war as a turning point in world history?

The capitalist world has no way out, unless a prolonged death agony is so considered. It is necessary to prepare for long years, if not decades, of wars, uprisings, brief interludes of truce, new wars and new uprisings. A young revolutionary party must base itself on this perspective. History will provide it with enough opportunities and possibilities to test itself, to accumulate experience, and to mature. The swifter the ranks of the vanguard are fused, the more the epoch of bloody convulsions will be shortened, the less destruction will our planet suffer. But the great historical problem will not be solved in any case until a revolutionary party stands at the head of the proletariat. The question of tempos and time intervals is of enormous importance; but it alters neither the general historical perspective nor the direction of our policy. The conclusion is a simple one: it is necessary to carry on the work of educating and organizing the proletarian vanguard with tenfold energy. Precisely in this lies the task of the Fourth International. [14]