Lanza del Vasto: The Fatal Dynamic of the West 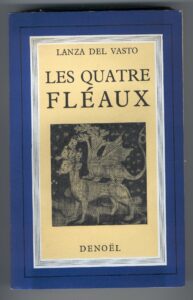 8 Sep 2020 – Sixty years ago Lanza del Vasto, Gandhi’s only Western disciple (apart from Madeleine Slade, Mirabehn) wrote these pages describing the final ending of the parable of Western Civilization, begun by the Greeks. These pages appear to be fully realized today, in the Bushian-Trumpian era of world history.

The text indicates that today Gandhian nonviolence suggests a historical awareness of times that for others are only dark; the suggestion is due to Tolstoy, Gandhi and the other great masters of nonviolence who have prepared a new civilization, that of the third millennium.

Reflecting on these pages, we understand why: Lanza del Vasto takes its motive from the unprecedented structural violence of the nuclear bomb and therefore reasons on the structural level of mankind history; in such a way he completes the intellectual effort of the masters of nonviolence to grow from a subjective thought (Tolstoy) to an objective one (of an ethical type in Gandhi, and then unrelated to personal ethics in Sharp) to eventually one that considers the social structures of violence organized by men and knows how to respond adequately to it with nonviolence; first of all by knowing how to become aware of it, and then, as his book Les Quatre Fléaux explains, knowing how to intervene to adequately fight that new type of violence, including nuclear bombs.

Unjust fate! Blind fate! But it is useless to call it unjust and blind; as much as it goes without saying that the circle is round, that the shadow is dark, and that death is horrible. It is useless to rebel against the decrees of destiny which are ineluctable, useless to struggle. Ancient legend, like the fairy tale, says that it is precisely when you try to avoid it that you fall into it.

Everyone knows what oriental fatalism is: a religious error or, better, a superstitious madness, a denial of providence, a rotting of will and intelligence. Since the unfortunate person feels the danger, he says: “It was written”; and the calamity strikes all the more fatal in that he does nothing to defend himself, as he had done nothing to foresee it.

While the other remains inert, with his eyes wide open to the void and as if stunned by amazement, this one puts effort, strives and gets tired, with attention always focused on the goal that has been set.

If, pulling his sleeve, you say to him: «Be careful, friend, don’t go on without knowing what you may encounter», he will shout at you in anger: «Let me do it! I’m in a hurry, I work, I don’t have time to listen to your stories! “.

But if you show him that, in front of him, two steps away, there is the abyss, and then he replies: “Ah, yes! It’s true; but there is no turning back.”

Fatalism is an error, but events always prove it right.

In fact, the one who believes in fatality, whether he does not do what he must do, or does what he must not do, however, meets his destiny, which is to run towards his ruin.

3. The Logic and Mechanics of Fatality

And once it has been invented, it is impossible not to sell it to the government, for the safety of the country!

And then one cannot fail to sell it to the enemy, if one wants to save the rights of science, which is universal!

And now, we certainly can’t afford to have less than him.

On the other hand, the more bombs we have, the more peace we have. The enemy, knowing that we have so many, “will reflect” (he will certainly reflect, but on what? Perhaps on the way to send us his and thus annihilate us at the first strike. It may also happen that the explosion precedes reflection; and so it is done even sooner).

We secure peace by basing it on terror. But among the reasons for waging war, the strongest is terror.

Who cares! In any case we cannot go back.

Thus, on one side and the other, each one in full awareness constructs his own death. 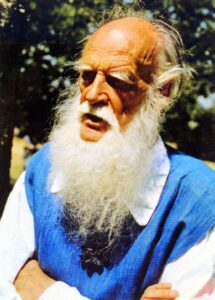 4. The Greek Origin of the Western Tragedy

“Western fatalism”; putting these two words together shouldn’t surprise us. It is the Ananké of the Greeks, who invented the term and the idea itself; and the Greeks are the fathers and founders of the Western civilization.

The Greek Tragedy suggests a lesson that is drawn from seeing the Hero struck by Destiny.

It pertains to this kind of Hero is to bear the Destiny condemning him in advance.

It condemns him from the very beginning of his being a Hero and before he makes any mistakes.

And then, by virtue of his virtues, it condemns him to commit his crime, despite himself and almost ignoring it, i.e. the crime that will justify his punishment.

Oedipus kills his father, but he ignores that he is dealing with his father.
He marries his widow, his mother, and becomes King; but he doesn’t know that she is his mother.

The plague hits the city and it is learned that the wrath of the gods derives from a double sacrilege. Being the king and therefore the executioner, Oedipus looks for the criminal; but he is the criminal himself, and he doesn’t know it!

The catastrophe is frightening in large part due to the hero’s exploits.

Since the announced catastrophe is about to arrive, but it is not known when it will come, neither why nor how; for this reason, to escape it, the Hero throws himself into the great adventure that will provide the catastrophe with its moment, its reason and its form.

The white man is not always terribly beautiful.
He has a small tie, small mustache, ballpoint pen.
Sometimes he is pale and chubby.
But don’t be fooled, he’s a hero.

He is Hercules, with his labors and his monsters; he is Daedalus with his automatic statues, his glued wings and his labyrinth; he is Prometheus with his fire and his chain.

He finds himself capable of feats that all other peoples attributed only to their gods.

He made a daily, familiar, culinary thing with the miracle.

“He rises to the sky on steel wings,
builds cities that slide on the water,
by turning a key he repeals the space.”

As Orpheus descended into hell, tomorrow he will go to the moon, a celestial hell.

Which race can resist it?

All have been downsized by force, or seduced by his artifices.

About Nature, he treats it like a beast of burden. He puts it on the bar and sometimes on the spit….

However, the hour is coming that cannot be long, the hero’s fatal hour.

And if he does not find anyone who hits him, he will tear off his eyes and injure himself, as so many heroes have done in whom the fury of execution surpasses the love of life; thus he will carry out, in his crimes as in his punishment, his own sentence, signed in advance, imprinted on him from the beginning: the original condemnation.

Let’s look closely at this “original condemnation” of Original Sin. Behold, a ray of revelation illuminates what, in the profound intuition of the Ancient Inspired, was only horror, amazement, darkness: it was the Tragedy.

In fact, even Sin, the original one, is at the same time crime, error and misfortune, and makes it weigh on the human species, on the whole human species, it makes its Fatality weigh on it.

If the hero is destined to fall because of his greatness, it is because his greatness has to do with the greatness of the luminous figure that is at the origin of the fall: Lucifer.

The hero’s disastrous splendor consists in being half god; which inflates human nature immeasurably, makes its divine nature uncertain and between the two makes an impossible juxtaposition, destined to fail.

“You will be like gods,” it was promised. In fact, the hero is not the spokesman or the servant of God, he is the demigod who serves himself, expresses himself, and honors himself. He presents sacrifices for his glory; he even steals the fire of Heaven in order for men to glorify him.

He is rich in generosity and genius. He possesses to the highest degree that virtue which is the substance of all the others: Courage.

But original sin, we well know, is without proportion to what we call morality. The greatest virtues leave it intact. Rather his great virtues become the great force of sin.

If we were to define the white man (whose figure we have begun to decipher and draw the portrait) we would say: he is the slightly baptized pagan hero.

This bit of baptism complicates his fate and aggravates his tragedy.

This baptism, he received very soon, too soon, before he had time to realize it. This is why he lives as if he had not received it.

Nothing (apart from some formulas and a few gestures), nothing in his conduct, in his feelings, in his desires, in his thoughts, in the civilization that appears in him, shows that he is different from the unbaptized.

But this baptism, divine power grafted into its nature, cannot remain inert.

With him it is necessary that the baptized either be saved or become doubly guilty.

Prof. Antonino Drago – Member of the TRANSCEND Network, formerly at the University of Naples. Allied of Ark community, he teaches at the TRANSCEND Peace University-TPU: I have a Master degree in physics (University of Pisa 1961), I am a follower of the Community of the Ark of Gandhi’s Italian disciple, Lanza del Vasto, I am a conscientious objector, a participant in the Italian campaigns for conscientious objection (1964-1972) and the Campaign for refusing to pay taxes to finance military expenditure (1983-2000). Owing to my long experience in these activities and also my writings on these subjects I was asked by the University of Pisa to teach Nonviolent popular defense in the curriculum of “Science for Peace” (from 2001 to 2012) and also Peacebuilding and Peacekeeping (2009-2013); then by the University of Florence to teach History and Techniques of nonviolence in the curriculum of “Operations of Peace” (2004-2010). I was the first President of the Italian ministerial committee for promoting un-armed and nonviolent civil defense (2004-2005). drago@unina.it.

Anticopyright: Editorials and articles originated on TMS may be freely reprinted, disseminated, translated and used as background material, provided an acknowledgement and link to the source, TMS: Lanza del Vasto: The Fatal Dynamic of the West, is included. Thank you.