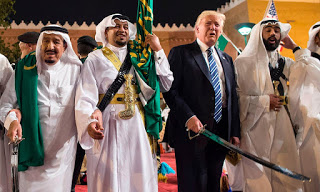 16 Sep 2020 – I am old enough to have been able to see Palestine slowly strangulated over the past few decades, with us natives who trace ancestry thousands of years here kicked out or squeezed into cantons/open air prisons like Gaza and Bethlehem.

Old enough to have researched events even before I was born and wrote books about them (like Sykes-Picot, Balfour-Cambon, Gawler, Hertzle and more).

I am old enough to have personally witnessed Arab leaders’ corruption and treachery.

I am old enough to personally witness rampant racism from white European Jews who think they are entitled to steal our land because they belong to the Jewish “people” (actually Judaism like Christianity is a religion for many people of diverse backgrounds).

I am old enough to have worked with hundreds of decent Jews and tens of thousands of decent Muslims, Christians, Hindus, Atheists, etc towards peace and justice.

I am old enough that when dates are chosen for treasonous signings like yesterday at the White House (now the name fits because it emphasized white rule), I can immediately link why 15 September (squarely in the middle of anniversaries of the Sabra and Shatila massacres and of the signing of the sell-out Oslo Accords).

I am old enough to reminisce over a good life I lived in the US (despite racism and discrimination there also) and how I gave all of that up to return to Palestine under the thumb f the Zionists. From one Israeli occupied territory to another and back!.

I am old enough to have patience for the things I can’t change, courage to change those I can (e.g. via our work in agriculture and the environment and influencing especially youth), and wisdom to know the difference. My 88 year old mother (whose Birth Certificate in PALESTINE predates this Jewish state) tells me the world will continue to change in good and bad ways (yes she remembers her friend Haya Balbisi who was massacred in Deir Yassin by Zionists who became “leaders”). Her calm wrinkled face emphasizes to me that peace is not a destination… peace is the way.

I am grateful that my family and I and millions of others of many generations remain true to our conscience and care for fellow human beings, resist tyranny and injustice, and do not join the ranks of the hypocrite dictators and “deal makers” of our world. Seeing so many good people do the right thing is itself a marvelous victory.

Reflections are still important. Is it alright for 7.5 million Palestinians to remain refugees even as dictators are propped and war criminals called “peace” makers? Why do more than half the American public think Trump is pathological liar but then do not challenge his lies about the apartheid state of Israel?

Lies like making peace between countries (who have never been at war and have ALWAYS been in the same camp fighting rights of people to self determination in Palestine, Yemen, Syria, Egypt and more).

Lies like Israel wants peace when Zionist elites are profiting to the tune of $15 billion/year from endless colonial occupation (see Shir Hever’s books and writings on the economy of the occupation).

Lies like the Palestinians are not willing to compromise or accept peace gestures when our leadership accepted “Israel” on 78% of Palestine and was willing to settle for a rump demilitarized state on 22% of the land. (and why is international law and countless UN resolutions considered irrelevant).

Lies like the “Jewish state” is democratic when they actually have dozens of laws that discriminate against non-Jews even in the areas within the green line (see https://www.adalah.org/en/content/view/7771) and hundreds of other racist discriminatory laws against us Palestinians living in the occupied areas beyond the green line http://orders.arij.org/searchMONo.php ).

Lies like the US was giving lots of money for the Palestinians who then treated the US with disrespect (US funding around the world is done in advancing US government interests including in this case helping Israel control the occupied areas).

Lies like equating resistance to colonialism with “terrorism” or “anti-semitism” (or if Jewish “self-hatred”!!) and listing essentially all groups fighting for self-determination and freedom in the Arab world and beyond as terrorists. Or engaging in economic warfare against countries like Venezuela and Iran simply for supporting right of self-determination.

The only truth spoken by Trump was in an unscripted moment (a lapse of judgement on his part) when he stated that the US is in the Middle East not for oil but to help Israel (that comment was totally ignored in Zionist controlled CNN, Fox News, etc)!

Indeed that is why the US government gave them hundreds of billions, why most of the effort of state department is directed at promoting Zionist economic and political hegemony around the world (e.g. extorting Sudan now telling them that they would be removed from states “sponsoring terrorism” only if they normalize with Israel). Why are taxpayer money being siphoned off to benefit a state that deliberately attacked a US ship in International waster (see http://www.gtr5.com/ ).

It is surreal to see the boozing womanizers from Bahrain and UAE smirk like morons as Netanyahu and Trump say openly that Jeruslaem can be visited by Muslims (under Israel’s illegal occupation for perpetuity) when they know that millions of native Palestinian Muslims and Christians cannot visit their holy places in Jerusalem.

Surreal that Netanyahu openly says that Israel power is so far out-reaching that it got them to this stage and will get them much more. How many Arab states will be pillaged and impoverished now beyond the UAE and Bahrain? (Trump says 5-6 more soon). And will the fate of these new Israeli human puppets be any different than those that preceded them working for Israel (killed, dead, living in shame now in Lebanon or elsewhere, forgotten)?

The surreal situation was foreseen by many of us who wrote and educated about these things for decades. It is not satisfying and rather sad that we predicted these scenes decades earlier (for example when the so called “Oslo accords” were signed that allowed the PLO to recognize Israel but Israel did not recognize Palestine). Well now the lines are drawn. I again ask: Is it alright for 7.5 million Palestinians to remain refugees even as dictators are propped and war criminals called “peace” makers? Why can’t we get all 6 million Jews who live here plus the 13 million Palestinians to simply vote on what form of governance they want?

You can join the side of murdering dictators and war criminals (monarchs of the Gulf + Netanyahu + Trump) who are waging war on humanity, self-determination, and justice or you find your alternative by WORKING for humanity, self-determination and justice. We must stand with the oppressed people of Saudi Arabia, Bahrain, UAE, Egypt, Palestine and elsewhere. Millions are standing with us against these tyrants. History will judge. The arc of the moral universe may be long but it bends towards justice. La luta continua!