The world sees differences of various types in races, cultures, behaviour, activities and virtually all aspects that human beings display. Some of these are innate or natural, as are the facial and bodily looks and corresponding behaviour. But some differences are acquired. For example, driving or cycling on left hand side of the road is common in England and several of its colonial countries such as India, Sri Lanka, Australia or New Zealand. In Europe, USA, Canada, one has to drive on the right hand side of the road or street.

A country, probably Sweden, used to have left hand drive till the 1970s when their government decided to become right handed as was so in the rest of Europe, from the midnight of a particular day. People used to joke that till 11.59 pm drivers were driving left handed and at the stroke of midnight, they would do Jiu-jitsu and become right handed. This word is of Japanese origin which means a set of martial arts without the use of weapons.

Not only driving left or right handed, in several other parameters, USA and the rest of the world (except England), behave differently. Most countries have metric system of distance, weights, etc., but not USA. These countries have metres and kilometres, gram and kilogram, but in USA it is feet and miles, pounds and ounces. To measure temperature we use the Centigrade system but again in America, we have the Fahrenheit system where the freezing and boiling temperatures are 32 and 212 degrees not 0 and 100 degrees, as in the Centigrade system. Now try to convert one system to the other and one will have to do some mental Jiu-jitsu.

The case of England is funny to say the least— sometimes it uses one, sometimes the other system. It is part of European Union despite the several attempts at Brexit, but its currency is pounds not Euros. Now when one says pounds in England is the reference to currency or weight? Funny and confusing at the same time!

Another European nation, Spain, apart from spreading its language through colonialism, has displayed a unique item dating about 3000 years BC. It is a crystal dagger. But what could it be used for — for cooking, for frightening a small animal or for eating ice cream? How foolish of me to say that— the world had not developed this attractive dish. Try your Jiu-jitsu for a convincing answer. 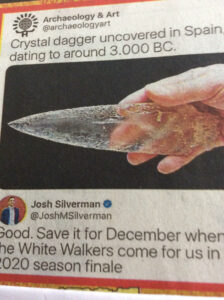 To return to USA in the sphere of electricity, their switches are upside down from the common point of view. When we want to switch off, their switches will think to switch on and vice versa. Their electric current is 120 Volts not 220 as in India. This is supposed to prevent people from getting electric shocks but not other types of shocks.

Their greeting style also differs. You can’t say Hello, you must say Hi. When there was conflict between them and France, the simple delicious French fries could not be called by that name. I can’t remember what they were called. If I do Ju- Jitsu, I could hopefully remember what the new name was. Good that the conflict is over and we know what fries mean. But another confusing item was hot dog. How did this eatable get its name?

When I was a student in USA with limited dollars in my pocket about half a century back, I still remember some funny incidents. Once our professor invited us to his home at 7 pm. I was happy since I felt I could get some good dinner without reducing the limited number of dollars in my pocket. Students and some faculty gathered at his home and we were being served drinks and some pea nuts or cookies. After about half an hour of this munching I shyly asked an American student when dinner would be served. He looked at me strangely. I repeated my question. This time he was blunt. “Didn’t you have your dinner before coming here?”

I didn’t say anything. Only later I realised that in USA one usually has one’s dinner at six or six thirty.

Countries have their customs and practices which others find perplexing. If I may say so, some of the utterances in the run up to the presidential election in USA, are funny and perplexing. Will I be hauled up for my statement? Let’s hope not. Otherwise I will ask TMS to come and haul me out of my difficulties, just at Draupadi asked Krishna to help her when her political opponents were trying to disrobe her in public.

Anticopyright: Editorials and articles originated on TMS may be freely reprinted, disseminated, translated and used as background material, provided an acknowledgement and link to the source, TMS: Socio—Politico Jiu-jitsu, is included. Thank you.