The Dehumanization Is the Point

Israeli soldiers placed IEDs at the entrance to a Palestinian village. Why is such an act so hard to believe, even after everything we’ve seen the army do? 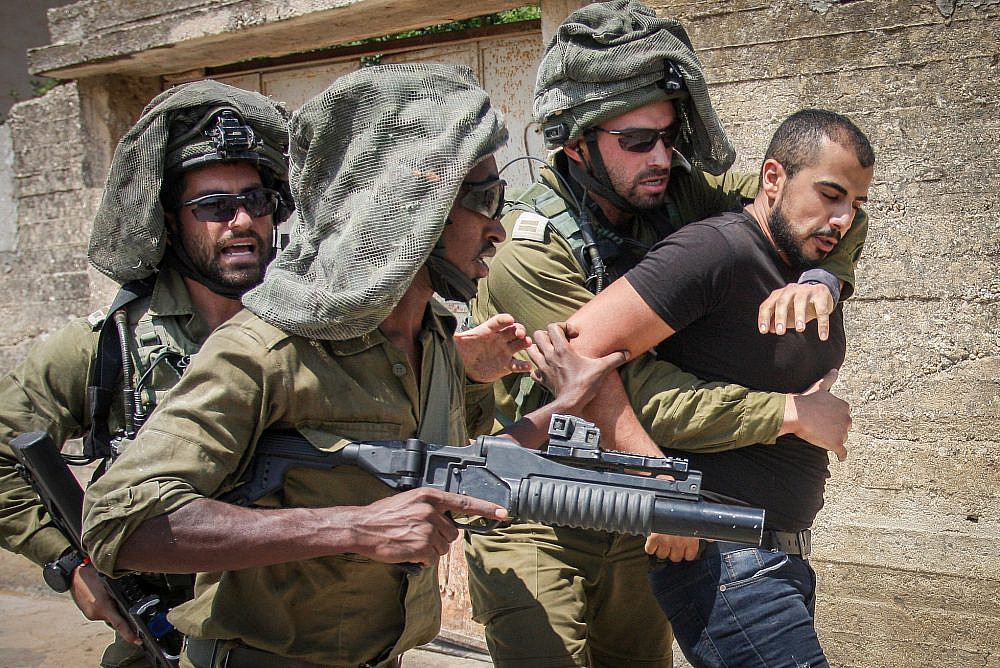 Israeli soldiers carry away a Palestinian protester in Kufr Qaddum, near Nablus in the occupied West Bank, August 23, 2019. (Nasser Ishtayeh/Flash90)

4 Sep 2020 – After 15 years of documenting protests and clashes in the occupied West Bank as part of my work for Israeli human rights group B’Tselem, I thought that nothing about the Israeli military’s suppression of Palestinian demonstrations against the occupation could surprise me. Last Thursday [3 Sep], however, I was proved wrong.

That day, residents of Kufr Qaddum, who since 2011 have been protesting weekly against the closure of the main entrance to their village, posted photos of camouflaged improvised explosive devices that Israeli forces had placed at spots where protesters gather.

I found it hard to believe that soldiers on duty had snuck into the outskirts of a Palestinian village close to its built-up area, where they know villagers roam and children play, and planted IEDs made from military stun grenades the day before a protest. They had been placed in such a way that any contact would cause them to explode.

Yet this is precisely what had happened last Thursday. The first device exploded after it was discovered by a 7-year-old who luckily did not touch it. Wasim Shteiwi, a relative who was summoned to the area and examined the device, was wounded lightly from the blast. The military admitted planting the devices, in response to a query from Haaretz reporters Hagar Shezaf and Yaniv Kubovich.

After my initial surprise, however, I thought about the things I’ve seen the Israeli military do with my own eyes over the last decade-and-a-half at the hundreds of protests I’ve attended in West Bank villages, including Bil’in, Ni’lin, Nabi Saleh, and Kufr Qaddum. I’ve seen soldiers firing live rounds at, toward, and above protesters, wounding and sometimes killing them; soldiers and Border Police officers wantonly firing crowd control weapons such as tear gas canisters and rubber-coated metal bullets at people who hadn’t posed any risk, often contradicting the military’s own open-fire policy (including the time I filmed a Border Police officer firing a rubber bullet at me, later removed from my thigh at the hospital).

I’ve filmed dozens of incidents of Israeli snipers firing 0.22 caliber bullets (known as “Ruger” or “two-twos”) at protestors in Kufr Qaddum and other villages, resulting in dozens of injuries, and killing 22-year-old Saaba ‘Obeid in front of our very eyes in Nabi Saleh. Also in Nabi Saleh, in 2011, a soldier fired a tear gas canister at Mustafa Tamimi from close range, killing him. I reached the scene seconds later, to document him lying on the ground, mortally wounded. 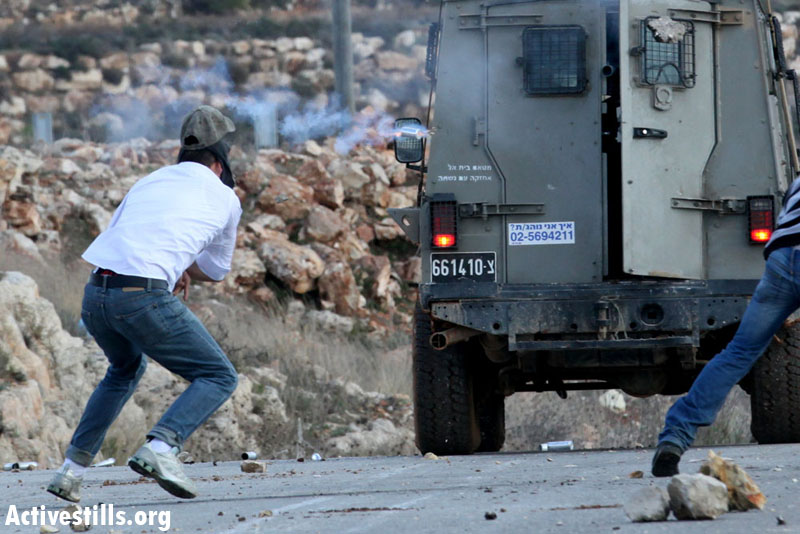 Mustafa Tamimi, a 28 year-old Palestinian from Nabi Saleh, seconds before an Israeli soldier shoots him in the face with a tear gas canister from a short distance, Nabi Saleh, December 12, 2011. (Haim Scwarczenberg)

In Kufr Qaddum and other areas in the West Bank, the military has set dogs on protestors; sprayed them with “skunk,” a foul-smelling crowd control weapon; conducted dozens, if not hundreds of false arrests; and fired at journalists documenting these incidents.

In the last year alone in Kufr Qaddum, a military bulldozer pushed boulders at protestors; the army later falsely accused the Palestinians of fabricating the video. Soldiers destroyed property — firing at water containers and slashing car tires — in front of security cameras. And worst of all, a soldier fired live ammunition, hitting 10-year-old ‘Abd a-Rahman Shtewi in the head, leaving him in an unresponsive state, and another soldier shot 15-year-old Muhammad Shtewi in the head with a rubber-coated metal bullet and gravely wounded him. The military mostly denied these acts, and no one takes a particular interest in them unless the incidents have been filmed. In such cases, the army generally issues a statement saying that the incident is “under investigation,” as with the Kufr Qaddum IED case, and that the protests in question were violent disturbances of the peace.

Palestinian demonstrators clash with Israeli forces during a protest in the village of Kfar Qaddum, near Nablus in the occupied West Bank, January 10, 2020.
(Nasser Ishtayeh/Flash90)

Israel’s violent suppression of the demonstrations is a manifestation of the very same factors that spur Palestinians in the West Bank to protest in the first place. Kufr Qaddum’s nine-year struggle is being waged against the military’s 2003 decision to close the main access road to Nablus, after the settlers from the adjacent expansion of the Kedumim settlement deemed the Palestinian residents’ presence unacceptable.

The settlement itself was partially built on Kufr Qaddum residents’ land, through the declaration of “state land,” expropriation under disingenuous legal tricks, and invasion of private Palestinian land. Other villages in the West Bank have been revolting against the harm the Israeli occupation inflicts on their lives, livelihoods, and property. The protests are also resisting the occupying regime itself, which denies Palestinians any possibility of determining their own fate.

As long as the occupation, land grab, and daily humiliation continue, so will the popular struggle against them. The demonstrations sometimes develop into clashes between armed soldiers and stone-throwing youths, but they do not involve the use of firearms by the protestors — and they are, in general, clearly civilian in nature. As such, the use of lethal force against protestors should be strictly prohibited, except in extreme circumstances of danger posed to soldiers.

Based on everything we know has happened at these protests, why it is so difficult to believe that the military had either sent, enabled, or simply did not prevent soldiers from planting IEDs to intimidate or coerce a civilian population for the sake of “deterrence”? I believe it comes from our inability to accept something far more shocking: the scope of the dehumanization and erosion of basic human dignity of the residents of Kufr Qaddum, and all Palestinians in the West Bank, that we Israelis carry out as a society and state. The prevailing belief in Israel is that we can do anything we please to the Palestinians, and that somehow, an entire people struggling against a much stronger occupying force will be deterred if we only harm, intimidate, or abuse them enough. 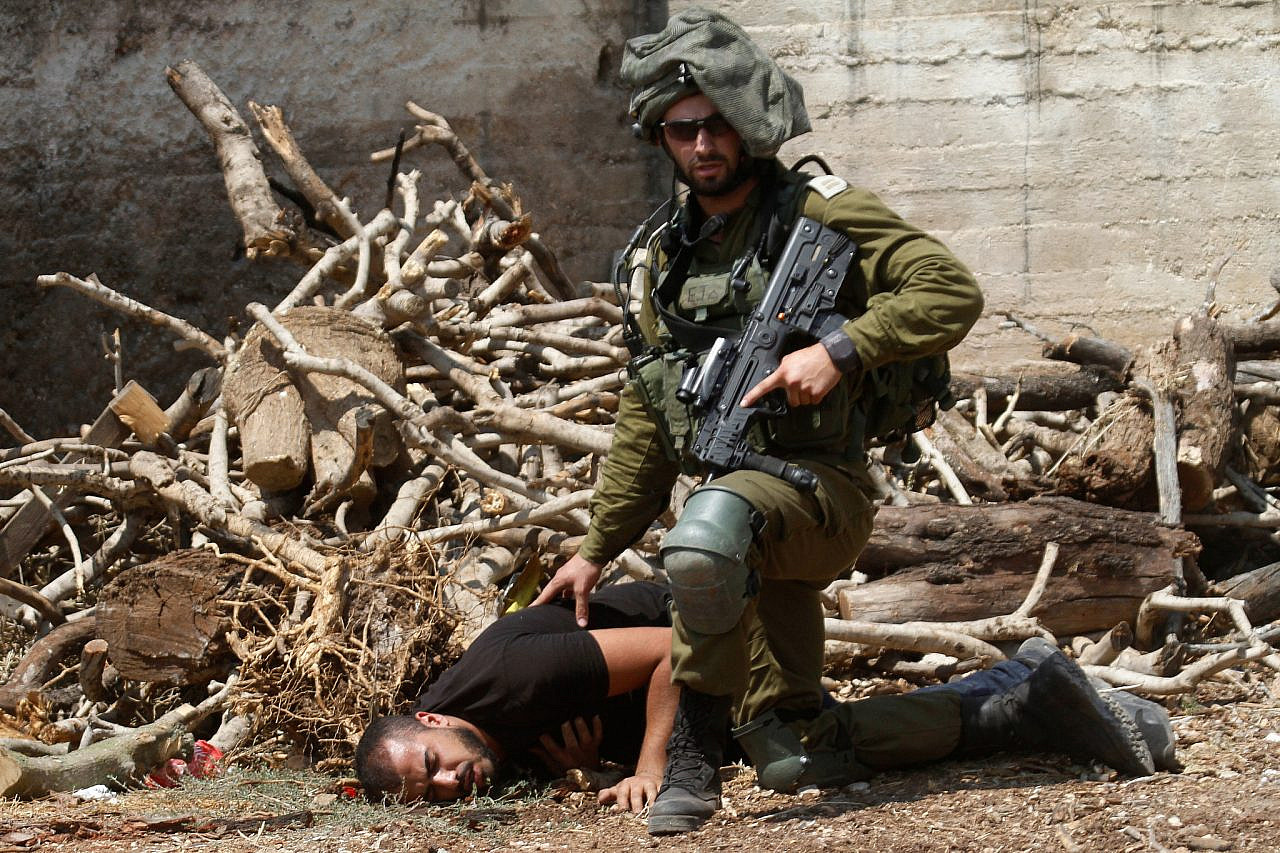 An Israeli soldier kneels over a Palestinian protester in the village of Kfar Qaddum, near Nablus, August 23, 2019. (Nasser Ishtayeh/Flash90)

This is dehumanization not only because so many believe these acts to be reasonable, but also because we assume that the Palestinians’ response towards collective punishment will be different from ours. Because their humanity is, somehow, different from ours. Israelis often use the biblical expression, “The more they afflicted them, the more they multiplied and the more they spread out” to demonstrate our resilience in the face of adversity.

The sentiment behind this phrase is not extended to Palestinians, who, by inference, are not human beings like us — which is why we can repress them with shootings, attack dogs, abuse, and collective punishment. Or with a explosive devices. If only we’ll kill, maim, arrest or demolish enough of their homes, so the logic goes, we’ll finally deter them and make them stop demanding basic rights we take for granted: the right to freedom, livelihood, and dignity.

Sarit Michaeli is B’Tselem’s international advocacy officer and the author of its 2013 report Crowd Control: Israel’s Use of Crowd Control Weapons in the West Bank.

One Response to “The Dehumanization Is the Point”