4 Sep 2020 – With Turkish war ships in the Mediterranean and the Greek army on alert, the tensions between Greece and Turkey are growing.  On 10 August, 2020, Turkey sent an oil and natural gas exploration ship, the Oruc Reis, into what Greece considers its territorial waters.  The Oruc Reis was accompanied by Turkish war ships and fighter planes.  Greek soldiers on the Greek island of Kastellorico, some two kilometers from the Turkish coast are on alert.  Jan Stoltenberg, the Secretary-General of NATO, has warned that the growing tensions may lead to violence, either intentionally or by miscalculation.

So far, governmental efforts of mediation especially that of the German Foreign Minister Heiko Mass have not produced positive results.  The Foreign Minister  of Greece, Nikos Demdias, and the Foreign Minister of Turkey have both said that negotiations were possible but not under current conditions. Both countries face real economic difficulties which lend themselves to nationalist sentiments and unwillingness to compromise. 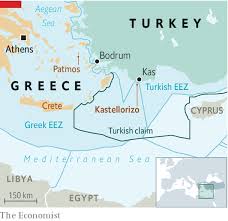 Much of the disputes centers on the concept of an Exclusive Economic Zone, a 370 kilometers zone around national territory, a concept developed in the U.N. Law of the Sea Convention of 1980.  Greece has signed the Convention, Turkey has not.  The issue, as with the current tensions in the South China Sea concerns what is the national territory – including small islands – from which the Exclusive Economic Zone is to be measured.  The situation in the Mediterranean is complicated by the close contact or overlapping Exclusive Economic Zones of Cyprus, Syria, Lebanon, Libya, Israel – all States with deep political tensions or armed conflicts.

With governmental negotiations at a standstill, the Association of World Citizens has proposed the possibility of Track II efforts to see on what issues negotiations might be possible.  The term “Track Ii ” was coined in 1982 by Joseph Montville of the US Foreign Service Institute to describe methods of  diplomacy that are outside the formal governmental diplomatic system. (1)

As the Association of World Citizens Track II proposal stated “When the very terrain of history is shifting beneath our feet, we must transform old diplomatic methods to serve new diplomatic purposes.  Building peace in today’s conflicts call for long-term commitment to establishing an infrastructure calling upon all levels of society to draw on the resources of compromise and reconciliation from within the society and maximize the contributions from outside.  There is no facile optimism as to what can be done when the U.N. or governments fail to act positively.  However, we can strive to keep channels of communication open.”  The Greek – Turkish tensions are a test case for action.

Anticopyright: Editorials and articles originated on TMS may be freely reprinted, disseminated, translated and used as background material, provided an acknowledgement and link to the source, TMS: Turkey-Greece Mediterranean Tensions: Track II Efforts Needed, is included. Thank you.