Washington Bullets: A History of the CIA, Coups, and Assassinations 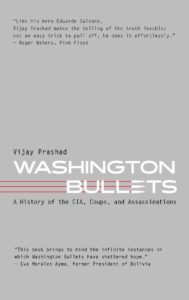 Washington Bullets: A History of the CIA, Coups, and Assassinations, by Vijay Prashad, Sep 2020, 162 pp.

While vaunting itself as an oasis of democracy, the United States, in reality, has become a superpower by infiltrating foreign governments, obliterating entire cultures, and carrying out murderous military interventions in developing countries all over the world. Washington Bullets is about U.S. imperialism—the bullets sent by various Washington, DC administrations to crush revolutions, assassinate democratically elected leaders—to destroy hope. Focusing on the rising national liberation movements in the Third World after the Second World War and continuing up to the present, historian and journalist Vijay Prashad delivers a scathing indictment of U.S. imperialism, from the 1953 CIA-sponsored coup in Iran, to the twenty-first-century ousters of Dilma Rousseff in Brazil and Evo Morales in Bolivia.

Prashad, relying on his vast library of U.S. government documents, records of multinational corporations, speeches of despots, and memoirs of functionaries (including the complete works of Henry Kissinger), has assembled a fascinating—and appalling—account of just where and how the United States has perpetrated its global “fight against terror” or “drugs” or “communism.” But embedded in the history of U.S. imperialism is the history of worldwide resistance. Washington Bullets is also a book about hope and the possibilities offered by millions of—as yet—unsung heroes. Reading these stories, we can’t help but see the need to work together to save the earth—and create a new world of real democracy for the oppressed and the masses. “We are the masses,” Evo Morales writes in the book’s preface. “And the masses, over time, will win.”

(The eBook version of Washington Bullets is available from LeftWord Books.)

“This book brings to mind the infinite instances in which Washington Bullets have shattered hope.” —Evo Morales Ayma, former President of Bolivia

“Like his hero Eduardo Galeano, Vijay Prashad makes the telling of the truth lovable; not an easy trick to pull off, he does it effortlessly.”
—Roger Waters, Pink Floyd