On the History of US Military Presence in Hawaii

19 Oct 2020 –The EIS should address the following matters:

This historical background raises a number of legal questions from the perspective of U.S. domestic law, treaty law and international law.  From U.S. domestic law, the question is what is the legitimacy of actions assumed by the U.S. government based on an occupation of territory of an independent nation of Hawaii when that occupation is founded on an unconstitutional act?

As regards treaty law, the annexation treaty signed between the Republic of Hawaii and the United States of America was done so under the terms that the treaty would be ratified in accordance with the U.S. Constitutional process which was ratification by the U.S. Senate and not by a joint resolution of Congress.  The U.S. has failed to ratify the treaty as provided for by the Constitution.  What are the implications for this historical error to the claimants of the Hawaiian nation, including not only the native Hawaiian people but the many others who can legitimately claim heirship to their inherent nationality to the Hawaiian nation?

As regards international law, what is the obligation of the United States to abide by its international commitments to abide by customary and treaty laws regarding Hawaii, the United States of America, and the international community including obligations under the United Nations Charter?  The United Nations have previously adopted the General Assembly Resolution on the Definition of Aggression whereby any claim of property which is the direct product of an act of aggression is an illegal act.  It is nothing less than a confession that the U.S. aggressed against the Hawaiian nation which brought about the eventual possession of these Hawaiian islands under the claim of the United States (see Public Law 103-150 as well as the Presidential Address to the Joint Houses of Congress, Dec. 18, 1893 by President Grover Cleveland).  While the current state of international law does not have an enforcement arm to bring the U.S. to abide by this definition of aggression, violation of this resolution still constitutes an illegal act which calls upon the honor and integrity of all to abide by the law, perhaps even more forcefully due to its moral command.  What is the appropriate response and liability of citizens of the United States of America who in the end must be held responsible for the actions of its government?  What is the individual liability of the members of the U.S. military forces who act in violation of international law?  (Remember the principles of the Nuremburg Trial made part of international law as well as of the Uniform Code of Military Justice)

The United States is a signor and the U.S. Congress has ratified the Charter of the United Nations, making the charter obligatory under Article 6 of the U.S. Constitution.  Under Article 73 of the U.N. Charter, the U.S. is obligated to bring all its territories which are regarded as non-self-governing territories to self-governance.  The United States submitted among other territories, the Hawaiian Islands as a non-self governing territory.  Among the obligation to be met by the United States is the obtaining of the free and informed choices of independence, free association or integration into the administering authority, i.e., the United States of America.  These choices were never afforded the people of Hawaii who were non-self governing.  The movement for U.S. Statehood of Hawaii was a violation of that free choice process because it was the U.S. citizens and not the non-self governing people of Hawaii who were permitted to vote in that “Statehood Vote” plebiscite in 1959.  Furthermore, the “choices” given in that plebiscite was only to become a State of the U.S. or remain a territory of the United States.  There were no choices for independence or for free association.  Thus, the sacred trust obligation assumed by the United States to bring about self-determination of the non-self governing people has not yet been met.  What are the obligations of the United States to first meet such obligations before continuing with its colonization of Hawaii?  What are the liabilities for its citizens who are eventually responsible for the acts of its nation, especially for those citizens who now know of the continuing illegality of its governmental actions?

I submit these areas of concern which should be part of the EIS in this matter. 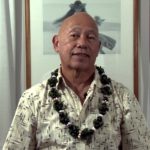 Pōkā Laenui is an attorney, founding member of the TRANSCEND Network, and lives in Hawai’i. He is regarded as the father of the modern Hawaiian Sovereignty movement having brought the issue in the Hawaii and Federal Courts since 1977 and taken that case to the UN via the Indigenous People’s hearing.  He was the primary spokesperson for the World Council of Indigenous Peoples and the Pacific Asia Council of Indigenous Peoples from 1984 to 1992.  He was noted as one of five pioneers of the development of Indigenous People’s Rights at the UN General Assembly.  He is the latest chairperson of the Native Hawaiian Convention, an elected body of native Hawaiians to develop models of Hawaiian sovereignty to propose to the native Hawaiian constituents.  This convention has been de-funded by the State of Hawaii and its domestic entity, the Office of Hawaiian Affairs, while the convention was considering a proposal for a model of independence from the USA.  He has been associated with Professor Emeritus Johan Galtung as a co-instructor at the University of Hawaii and has conducted extensive interviews with him on public radio, commercial radio and community television.  He continues to practice law in Hawaii.  His email is plaenui@hawaiianperspectives.org and website at www.hawaiianperspectives.org which contains much of his writings.

Anticopyright: Editorials and articles originated on TMS may be freely reprinted, disseminated, translated and used as background material, provided an acknowledgement and link to the source, TMS: On the History of US Military Presence in Hawaii, is included. Thank you.