2 Nov 2020 – In recent months, Brazil has staged two unprecedented joint military exercises of its Armed Forces amid escalating US threats against the Maduro government in Venezuela. Since coming to power at the beginning of last year, the Brazilian government of fascistic President Jair Bolsonaro has aligned itself with the US regime-change operation in Venezuela, turning Brazil into one of the first countries to recognize the US puppet Juan Guaidó as “interim president.” 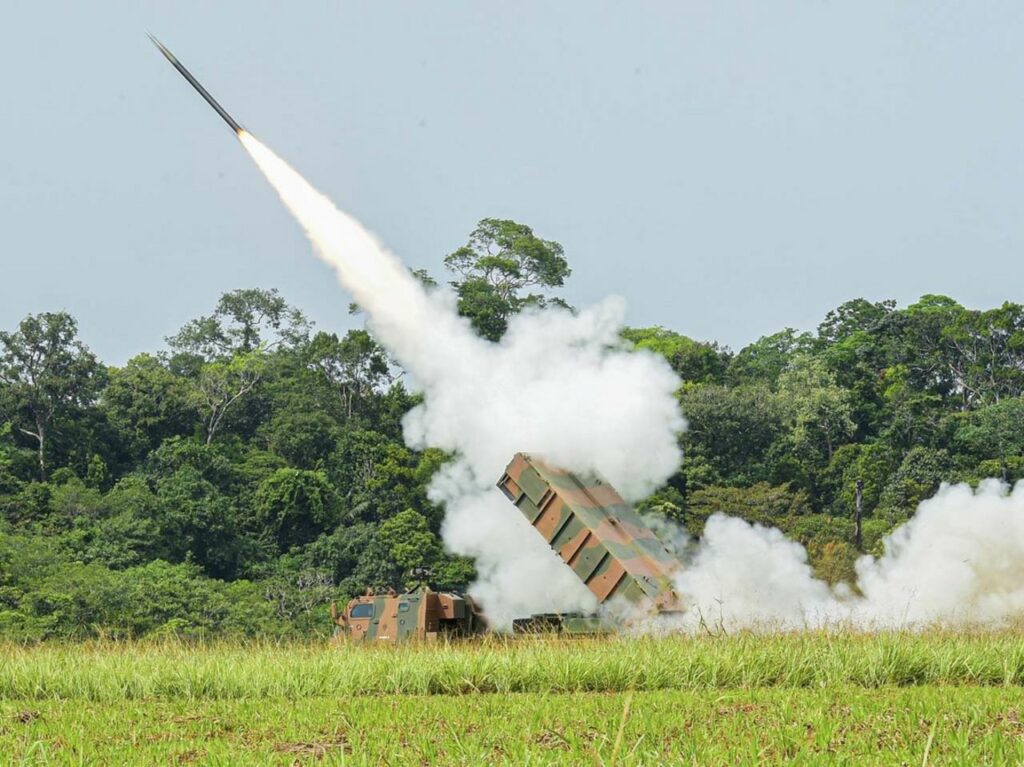 Between September 8 and 22, the Brazilian Army carried out a military exercise that simulated a war between two countries in the strategic region around the capital of the state of Amazonas, Manaus. Dubbed Operation Amazonia, it also included military exercises in the triple border region between Brazil, Colombia and Venezuela, an important drug trafficking route in the Amazon’s far west and in Brazil’s northernmost state bordering Venezuela, Roraima, where the Brazilian Army has operated a center for Venezuelan refugees since 2018.

Although similar military exercises had been previously conducted in the region, Operation Amazonia had an unprecedented character due to its size and coordination between the three branches of the Brazilian Armed Forces. With the participation of 3,600 troops from six out of Brazil’s eight military commands, it was the largest military exercise ever held in the Amazon. It involved exercises by artillery, anti-aircraft units and paratroopers, in addition to launching missiles from the Astros system, which is considered the largest weapon of the Brazilian Army.

Operation Amazonia also took place amid the largest US military deployment in Latin America since the 1989 invasion of Panama and increasing pressure from the Brazilian and US governments on Venezuela. Days before the military exercise began, the Bolsonaro government declared diplomats of Maduro’s government in Brazil “personae non grata” after the Supreme Court prevented their expulsion from the country. 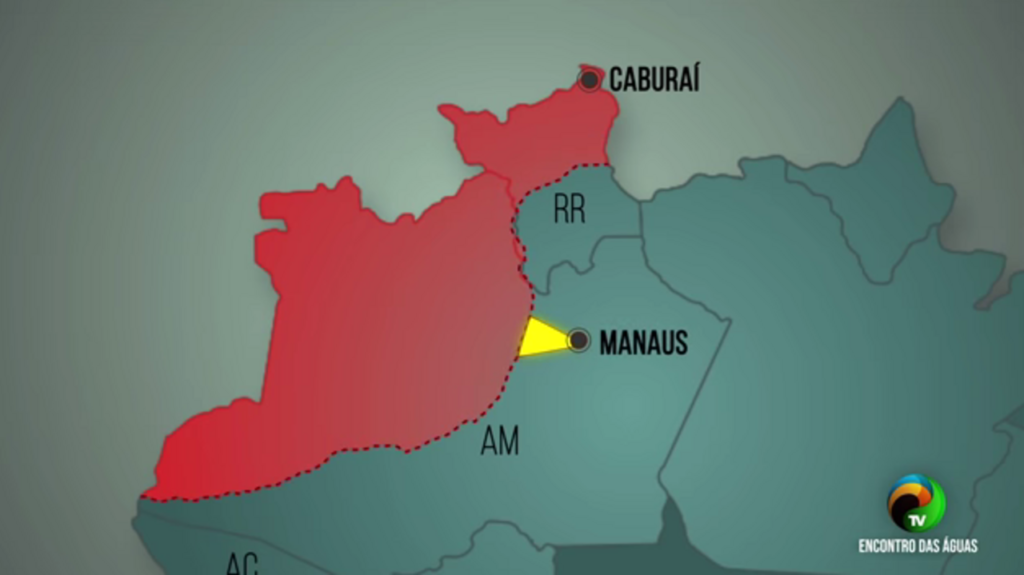 Region invaded by the “red” country, with the so called “promised delta” in yellow. (Credit: TV Encontro das Águas)

The Brazilian government’s most provocative action against Venezuela, however, occurred during Operation Amazonia itself. On September 18, US Secretary of State Mike Pompeo met in Roraima at the center for Venezuelan refugees with his Brazilian counterpart Ernesto Araújo, who called for the “end” of the “atrocious” and “drug trafficking” regime of Maduro. Pompeo then went to Colombia, where the US military was conducting joint exercises with the Colombian armed forces. Pompeo’s visit to Brazil before the US elections was declared a “provocation and harassment of a neighboring nation” by six former Brazilian foreign relations ministers.

Indeed, conducted under the pretext of defending national sovereignty against an enemy attack and protecting the region’s mineral resources, Operation Amazonia was full of references to Venezuela. The war simulation involved the “red” country’s attack on the “blue” country, which began in the Roraima city of Caburaí, on the border with Venezuela. The “red” country achieved control over the entire border region between Brazil and Venezuela and also Colombia, reaching near Manaus, in the region known as the “promised delta.”

This region has the largest reserves of rare earth elements in Brazil and one of the largest in the world. Production of these materials, which are vital for the electronics industry, is still almost entirely dominated by China. Among the strategic locations seized by the “red” country was the Urucu Region, site of the largest known onshore oil and natural gas reserves in Brazil. Local TV station Encontro das Águas reported that one of Operation Amazonia’s military exercises simulated retaking the infrastructure of the Urucu oil complex after it was seized and “nationalized” by the “red” country.

The silence of the bourgeois media in Brazil about Operation Amazonia was broken more than a month after the military exercise began. According to a report in the daily O Globo on October 15, the Defense Ministry initially refused to answer questions about the operation, which were later obtained through the freedom of information law.

O Globo and the daily Folha de S. Paulo reported that they also contacted the Foreign Relations Ministry via the freedom of information law about Pompeo’s visit to Brazil. After almost two months without any response, Folha reported last Friday that the ministry has classified diplomatic cables about Pompeo’s trip as “secret” until 2035. This decision, justified by the “risk to State security,” only reveals that the purpose of Pompeo’s visit was the elaboration of a thuggish plot. 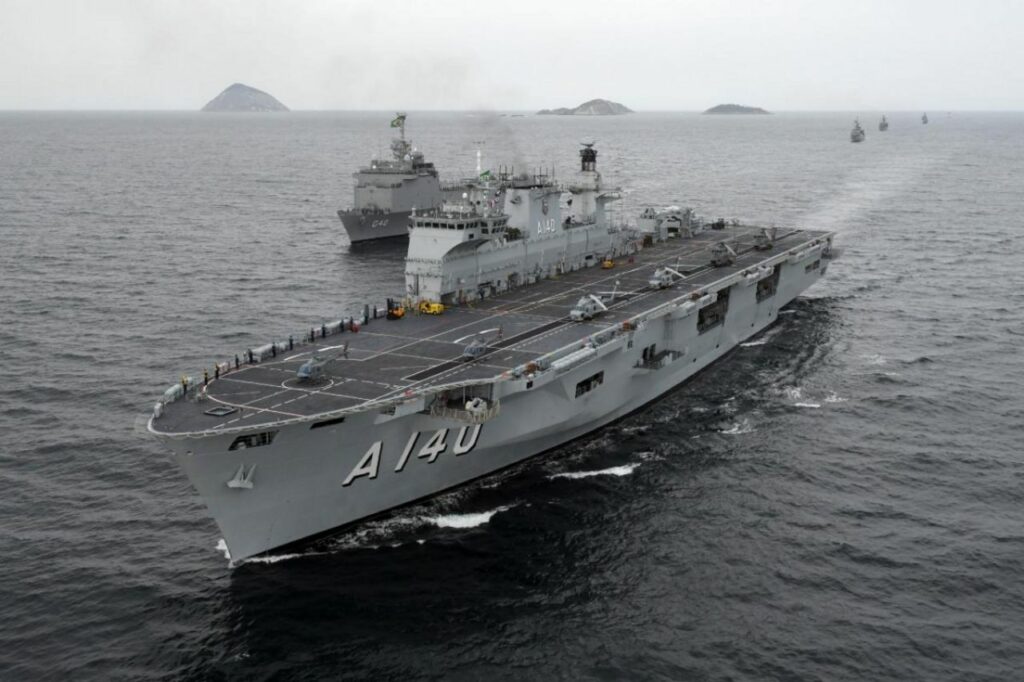 Both Operation Amazon and Operation Poseidon mark a turning point in the actions of the Brazilian Armed Forces and in their relation to US imperialism. They took place after the Bolsonaro government sent its new National Defense Strategy (NDS) to Congress on July 22. Undoubtedly, this strategy will lead to a resurgence of the Brazilian Armed Forces and a new arms race in the region.

Echoing the Trump administration’s National Security Strategy, the Brazilian version says, “in recent years the specter of strategic military conflict between the major powers has grown and competition for global supremacy has reemerged.” Regionally, the NDS highlights that “one cannot ignore the possibility of tensions and crises in the strategic surroundings, with possible repercussions for Brazil.”

The NDS explains that the regional scope of the “strategic surroundings” includes “the South Atlantic, Antarctica, and the African countries bordering the South Atlantic [which] contain significant reserves of natural resources.” Among these resources, it highlights those found in the Amazon, such as “fresh water, food, mineral resources and biodiversity,” and in the South Atlantic, where the so-called “Blue Amazon” is located, with “the largest oil and gas reserves in Brazil.” The dispute for these resources, according to the NDS, “may lead to interference in internal affairs.”

As a consequence, according to NDS, there is a “need to expand military defense spending” for “the acquisition of Defense Products.” Today, Brazil spends 1.4 percent of its GDP on it military, a figure that the defense minister has advocated be raised to 2 percent by next year.

The historical change represented by the new NDS was stressed by armed forces specialist Lucas Rezende. Writing for Intercept Brasil, he said, “For the first time since the Paraguay War (1864-1870), Brazil is formally threatening to go to war against another neighboring country to defend its interests.”

This change is linked, on the one hand, to Washington’s offensive on the South American subcontinent, historically considered US imperialism’s “backyard.” As part of its “pivot to Asia,” it seeks to counter the growing Chinese presence in the region. Since 2009, China has been Brazil’s main trading partner. With Trump, this process has accelerated with the open resurrection of the Monroe Doctrine.

On the other hand, since the trumped-up impeachment of Workers Party (PT) President Dilma Rousseff in 2016, Brazilian governments have sought to resolve the growing economic crisis, now intensified by the COVID-19 pandemic, by moving closer to the US. With Bolsonaro and his fascistic ideological affinities with Trump, this rapprochement has increased, particularly in the military sphere.

On Bolsonaro’s first trip to the US in March of last year, he and President Trump signed a technological safeguard agreement for the US to use the Alcântara rocket launching base. In return, Trump announced that he intended to declare Brazil a major non-NATO ally, which was made official in August of last year. In 2018, Colombia, the main US ally in the region, became one of NATO’s “global partners.”

Brazil’s designation as a major non-NATO ally paved the way for Bolsonaro and Trump to sign in March of this year a Research, Development, Testing and Evaluation Agreement (RDT&E), hailed by Adm. Craig Faller, chief of the US Southern Command (SOUTHCOM), as “historic.” Besides facilitating sales by the Brazilian arms industry to the US and NATO member countries, it will increase military exchanges and joint maneuvers and enable Brazil and the US to develop common defense projects.

Faller, who has made the most direct threats against Venezuela and is known for his anti-China tirades, visited Brazil in February 2019 to “discuss cooperation and bilateral partnerships in the areas of defense and security.” Most importantly, he announced the appointment of Brazilian Brigade General Alcides Valeriano de Faria Junior as SOUTHCOM’s interoperability sub commander. This appointment, which means the inclusion of a Brazilian general in the US chain of command, is unprecedented, and, in the event of a US invasion of Venezuela, could lead Brazil directly into conflict.

The latest episode of the growing US-Brazilian realignment took place on October 19, when US Security Advisor Robert O’Brien visited Brazil to sign an investment agreement involving several areas, including telecommunications. Denouncing China for cyber-attacks, he “strongly” recommended that Brazil adopt “reliable” suppliers in its 5G technology auction to be held next year. O’Brien recalled in a speech the historic partnership shared since 1822 under the Monroe Doctrine and said that Brazil and the US today “are closer than ever,” which includes a “commitment to free and fair democratic elections in Venezuela.”

This realignment has been criticized by sections of the Brazilian bourgeoisie whose interests are bound up with exports to China, such as agribusiness, and which have also been the target of tariff increases by the Trump administration. They consider “fighting with China bad business for Brazil,” as expressed by leading economic commentator Miriam Leitão, who also criticized the possibility of Brazil not adopting the 5G network of Huawei, which is already involved in 40 percent of Brazil’s telecommunications infrastructure.

With US imperialism escalating its aggressiveness in the region to compensate for its decades-long economic decline, these developments pose disastrous consequences for the Brazilian working class and youth and the threat that Latin America will become a battlefield in a regional or even world war.