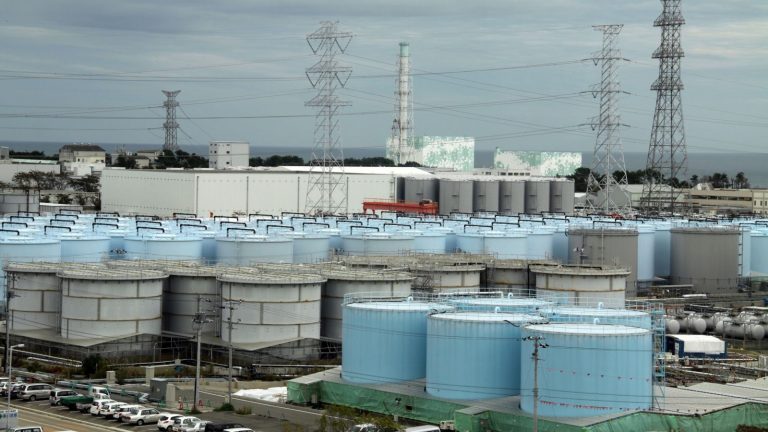 30 Oct 2020 – For nearly a decade the crippled Fukushima Daiichi Nuclear Power Plant has been streaming radioactive water into the Pacific Ocean. As it happens, TEPCO (Tokyo Electric Power Co.) struggles to control it. Yet, the bulk of the radioactive water is stored in more than 1,000 water tanks.

Assuredly, Japan’s government has made an informal decision to dump Fukushima Daiichi’s radioactive water into the Pacific Ocean. A formal announcement could come as early as this year. Currently, 1.2 million tonnes of radioactive water is stored.

The problem: TEPCO is running out of storage space.

Government of Japan’s solution:  Dump it into the Pacific Ocean.

Environmental groups insist there is no reason why additional storage tanks cannot be constructed outside the perimeter of the plant. They accuse the government of seeking the cheapest and quickest solution to the problem. All along, authorities have promised the site will be safe in 40 years. Really, only 40 years!

According to IAEA’s Director General Grossi, who visited Fukushima in February 2020, dumping radioactive water that is mainly contaminated with tritium meets global standards of practice. (Source: Michael Jacob in Tokyo, What! Is Japan Really Planning to Dump Radioactive Water From Fukushima Into the Ocean? Sweden-Science-Innovation, June 10, 2020)

In that regard, advocates of nuclear power utilize a subtle storyline that convinces, and deceives, the public into accepting nuclear power, however reluctantly. It goes something like this: “There’s nothing to worry about. Nuclear power plants routinely release tritium into the air and water. There is no economically feasible way to remove it. It’s normal, a standard operating procedure.” Nevertheless, as shall be explained in more detail forthwith, there is nothing positive about that posture, absolutely nothing!

According to TEPCO, all radioactive isotopes will be removed, except tritium, which is hard to separate. Still, similar to all radioactive substances, tritium is a carcinogen (causes cancer), a mutagen (causes genetic mutation), and a teratogen (causes malformation of an embryo).

The good news: Tritium is relatively weak beta radiation and does not have enough energy to penetrate human skin. The principal health risks are ingesting or breathing the tritium.

TEPCO has deployed an Advanced Liquid Processing System that purportedly removes 62 isotopes from the water, all except tritium, which is radioactive hydrogen and cannot easily be filtered out of water.

However, the filtration system has been plagued by malfunctions. According to Greenpeace International, within the past two years TEPCO admitted to failures to reduce radioactivity to levels below regulatory limits in more than 80% of the storage tanks. Reported levels of Strontium-90 (a deadly isotope) were more than 100 times regulatory standards with some tanks at 20,000 times.

“They have deliberately held back for years detailed information on the radioactive material in the contaminated water. They have failed to explain to the citizens of Fukushima, wider Japan and to neighboring countries such as S. Korea and China that the contaminated water to be dumped into the Pacific Ocean contains dangerous levels of carbon-14. These, together with other radionuclides in the water will remain hazardous for thousands of years with the potential to cause genetic damage. It’s one more reason why these plans have to be abandoned.” (Source: Fukushima Reactor Water Could Damage Human DNA if Released, Says Greenpeace, The Guardian, October 23, 2020)

Cancer is the main risk to humans ingesting tritium. When tritium decays it emits a low-energy electron (roughly 18,000 electron volts) that escapes and slams into DNA, a ribosome or some other biologically important molecule. And, unlike other radionuclides, tritium is usually part of water, so it ends up in all parts of the body and therefore, in theory, can promote any kind of cancer. But that also helps reduce the risk because tritiated water is typically excreted in less than a month. (Source: Is Radioactive Hydrogen in Drinking Water a Cancer Threat, Scientific American, Feb. 7, 2014)

Some evidence suggests beta particles emitted by tritium are more effective at causing cancer than the high-energy radiation such as gamma rays. Low-energy electrons produce a greater impact because it doesn’t have the energy to spread its impact. At the end of its atomic-scale trip it delivers most of its ionizing energy in one relatively confined track rather than shedding energy all along its path like a higher-energy particle. This is known as “density of ionization.” As such, scientists say any amount of radiation poses a health risk.

According to Ian Fairlie, Ph.D. (Imperial College/London and Princeton University), a radiation biologist and former member of the 3-person secretariat to Britain’s Committee Examining the Radiation Risks of Internal Emitters: “At the present time, over a million tonnes of tritium-contaminated water are being held in about a thousand tanks at the site of the Fukushima Daiichi nuclear power station in Japan.  This is being added to at the rate of ~300 tonnes a day from the water being pumped to keep cool the melted nuclear fuels from the three destroyed reactors at Fukushima. Therefore new tanks are having to be built each week to cope with the influx.” (Source: Ian Fairlie, The Hazards of Tritium, March 13, 2020)

Furthermore, radioactive contaminants in the tanks, such as nuclides like caesium-137 (an extremely deadly isotope) and strontium-90 (which is equally deadly) in reduced concentrations still exist in unacceptable high levels. According to Fairlie: “These problems constitute a sharp reminder to the world’s media that the nuclear disaster at Fukushima did not end in 2011 and is continuing with no end in sight.”

“There are no easy answers here. Barring a miraculous technical discovery which is unlikely, I think TEPCO/Japanese Gov’t will have to buy more land and keep on building more holding tanks to allow for tritium decay to take place. Ten half-lives for tritium is 123 years: that’s how long these tanks will have to last – at least. This will allow time not only for tritium to decay, but also for politicians to reflect on the wisdom of their support for nuclear power.” (Fairlie)

Meanwhile, over the course of seemingly endless years, Fukushima Daiichi remains “the world’s most dangerous active time bomb” for several reasons, and spent fuel rods are at the top of the list.

In addition to the 800 tons of lava-like molten fuel, aka: corium, (the big meltdown) in the three reactor containment vessels, the crippled reactor buildings contain more than 1,500 units of used nuclear fuel rods in open pools of water and must be kept cool at all times or all hell breaks loose. Loss of water from structural damage or another major earthquake (the structures are already seriously compromised) could expose the fuel rods, resulting in uncontrolled massive release of sizzling radiation that could be worse than the original meltdown, possibly exposing Tokyo to an emergency mass evacuation event with people running and screaming.

Tokyo Electric Power has plans for complete removal of the dangerous fuel rods by 2031. That work is being carried out remotely from a control room about 500 metres distance due to extraordinarily high radiation levels inside the reactor buildings.

Yet, with 440 operating nuclear plants worldwide, and 50 new plants under construction, there are plans to build a few hundred more.

Robert Hunziker, MA economic history, DePaul University, awarded membership in Pi Gamma Mu International Academic Honor Society in Social Sciences is a freelance writer and environmental journalist who has over 200 articles published, including several translated into foreign languages, appearing in over 50 journals, magazines, and sites worldwide. He has been interviewed on numerous FM radio programs, as well as television.