The Earth is one of the planets of the Sun — third closest after Mercury and Venus. Many of its features of Earth have already been discovered. It takes a year to revolve around the Sun and it rotates on its axis in 24 hours causing day and night.

Scientists have already discovered the hottest, the coldest, the rainiest places of Earth. Earlier Cherrapunji in the north eastern state of Meghalaya in India used to receive the maximum amount of rain. Now another neighbouring town has earned this distinction. Colombia, South America and New Zealand also receive large amounts of rainfall.

Death Valley   in California has recorded the highest temperature of 57 degree C, in the world. A temperature of even 45 degrees is unbearable; imagine how hot the   Death Valley must be. The coldest place is the South Pole in the Antarctica which recorded a mind boggling temperature of minus 89 degree C a few years back.

While the above parameters are within our intellectual grasp even if we may not know the names of the geographical areas, there is one dimension I had never heard of earlier. This is — which is the hottest river in the world? In fact what is significance of a hot river? Is it in terms of its average temperature or in terms of some other unknown parameter?

As it turns out, it is in terms of temperature which is about 90 degree C in some stretches of the Amazon River. We must remember that 100 degree is the boiling point of water so 90 degree is really hot. The Amazon River passes through six different countries in South America — starting from Peru, Ecuador, Colombia, Venezuela, Bolivia, and Brazil and then it flows into the Atlantic Ocean at three different exit points.

The river is one of the longest in the world — about 6,400 km long.   In several regions it meanders through the regions surrounded by the Amazon rainforest. These regions display biodiversity and wildlife and support the austere lifestyles of indigenous peoples living there. Fortunately, although some people may not agree with my remark, modernity and globalisation have not penetrated this region unlike other countries like Australia, New Zealand and even parts of India, where tribal languages and cultures have all but disappeared. Like other peoples elsewhere, the local tribals feel a spiritual bonding to the river and the rainforest.

Since the river in some regions of Peru is really hot, one can even boil an egg or cook rice in it if the vessel is enclosed for the required period of time. Where does its heat come from? It comes from deep beneath the surface of the earth. We know that the Earth is very hot inside and gives rise to volcanoes also. Thus the river’s heat originates from the geothermal energy.

Occasionally some animal that falls into the hot waters gets burnt and killed. Swimming in the Amazon River is quite challenging because of the heat and some strange species of sea animals. Nevertheless some intrepid persons do swim in the river and share their experiences. It is mentioned that despite the presence of some of the sea animals such as caimans or parasitic fish in the river, human fatalities are very rare.

Some hardy people try to go to uncharted places in the world such as climbing the highest mountain or swimming to the South Pole or volunteering to travel in space ships. Some people circle the Earth in a sailing boat. Similarly, the Amazon River holds a fascination for the rare and intrepid people of the world.

As long as there are challenges — physical or intellectual on our planet, some brave hearts will rise and meet these challenges. 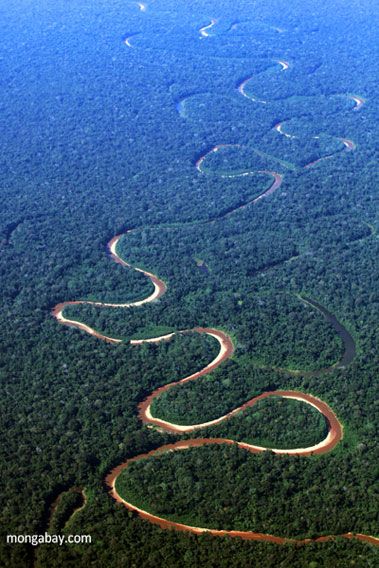 Anticopyright: Editorials and articles originated on TMS may be freely reprinted, disseminated, translated and used as background material, provided an acknowledgement and link to the source, TMS: Earth — Some Unusual Features, is included. Thank you.