I only Wish…That the Truth Has a Tongue

All your armies. All your fighters,
All your tanks and all your soldiers,
Against a boy holding a stone,
Standing there all alone,
In his eyes I see the sun,
In his smile I see the moon,
And I wonder I only wonder,
Who is weak and who is strong,
Who is right and who is wrong,
And I wish — I only wish,
That the truth has a tongue. 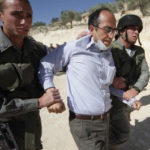 Anticopyright: Editorials and articles originated on TMS may be freely reprinted, disseminated, translated and used as background material, provided an acknowledgement and link to the source, TMS: I only Wish…That the Truth Has a Tongue, is included. Thank you.